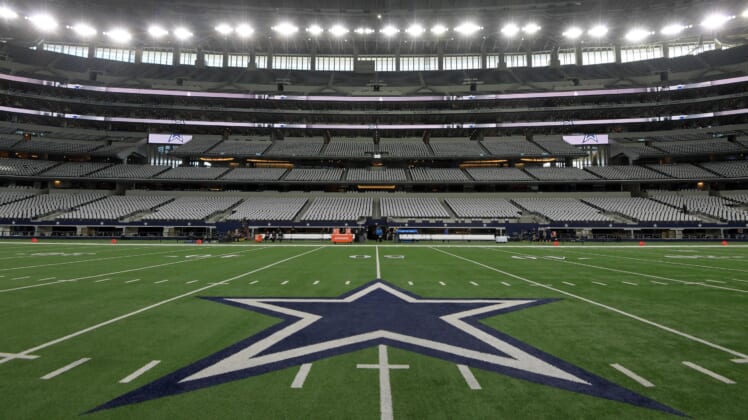 The Dallas Cowboys have done their best to improve throughout 2020 with a big trade, shakeups at the quarterback position and — ahem — bold in-game decisions by head coach Mike McCarthy, but amid a disastrous season, America’s Team is showing lackluster offensive line depth, headlined by the latest injury to versatile All-Pro Zack Martin.

After trading for Everson Griffen as part of a series of moves before Week 8‘s NFL trade deadline, Dallas lost twice to Philadelphia and Pittsburgh before a surprise win against Minnesota off its bye. Unfortunately, the Cowboys’ 41-16 blowout loss to Washington on Thanksgiving Day got worse when buzz about Martin’s health status began to surface.

NFL Network insider Ian Rapoport reported on the discouraging outlook, and suggested that the timeline above may be optimistic if Martin wants to be fully healed before returning to the gridiron, Thus, Martin may be out of action for the remainder of 2020, although he could probably play again if he pushed for it.

Tough call, right? On one hand, the Cowboys are still only one game behind Washington for the lead in a woeful NFC East division. It’s there for the taking if Dallas can form some semblance of competence down the stretch. Sadly, Martin joins a long line of players from the team’s typically stout offensive trenches platoon to land on the injured list. Winning the division at this point may not be in the ‘Boys’ best interest for future competitive purposes.

All-Pro center Travis Frederick retired prior to the 2020 season, which already set the Cowboys’ o-line unit back. In addition to seeing star quarterback Dak Prescott go down for the year, Dallas has lost stud left tackle Tyron Smith and starting right tackle La’el Collins. Even those who were filling in previously vacates roles like Cameron Erving, Mitch Hyatt and Tyler Biadasz are all out of action as of now.

But Martin is a particularly tough blow. Versatile enough to play any of the five positions on the offensive front, the 30-year-old who was famously drafted over Johnny Manziel has turned out to be a four-time, first-team All-Pro and a six-time Pro Bowler.

Cowboys fans can’t really be expecting much from the offense at this point. If Prescott were still healthy, he could run around and still make some plays, but with the less-athletic Andy Dalton under center, the chances of Dallas putting together a decent offense are slim to none. It’d be the case for almost any team without a top-three quarterback.

According to NFL Network’s Mike Garafolo, the Seattle Seahawks are among a handful of NFL teams that called the Cowboys about Aldon Smith. Ultimately, they were all informed that the 6-foot-4 pass rusher will be staying in Dallas.

It’s a bit surprising that the Cowboys aren’t even willing to discuss a trade. They signed Smith to a cheap, one-year contract and he was reinstated after a five-year hiatus.

Since returning to the field, the 31-year-old has been one of the team’s few reliable players on the defensive side. While he only has two sacks and five quarterback hits in seven games, he boasts the 16th highest pass-rushing grade (74.4), per Pro Football Focus.

Given his cap-friendly contract and his outstanding abilities, Smith would certainly net the Cowboys a fifth-round pick in the 2021 NFL Draft. But, per Garafolo, Jerry Jones is instead focused on a contract extension.

In this team’s defense, they still have a shot at winning the NFC East. While those odds are dwindling by the week, trading Smith would be another step back for the NFL’s worst defense.

It won’t be a surprise if the Cowboys sell more pieces before the NFL trade deadline on Tuesday. However, the likes of Smith, Michael Gallup and Demarcus Lawrence will remain in Dallas.