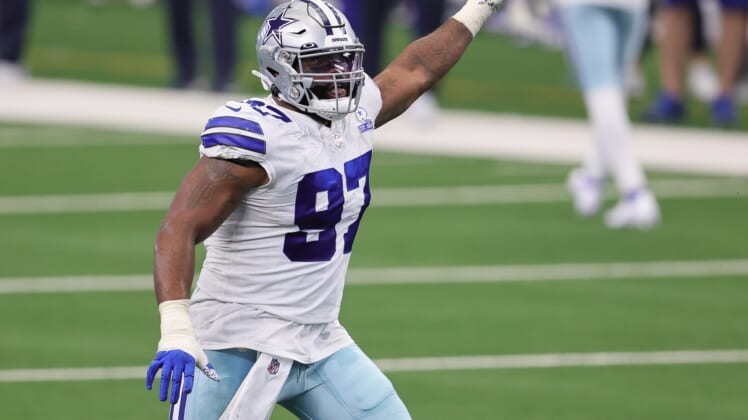 It appears that the Dallas Cowboys might be on the verge of throwing in the towel for the 2020 NFL season. At 2-5 and going nowhere fast, Dallas is selling off some of its veteran assets. That includes the Cowboys trading Pro Bowl defensive end Everson Griffen to the Detroit Lions on Tuesday.

According to NFL Media’s Ian Rapoport, Dallas has acquired a conditional sixth-round pick in return for the four-time Pro Bowl performer.

This is somewhat of a surprising move in that the Cowboys signed Griffen to a one-year, $6 million contract about 2.5 months ago.

The former Minnesota Vikings star had recorded six quarterback hits and 2.5 sacks in seven games with the Cowboys this season.

Is this an indication that the Cowboys are giving up on the 2020 NFL season?

Jones spoke with a local radio station on Tuesday. He was not his normal self, going off on those interviewing him at the time. However, the longtime Cowboys owner did indicate that there would be player personnel moves ahead of the Nov. 3 NFL trade deadline. He did not get into specifics.

Hours later, the Cowboys traded one of their biggest off-season acquisitions. That can’t be seen as a coincidence. The question here is whether Dallas also plans to add talent at the deadline. Despite boasting a 2-5 record, the Cowboys are just one-half game behind the Philadelphia Eagles in the NFC East heading into their Week 8 contest.

Breaking down Everson Griffen trade from the Lions’ perspective

Winners of two consecutive games, the Lions head into their Week 8 outing against the Indianapolis Colts with a 3-3 record. These two wins have pretty much saved head coach Matt Patricia’s job. The same can be said for general manager Bob Quinn.

Does this suggest the Lions will be even more active head into the Nov. 3 NFL trade deadline? That seems to be a reasonable assumption.

Griffen, 32, averaged 21 quarterback hits and nine sacks from 2012-19 with the division rival Vikings. He’ll join a Lions squad that has registered a mere eight sacks in six games this season.