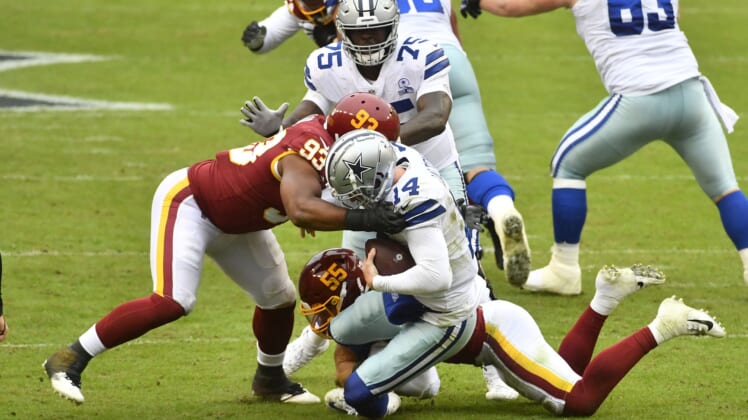 The Washington Football Team was having its way against the Dallas Cowboys during NFL Week 7 on Sunday, boasting a 22-3 lead more than halfway through the third quarter.

Playing without the injured Dak Prescott, Dallas was forced to rely on a struggling Andy Dalton at quarterback. As we saw during last week’s blowout loss to the Arizona Cardinals, the end result was not great under center.

Unfortunately for embattled head coach Mike McCarthy and the Cowboys, they’re now dealing with another injury. Dalton had to leave the game in the third quarter after a blatantly dirty hit by Washington linebacker Jon Bostic.

This is not for the faint of heart.

That’s just some brutal stuff right there. Rightfully, Bostic was ejected from the game immediately after laying this dirty hit on Dalton.

The quarterback was ultimately assisted to the locker room. We’ll obviously have further updates on his status as they become available.

Dalton’s backup, Ben DiNucci, entered the game and completed a 32-yard pass on his first even NFL attempt.

As for the Cowboys, their season is already on the brink. Dallas headed into Week 7 with a 2-4 record and yielding a whopping 36.3 points per game.