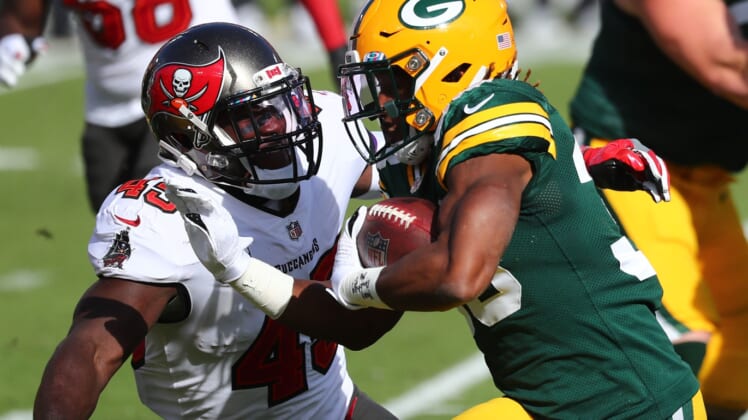 The NFL injury report is crowded once again for Week 8, with top fantasy stars like Christian McCaffrey, Michael Thomas, Aaron Jones and Odell Beckham Jr. all sidelined. From season-ending injuries to potential returns, there are plenty of injury updates to follow around the NFL.

Our focus starts early with Carolina Panthers running back Christian McCaffrey, who landed on injured reserve after Week 2. The consensus No. 1 overall pick in fantasy drafts before the season, he is now closing in on a return to the field.

Sadly, the injury news isn’t all positive around the NFL. In an all too familiar theme this season, Odell Beckham Jr. became the latest star to suffer a season-ending injury.

With plenty of updates to get to, let’s jump into the NFL injury report and our early fantasy analysis for Week 8.

NFL Week 8: Schedule and predictions for every game

Sadly, OBJ’s season will once again be marked by an injury. He fought through a hernia injury in 2019, but came back healthy this season. Now, just a few weeks after a monster game against the Dallas Cowboys, a knee injury will sideline the star wide receiver.

The Browns announced Monday that Beckham Jr. suffered a torn ACL and is expected to miss the remainder of the season. A potential trade candidate during the season, the Browns will now hold onto OBJ and see where he is at in training camp next summer.

Because Beckham went down early in Week 7, we saw a glimpse of how this offense will operate without its No. 1 receiver. Baker Mayfield surprisingly thrived, completing 22-of-23 passes with five touchdowns after missing his first five throws. It’s a promising sign for his fantasy stock, but he’ll be a risky QB1 in Week 8 against the Las Vegas Raiders.

At wide receiver, Rashard Higgins gains the most fantasy value. Off the fantasy radar before the injury, Higgins hauled in six receptions for 110 yards against the Cincinnati Bengals. He’ll be a WR4 in a run-heavy offense. As for Jarvis Landry, he’ll draw more targets, but the lack of explosive plays limits him to WR3 status in PPR leagues.

Labeled a breakout fantasy star before the season, many were hopeful that Drake could become an RB1 in Arizona’s offense. Instead, at least until his monster 164-yard performance in Week 7, Drake was one of the biggest fantasy disappointments this year.

Just when he started to gain momentum, things have taken another turn. Drake was carted off with an ankle injury late in Week 8 against the Seattle Seahawks. According to ESPN’s Adam Schefter, an MRI diagnosed him with a slight ligament tear in his ankle and he will miss a few weeks.

The Cardinals have a Week 8 bye, so fantasy owners won’t be impacted immediately by the injury. However, Drake’s multi-week absence carries serious fantasy implications. Chase Edmonds has vastly outperformed Drake this season, both in yards per carry (6.1, 4.3) and yards per catch (8.5, 4.1).

At minimum, Drake will miss Week 9 against the New England Patriots. Edmonds instantly becomes a high-end RB2 for that matchup and retains that value as the primary running back. The Cardinals love his skills and he is a weapon carrying the football or catching it out of the backfield. Frankly, a multi-week absence for Drake might lead to Edmunds taking the job for good.

The fantasy community doesn’t exactly love green Bay’s medical staff. Notorious for being very conservative with injuries, they even angered Davante Adams with their cautious approach. Once word broke that Aaron Jones suffered a minor calf strain late last week, it was obvious he would miss Week 7.

The Packers made it a game-time decision, but ultimately listed him among the inactives. However, he was questionable for that game and believes he could have played through it. Jones missed practice on Friday and the team is now ruled out for Sunday’s game against the Minnesota Vikings.

Jones, one of the best producers in fantasy this season, missed out on a great matchup against the Houston Texans. In his absence, Jamaal Williams stepped in and thrived with 114 scrimmage yards and a rushing touchdown on 23 touches. On deck in Week 8, Green Bay faces the Minnesota Vikings and a defense allowing 127 rushing yards per game this season.

Green Bay’s history of being delicate with injuries made the difference here. With the Packers also set to play on Thursday Night Football in Week 9, the choice became obvious. Williams will step in as the featured running back in Green Bay’s offense and instantly becomes a fantasy starter for Week 8. He will be a mid-range RB2 against the Vikings.

It’s been a season to forget for Michael Thomas. After setting the NFL’s single-season record for receptions (149) in 2019, he was a top-five pick and WR1 off the board. He hauled in just three receptions for 17 yards in Week 1 and hasn’t played since.

First, it was the high-ankle sprain that sidelined him from Week 2-4. On the verge of returning for Week 5, he was suddenly suspended for fighting a teammate. He then missed Week 7 with a hamstring injury.

Thomas showed signs of a return late this week, as a limited participation in practice on Thursday and Friday. However, the Saints have ruled him out for Sunday’s game against the Chicago Bears.

New Orleans will be without three of its top receivers in Week 8. Thomas, Marquez Callaway and Emmanuel Sanders will all be inactive. In their absence, Tre’Quan Smith figures to the highest share of target among the receiving corps. He is a risky WR3 in a tough matchup.

Alvin Kamara, who looks like the NFL’s Offensive Player of the Year, will benefit from a fantasy perspective with these injuries. While things will be difficult against Chicago’s defense, Kamara is a top-three running back for Week 8 and a strong bet for 100-plus scrimmage yards.

Not only did the Seahawks suffer their first loss in Week 7, but Chris Carson also went down with a foot injury. He was held out for the remainder of the game and it now appears likely he will miss Sunday’s game against the San Francisco 49ers.

Carson suffered a mid-foot sprain in Week 7. While the injury isn’t severe, he is questionable for Sunday’s game. It marks another blow for a backfield that is already without Rashaad Penny, who is on injured reserve, and will likely play without Carlos Hyde (hamstring).

At the start of the week, it seemed unlikely that Carson would play in Week 8. However, he continues to show the ability to pay through pain and seems to heal faster than others. If he can’t play, DeeJay Dallas might be Seattle’s featured running back. He would be a risky RB3 in PPR scoring, but would sustain some value thanks to his hands out of the backfield.

Robinson’s return to the lineup is fantastic news for the Bears and fantasy players. Of course, he will draw a tough matchup in Week 8 against the New Orleans Saints. He primarily lines up outside, which means drawing one-on-one coverage from Marshon Lattimore, who does well when facing great competition. Robinson should also see snaps as a slot receiver, a more exploitable matchup. He ranks as a top-10 wide receiver for Week 8.

Julian Edelman hasn’t looked like himself this season, with a knee injury clearly limiting him on the field. After another rough performance, the former star receiver underwent knee surgery on Thursday, per ESPN’s Adam Schefter. While the procedure is standard and won’t end his season, there is no timetable for his return.

Heading into Week 8, the NFL’s worst receiving corps finds a way to get worse. From a fantasy football perspective, no player is worth starting from New England’s offense. While a trade could change things, a deal is far from a guarantee.

Reagor’s rookie year started with a slight tear in his labrum during training camp, but he managed to make it back faster than expected. He showed plenty of flash in his first two games, hauling in five catches for 96 receiving yards and providing this offense with a needed big-play threat. Sadly, a torn UCL in his thumb was another setback for the 2020 first-round pick.

While Reagor might have bad injury luck, he seems to heal relatively quickly. The Eagles activated him off injured reserve on Monday, designating a 21-day window for him to return. He is ahead of schedule in his recovery, an initial 6-8 week timetable, and catching footballs. Better yet, he is expected to play on Sunday Night Football against the Dallas Cowboys.

From a fantasy perspective, this is a player worth stashing. He averaged 15.2 yards per catch at TCU and that was with some of the worst quarterback play in college football. We know Carson Wentz needs playmakers and that is something Reagor can do. He’s already owned in dynasty leagues, but this speedster can have a DeSean Jackson-like impact for fantasy teams. Reagor is a WR3 in fantasy for Week 8, with obvious risks and rewards.

This will be a season the Cowboys want to bury forever. Losing Dak Prescott was heartbreaking, practically ending this team’s slim hopes of playoff contention. On top of that, the offensive line has been destroyed by season-ending injuries and no one on offense can protect the football. Sadly, things took another unfortunate turn on Sunday.

Andy Dalton left the game after a brutal and dirty hit by Washington linebacker Jon Bostic. The injury forced Dalton out of the game and left many questioning why his teammates didn’t even defend their quarterback.

According to NFL Network’s Mike Garafolo, Dalton is doubtful for Sunday’s game and remains in the concussion protocol. As a result, Ben DiNucci will start against the Eagles. Playing behind one of the NFL’s worst offensive lines, the seventh-round pick out of James Madison won’t stand a chance in this rivalry game.

Unfortunately for fantasy owners, DiNucci starting further tanks the values of Ezekiel Elliott, Amari Cooper, CeeDee Lamb and Michael Gallup. Elliott and Cooper remain must-start players, but the rest can be left on the bench in Week 8.

After suffering an ankle injury in Week 6, the Ravens hoped Ingram might return following the Week 7 bye. Unfortunately, after missing practice in the team’s preparation for Week 8, things don’t look promising for the Pro Bowl running back.

Ingram is listed as doubtful on the NFL injury report for Week 8, fully expected to miss the game against the Pittsburgh Steelers. Set to face the last undefeated team in the NFL, Baltimore’s offense will find things even more difficult now against the Steelers.

From a fantasy perspective, it’s best to avoid Gus Edwards and J.K. Dobbins. Entering Week 8, Pittsburgh’s defense allows the second-fewest rushing yards (68.8) per game, completely neutralizing the running game. Even with one less runner in this committee backfield, there’s no reason to risk starting Edwards or Dobbins unless you are desperate.

Carolina ’s offensive weapon went down in September with a high-ankle sprain. At the time, the medical staff expected him to miss at least three games and the timetable for a recovery extended up to six weeks.

While the All-Pro running back returned to practice this week, the Panthers will ultimately play it safe by resting him one more game.

Since McCaffrey’s injury, Mike Davis has gone from a fantasy football handcuff into the waiver-wire addition of the season. As Carolina ’s starting running back, he racked up 283 rushing yards, 159 receiving yards and four total touchdowns in five games.

Unfortunately, the joy ride came to a rough stop in Week 7. The New Orleans Saints limited Davis to 36 scrimmage yards on 12 touches and kept him out of the end zone. Now, he is on the brink of seeing his role evaporate.