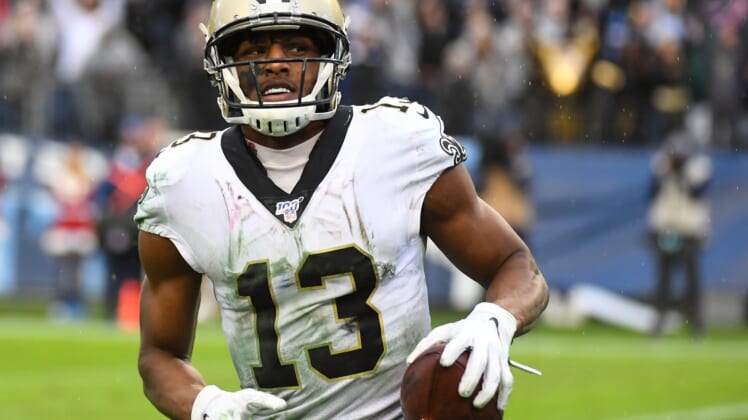 Dec 22, 2019; Nashville, Tennessee, USA; New Orleans Saints wide receiver Michael Thomas (13) breaks the record for receptions in a season with this touchdown reception during the second half against the Tennessee Titans at Nissan Stadium. Mandatory Credit: Christopher Hanewinckel-USA TODAY Sports

New Orleans Saints wide receiver Michael Thomas has been at the center of controversy this season after punching a teammate, now he finds himself mentioned in trade rumors.

Thomas, who last played in Week 1, has missed time this season due to a pair of lower-body injuries and a suspension. Now, with the trade deadline on Nov. 3 fast approaching, the All-Pro receiver may not be long for New Orleans.

According to Pro Football Talk’s Mike Florio, some around the NFL believe the Saints could be willing to trade Thomas before the deadline, or he might be looking for a way out.

The Saints certainly have reason to be a bit frustrated with Thomas this season. After suffering a high-ankle sprain in Week 1, he missed the next three games in a stretch where the team went 1-2. Then, on the verge of returning, things took an alarming return.

In the team’s final practice before Week 5, Thomas punched a teammate. While it was the final straw that led to a one-game suspension, New Orleans’ No. 1 receiver also reportedly caused problems for the coaching staff this summer and became “difficult” for the entire coaching staff, largely because he talked back to Sean Payton and the other coaches.

Between punching a teammate, arguing with coaches and accusing a staff member of snooping through his mail, the Saints had enough. After serving the one-game ban and coming out of the Week 6 bye, Thomas was expected to return for Week 7.

Instead, he’ll be sidelined for another week. He suffered a hamstring injury at some point, which kept him out of practice this week and led to the Saints ruling him out for Week 7.

New Orleans will head into Week 8 with a solid record, potentially 4-2 if they beat the Carolina Panthers on Sunday. However, there is evident frustration with Thomas and the Saints might be at the tipping point where trading him is the only move left.

There’s no denying the Saints are better offensively when Thomas is on the field. He broke the NFL’s single-season reception record in 2019 (149) and his impact is undeniable. However, the cap situation and his contract complicate matters.

Heading into 2021, when the NFL salary cap is expected to plummet, the Saints are projected to be $87 million over the cap. If New Orleans trades Thomas this season, it results in a $20 million cap charge next year. While it would lower the total cap figure for the Saints, trading Thomas still carries financial consequences in a move that would unload an All-Pro talent.

Despite the expensive contract, which makes Thomas the fifth-highest paid receiver in average salary ($19.25 million), he would generate trade interest. Even with the personality and coaching concerns, which teams also had with Antonio Brown, talent wins out in the NFL.

Teams like the Baltimore Ravens, Miami Dolphins, New England Patriots and San Francisco 49ers would all be elated to add a player like Thomas.

Related: Five NFL teams that should be buyers

Just looking at Thomas’ resume and stats show why he’d be a No. 1 receiver for any team he joined. A first-team All-Pro selection the past two years, Thomas has posted 100-plus receptions and 1,200-plus receiving yards in three consecutive years. On top of that, he’s coming off a record-breaking season.

Given the Saints are taking a win-now approach, in what will likely be Drew Brees’s final season, trading Thomas is unlikely. While there are some wild rumors at this time of the year, this one has some merit. If the right offer comes along by the trade deadline, though, it wouldn’t be a shock to see a blockbuster move.