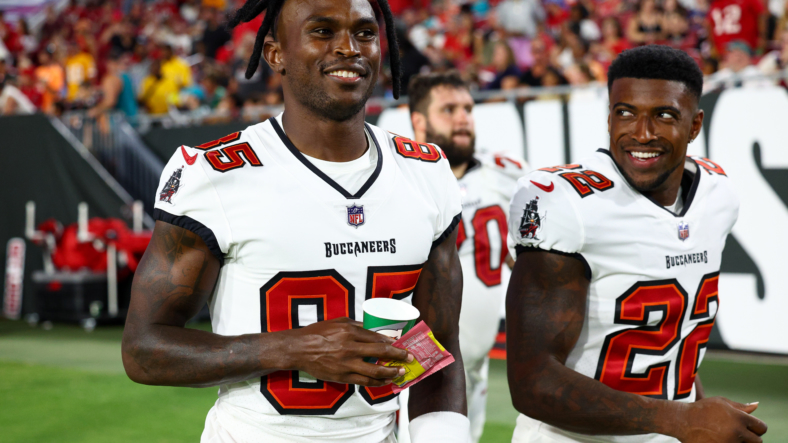 Tom Brady and his Tampa Bay Buccaneers head to Big D to take on the Dallas Cowboys in the first “Sunday Night Football” game of the 2022 NFL season.

There’s a ton of storylines to follow leading up to this game, including the Cowboys’ left tackle situation with Tyron Smith sidelined to injury. Dallas also has some issues at wide receiver due to other injuries.

As for the Buccaneers, Brady returns for his 23rd season in the NFL and his third stint in Tampa Bay. The seven-time Super Bowl winner had retired for a brief time during the offseason. But he now leads a championship contender heading into this Week 1 matchup.

Here, we check in on five players you should watch during this opening “Sunday Night Football” matchup in Texas.

Tyler Smith must step up for the Dallas Cowboys

Dallas signed nine-time Pro Bowler Jason Peters early last week after Tyron Smith suffered a torn hamstring during training camp. However, it’s unreasonable to believe that Peters will be able to play in this one. Peters just recently noted that he’ll need a “couple of weeks” to get ramped up.

That puts the onus on this first-round pick to step up and play at a high level in a less-than-ideal situation.

Dallas will likely help Smith with double teams come Sunday night. However, that could limit what offensive coordinator Kellen Moore is able to call. Meanwhile, Dak Prescott must stay upright here after dealing with an ankle issue heading into the game.

Julio Jones as an X-factor for the Tampa Bay Buccaneers

Signed by Tampa Bay in late July, this seven-time Pro Bowler has fallen on hard times recently. With that said, Jones seems to be impressing the Buccaneers early in his stint with the organization.

“He’s been more than I expected to be honest. First of all, unbelievable kid. I say kid but he’s a man,” Tampa Bay Buccaneers general manager Jason Licht on Julio Jones.

From 2014-19, Jones was among the most-productive receivers in the NFL. That span saw him average 104 receptions for 1,564 yards per season. Since then, it’s been downhill due to a combination of Jones’ advanced age and injuries. With Chris Godwin and Mike Evans doing their thing, a turn-back-the-clock performance for Jones could loom large in Tampa.

Dallas Cowboys hope to get production from KaVontae Turpin

This reigning USFL MVP made a major impact during the preseason, earning Dallas’ starting return duties. That included scoring two special teams touchdowns in a game against the Los Angeles Chargers.

But with both Michael Gallup and James Washington sidelined to injury in this one, Turpin might be asked to step up on offense. There’s not much behind CeeDee Lamb on the depth chart right now. Whether it’s getting Turpin the ball on jet sweeps or quick screens, he could make an impact come Sunday night in Big D.

Related: Find out where the Dallas Cowboys and Tampa Bay Buccaneers defenses rank

A Pro Bowler as a sophomore last season, Winfield Jr. headlines what should be a good Buccaneers secondary in 2022. The former second-round pick from Minnesota has recorded three interceptions and four forced fumbles in 29 career games.

With that said, Winfield Jr. has also struggled to an extent in coverage. That included yielding a 73.3 completion mark last season and a 147.2 QB rating when targeted as a rookie in 2020. He needs to be more consistent in coverage.

This could come up big time against the Dallas Cowboys Sunday night. That’s especially true with running backs Ezekiel Elliott and Tony Pollard likely to play roles in Dallas’ passing game. If Winfield Jr. is able to perform better in this regard and create a takeaway, it will be huge for Tampa Bay.

Ezekiel Elliott is still RB1 in Dallas. But with his future firmly up in the air, Pollard will be relied on more this coming season. In fact, there’s an expectation that he’ll see double-digit touches each week.

As a third-year player in 2021, Pollard recorded 1,056 total yards and averaged 6.2 yards per touch. He also caught 39-of-46 targets, proving himself to be an elite pass-catching back. Given Dallas’ issues at wide receiver, we expect him to play a huge role in the passing game Sunday night.