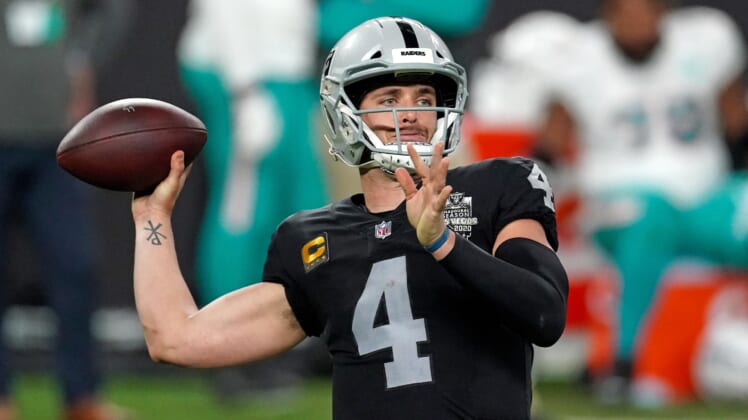 It’s highly unlikely a Derek Carr trade from the Las Vegas Raiders will happen this offseason. Immediately following a pretty solid 2020 season for the three-time Pro Bowl quarterback, reports surfaced that the Raiders would retain him.

That was followed by another report indicating that Las Vegas could potentially move Carr in an attempt to acquire disgruntled Houston Texans quarterback Deshaun Watson. That has since been rebuffed with indications that Marcus Mariota is the Raiders’ quarterback who is on the block.

Apparently, this has not stopped teams from engaging the Raiders in Derek Carr trade talks.

“Teams have called and have offered and have all been told no,” David Carr told NFL Network on Wednesday. At this point, it seems Carr could net the Raiders a decent return. Some reports indicate that it could be as much as a first-round pick.

The issue here for Las Vegas is the ability to upgrade from Carr should the team move on from him after seven up-and-down seasons. The 2019 version of Jimmy Garoppolo might be an upgrade. But he regressed during an injury-plagued 2020 campaign.

This past season saw Philadelphia Eagles quarterback Carson Wentz lead the league with 15 interceptions despite being benched for the final four games. That version of Wentz is not an upgrade over Carr.

Could the Las Vegas Raiders still pull off a Derek Carr trade?

The simple answer to this question would be a resounding yes. But with one caveat. If the Raiders are able to pull off a blockbuster Deshaun Watson trade, they would more than willing to give up Carr.

The trade of their incumbent starter would also enable the Raiders to add the necessary draft pick assets for Watson without completely mortgaging their future.

As of right now, the baseline return in a Watson trade is said to be three first-round picks and at least a couple young players. It would be among the heftiest returns in a trade in modern NFL history.

As for Carr, he was pretty darn good in 2020. The 29-year-old signal caller completed 67.3% of his passes for 4,103 yards with 27 touchdowns against just nine interceptions. He’s also set to count a modest $22.13 million against the cap in 2021, a huge asset for teams given the NFL salary cap situation stemming from the revenue downturn COVID-19 has created.