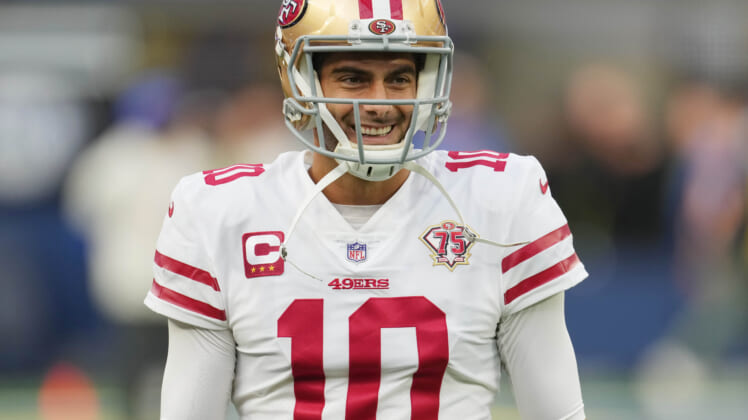 The San Francisco 49ers held out on making a Jimmy Garoppolo trade until after Deshaun Watson landed with his new team. Now that the domino has fallen, NFL teams interested in Garoppolo will need to pay a significant price to land him.

Many assumed San Francisco would try and deal Garoppolo before it needed to be under the NFL salary cap. Trading the veteran signal-caller would create $25.5 million in cap space, allowing the franchise to spend more in free agency. Instead, the 49ers restructured contracts to get under the cap.

Once that issue was addressed, San Francisco had no reason to rush into a trade. Garoppolo wasn’t the best quarterback being floated in NFL trade rumors, meaning other clubs focused on Watson. Now that the three-time Pro Bowl quarterback is with the Cleveland Browns, Garoppolo is at the front of the line to be moved.

According to NFL insider Albert Breer, the 49ers have engaged in talks with the Carolina Panthers and New Orleans Saints regarding Garoppolo. Based on conversations with league executives, Breer believes the desired asking price for a trade is two second-round picks. 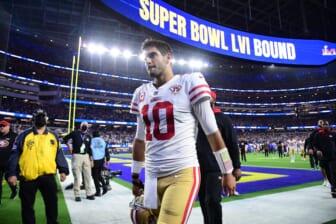 Also Read:
How a Jimmy Garoppolo trade to the New Orleans Saints might look

The Washington Commanders likely did the 49ers a favor with the Carson Wentz trade. Despite Wentz having a worse contract and red flags about his coachability, Indianapolis still received a pair of third-round picks and moved up in Round 2 of the 2022 NFL Draft.

New Orleans would likely have a better shot over Carolina. The Saints hold their 2022 second-round pick, two third-round picks and a 2023 second-round pick. As for the Panthers, trades for Sam Darnold and C.J. Henderson last season leave them without a Day 2 pick this year.

San Francisco will likely resume trade negotiations this week, but it might want to work quickly as one of the teams pursuing Garoppolo could view Baker Mayfield as a better option.