The Indianapolis Colts can't bank on Philip Rivers being their quarterback beyond this year. Let's take a look at immediate upgrades for Indy in 2021. 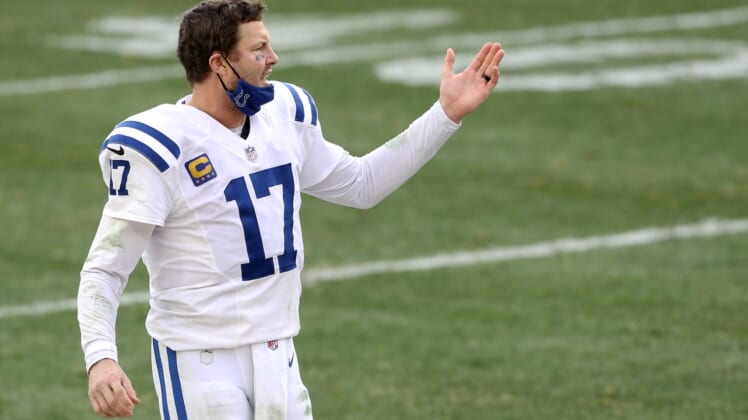 The Indianapolis Colts made the playoffs thanks in part to quarterback Philip Rivers experiencing a resurgence under head coach and play-caller Frank Reich.

However, Rivers officially announced his retirement on Wednesday, as his mobility and physical skills were good enough to get through 2020, but probably not far beyond that. This means the Colts, who have plenty of cap space and a talented roster heading into this coming offseason, should be in the market to upgrade under center, especially without Rivers in the picture.

Given how well the 39-year-old Rivers played this past season, with 4,169 passing yards, 24 touchdowns, 11 interceptions and a 97.0 passer rating, Indianapolis fans have to be excited about the prospect of adding a more dynamic talent to the position.

“They’ve been pretty methodical and waiting for the right time to strike. This could be the time [at quarterback],” said an AFC executive regarding the Colts, per ESPN.com’s Jeremy Fowler.

Check out our list of the five best options Indianapolis could go with to replace Rivers for 2021 and beyond.

If the Dallas Cowboys still refuse to give Prescott a long-term contract after witnessing how bad the team has been without him for much of 2020, the Colts have all the means to offer him the massive payday he’s been searching for.

Because of the salary cap lowering so much this coming league year, many of the suitors that might make sense for Prescott will be too strapped for cash to offer him proper market value. Dallas will have just under $24 million in cap room, so it’d take some serious maneuvering to get Prescott’s deal done as is.

Washington and New England have enough space for Prescott, but not as much as the Colts. Would Prescott want to go to the Cowboys’ NFC East rival and stick it to them twice a year? Given the caliber of the Football Team’s organization, it doesn’t sound very appealing just for vengeance’s sake.

As for the Patriots, Bill Belichick is reticent to spend boatloads of money in free agency. He got accustomed to Tom Brady taking pay cuts throughout his career, and is suddenly without a cost-effective answer at quarterback. That could mean New England trades up for a new QB on draft day.

So, who’s left for Prescott? The Colts. They have the protection up front Prescott thrived with as a rookie in Dallas, and his athleticism and rushing ability would unlock new dimensions to Reich’s system.

Dubious decision-making, turnovers and poor coaching from Adam Gase have all contributed to Darnold’s growth being stilted since he took over the New York Jets’ offense in 2018. To date, the USC product hasn’t shown the ability to transcend the Jets’ collective woes and produce a winning offense.

Indianapolis has among the best support systems for a quarterback in the NFL. A viable running game, and a solid defense, especially if coordinator Matt Eberflus doesn’t bail for a head coaching job and returns, which looks increasingly like it’ll be the case.

One notable upgrade Darnold would benefit from with the Colts is on the offensive line, Despite the 23-year-old’s ability to escape the pocket and make plays off-schedule, the Jets still rank 28th in adjusted sack rate at 7.8% in 2020. Meanwhile, the Colts are eighth-best at 5.3% even with the statuesque Rivers dropping back, per Football Outsiders.

These are all luxuries Darnold isn’t accustomed to in New York. Since the Jets have the second overall pick in the upcoming draft, too, they’ll probably move on to someone else at the position with superior talent and upside, such as BYU’s Zach Wilson.

On the other hand, the whole Deshaun Watson trade possibility is throwing a wrench in everything. If Houston winds up dealing with New York, it’s most likely the Texans are going to want Darnold as part of the deal. Then, there’s the buzz coming out of the Jets organization that they may keep Darnold at least for 2021.

While an appealing option, there’s a multitude of reasons Darnold is a little further down on this list to be the Colts’ QB of the future.

If anyone’s in need of a serious career revival, it’s Wentz. Upon being benched by the Philadelphia Eagles, he witnessed Jalen Hurts provide a spark, as teammates rallied around him. Then, there’s the rumor Wentz ignored coaching from the eventually-fired Doug Pederson, who’s so disenchanted with how things ended with the Eagles that he’s apparently stepping away from coaching next season.

Let’s be honest: Philadelphia didn’t have many weapons to speak of in its receiving corps, and the offensive line was decimated. The Eagles asked Wentz to play hero ball all year, and that, combined with the drafting of Hurts in the second round, did Wentz no favors.

Now you may say: big deal, Carson. Grow up. Philadelphia paid you massive money to overcome anything and be a Super Bowl winner.

It’s not that simple. Very few quarterbacks can succeed and play winning football regardless of the circumstances. Their names are Patrick Mahomes, Russell Wilson and Aaron Rodgers.

Just look at Watson. For all his brilliance in 2020 — an NFL-leading 4,823 passing yards, 70.2% completion rate, 112.4 passer rating (second only to Rodgers) — the Texans were among the NFL’s worst teams, resulting in the superstar QB trying to fight his way out of the organization.

Reich actually was the Eagles’ offensive coordinator during Wentz’s first two seasons, helping the young signal-caller become an MVP candidate in 2017. A reunion with Reich would probably do wonders for Wentz and potentially give the Colts a top-tier quarterback to build around.

Given the dire situation in Philly, Wentz may even rework his exorbitant contract to accommodate a Reich reunion.

If the Atlanta Falcons can pull off a trade for Matt Ryan on or after June 1, 2021, they’ll save a net of $23 million against next year’s cap. That’s a big deal, considering Atlanta is currently projected to be more than $26 million over the league limit as of now.

Everything happening with the Falcons right now is very reminiscent of the situation with Stafford in Detroit, except even more severe. Ryan, 35, is at the tail end of his prime in all likelihood. Atlanta, too, is in the process of finding its new coaching staff under Arthur Smith, who seems intent on keeping Ryan. However, the team is also going to have the No. 4 overall pick in the 2021 NFL Draft, with a new, more dynamic and cheaper QB within reach.

All the circumstances suggest Ryan should ultimately be on the way out at some point. There are few better landing spots than Indianapolis. Everyone wins.

In this scenario, the Falcons aren’t sending their beloved Matty Ice to a bad franchise. Ryan gets the chance to compete at least for a division title in the AFC South, with a sturdy offensive line, dynamic rushing attack led by Jonathan Taylor, and a solid defense. Then, Atlanta can sell its fans on a new era with Ryan’s long-term successor.

New Orleans Saints head coach Sean Payton seems infatuated with Taysom Hill as the long-term successor to Drew Brees, which means Winston is probably going to be searching for another team to play for this offseason.

Given the horrendous cap situation the Saints are in, it’d make sense for Winston to look elsewhere to compete for a starting job while also earning lots more money than he likely could in New Orleans.

Winston has had an erratic NFL career since being a No. 1 overall pick. During the 2019 campaign, although he did throw 30 interceptions, he also passed for over 5,000 yards, which shows the type of high-end ability Winston has if he can just eliminate the silly mistakes.

With a strong rushing attack supporting him in Indianapolis and Reich fostering his continued development, there’s a chance Winston could experience a career renaissance with the Colts. He’d probably be among the best bargains Indy could get given his experience, production and relative cost compared to other high-priced veterans.