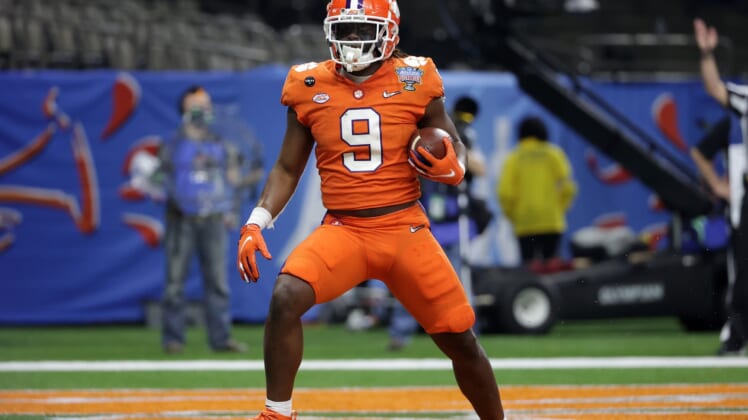 We’re highly intrigued to see what the Atlanta Falcons draft picks in 2021 look like under new general manager Terry Fontenot. It seems like Atlanta is still looking to keep its core group, Matt Ryan included.

If so, the 2021 NFL Draft will have to be a smashing success for both Fontenot and new head coach Arthur Smith following a four win season in Atlanta.

As of right now, the Falcons are projected to pick fourth overall in the draft. However, that could change by the team trading down with another quarterback-needy franchise.

Atlanta needs more help on defense than offense right now. That will likely be the focus in trade-down scenarios for the team. Without further ado, let’s look at the Atlanta Falcons draft picks and what they should do come April.

At this point, it seems more likely than not that new Falcons general manager Terry Fontenot will trade down from four with a quarterback-needy team rather than select an eventual heir-apparent to Matt Ryan. Even if Atlanta were to stay at four, there’s a better chance that the team goes defense.

That’s where both Farley and Parsons come into play. It really all depends what position the Falcons think they need more help. The 6-foot-2 Farley is considered the consensus No. 1 corner in the draft with true shutdown ability. Atlanta has not had that since Desmond Trufant was in his prime. It’s definitely a need for a Falcons defense that yielded a 101.7 passer rating a season ago.

On the other hand, Parsons was considered the top overall defender in the 2021 NFL Draft prior to opting out of his final season with Penn State. He, too, fits a need a linebacker for a Falcons defense that needs all the talent it can get. Even then, look for a trade down from this spot.

If Atlanta were to pass on Farley in the first round, Samuel Jr. would not be a bad backup option. He comes from pedigree (father was a Pro Bowl CB in the NFL) and showed out big time during a three-year career with Florida State. Quarterbacks largely avoided the corner with the Seminoles last season due to his shutdown ability, but Samuel Jr. was still able to record three interceptions.

Remaining on defense, the Falcons recorded only 29 sacks a season ago. Their best sack man from the edge position, Steven Means, had a mere three. The 6-foot-3, 247-pound Perkins was a consistent figure with Oklahoma, recording at least five sacks in each of his three seasons and tallying 32 tackles for loss during that span. Moehrig also becomes an option as a single-high safety for a Falcons team that needs help in that regard.

With that said, I am most inclined to believe that the Falcons will look running back in Round 2 for new head coach Arthur Smith. We saw how much success Derrick Henry had in that role under Smith in Tennessee. Etienne was considered the consensus top running back ahead of the 2020 college football season. He’s since been passed up by Najee Harris.

Even then, here’s a dude that recorded 6,107 total yards and 78 touchdowns at a clip of nearly eight yards per touch during his four-year career with Clemson. The dude is a legit franchise back. Atlanta needs that after the failed Todd Gurley experiment of a season ago.

Even if the Falcons retain Matt Ryan (as expected), there’s no reason for the team to avoid a mid-round quarterback in the coming draft. The mock draft simulator from Pro Football Network utilized in this article had Trask available in Round 3 for Atlanta. If so, it’s pretty much almost a no-brainer.

The 6-foot-5 Trask was absolutely brilliant for Florida last season, throwing for 4,283 yards with 46 total touchdowns against eight interceptions. While he’s seen as a project, sitting behind Ryan for a couple years will help the talented quarterback.

If the Falcons want to go with immediate-impact players to help preserve the twilight of Ryan’s career, Clemson wide receiver Amari Rodgers makes sense. He’d be a perfect slot option to go with Julio Jones and Calvin Ridley. Boasting game-breaking ability, the 5-foot-10 Rodgers caught 77 passes for 1,020 yards and seven touchdowns this past season.

There’s a lot to look at here. First off, Atlanta will be in a great position with one of the top-three quarterbacks on the board at No. 4 overall. Whether it’s Zach Wilson (BYU) or Justin Fields (Ohio State), quarterback-needy teams will pay a premium to move up with the Falcons.

In lieu of Atlanta going quarterback, I am predicting that the team trades down four spots with Carolina — adding a valuable second-round pick in 2021 and first-round selection in 2022.

After being able to land the consensus No. 1 corner in the draft, Caleb Farley, the Falcons are able to pick up stud EDGE rusher Jaelan Phillips in the pick acquired from Carolina. They then add the above-mentioned Travis Etienne before closing out Day 2 with a talented linebacker/safety hybrid in that of Jabril Cox. That’s four likely Day 1 starters for the Falcons.

In the fifth round, Atlanta picks up project quarterback Jamie Newman. The former Georgia signal caller has impressed big time at the Senior Bowl and could be a potential heir-apparent to Matt Ryan.