Doug Pederson hoisted the Lombardi Trophy not long ago. Now, the fired Philadelphia Eagles coach will probably watch the 2021 NFL season from afar. 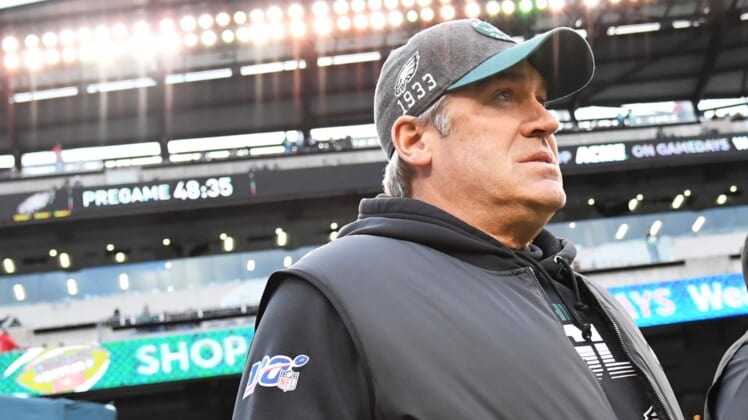 Just a few years removed from winning a Super Bowl, Doug Pederson has made it known he’s probably going to step away from coaching for the 2021 NFL season after being fired by the Philadelphia Eagles.

Pederson guided Philadelphia to three consecutive playoff berths before going 4-11-1 in 2020, leading to his dismissal.

Doug Pederson: Mulling a step back from coaching in 2021

Through a text message featured in an article penned by the Philadelphia Inquirer‘s Les Bowen, Pederson said he’s, “leaning toward taking the next year off and preparing for [the] next season.”

In that Super Bowl LII, Philly got the job done in a 41-33 win, with backup signal-caller Nick Foles leading the way. During the next two seasons, the Eagles dealt with numerous injuries in each year, yet still went to the playoffs with a 9-7 record.

Unfortunately, everything went very wrong in 2020 for Philadelphia and Pederson, as Wentz regressed worse than any top-flight NFL quarterback has in recent memory, and eventually got benched in favor of rookie second-round pick Jalen Hurts.

This probable move by Pederson is reminiscent of what happened with Mike McCarthy. The longtime Green Bay Packers coach had a falling-out of sorts with superstar quarterback Aaron Rodgers and got fired. McCarthy proceeded to take the 2019 season off, only to wind up as the successor to Jason Garrett for the Dallas Cowboys’ lead gig.

It’s conceivable that something similar could happen to Pederson. In the worst-case scenario, he could always return to the Kansas City Chiefs and become their offensive coordinator after next season. Pederson held that position on Andy Reid’s staff from 2013 through 2015.

By then, it’s most likely current Chiefs OC Eric Bieniemy will have a head coaching job. While it’d be a step back from his prior post, dialing up plays with Reid for a superstar like Patrick Mahomes isn’t the worst job to have. If Pederson were to perform well in that post — again, provided Bieniemy gets his overdue opportunity as a head coach — he’d be in prime position to get another head coaching gig.

Again, Pederson could very well pull a McCarthy maneuver and promptly return to the sidelines as an NFL head coach. It all depends on what he wants to do with his future, and in light of this latest news, Pederson will have plenty of time to think it all through. It’s probably for the best to step away following a messy Eagles divorce.