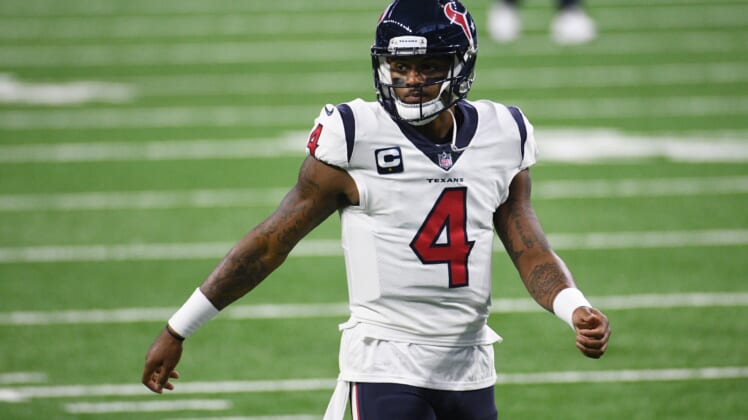 The Houston Texans will head into the 2021 NFL Draft with Deshaun Watson wanting out and the organization not having a top-60 pick entering a rebuild. Both of those things could change if new general manager Nick Caserio changes his stance after months of rejecting blockbuster trade offers.

Watson demanded a trade in January, citing alarming issues within the Texans’ front office and hierarchy. It came at a time when the organization seemingly ushered in a new era, hiring Caserio to replace Bill O’Brien as GM and David Culley as head coach. As the team prepared for a rebuild, with concerns about those making the decisions, the star quarterback wanted to play elsewhere.

Immediately upon Watson’s trade quest, the Texans pushed back. Caserio made it known that the club had zero interest in dealing the 25-year-old star and that message was sent even more strongly to inquiring teams. But the situation between Watson and the Texans is getting worse, fueling increased chatter that a trade is inevitable.

NFL insider Jim Trotter, via the Rich Eisen Show, believes trade talks around Watson will heat up around the 2021 NFL Draft. By then, with multiple teams making top picks available in a great draft class, there could start to be more movement on a potential blockbuster deal.

Both the Texans and Watson are sticking to their guns right now. The Pro Bowl quarterback told the organization he will never play for them again. Later, in a meeting with Culley, Watson told the Texans’ coach that he won’t suit up for the team again and nothing will change that. Even Watson’s friends and leaks from his camp have made it clear he is willing to take the Carson Palmer approach.

Palmer requested a trade from the Cincinnati Bengals following the 2010 season, vowing to never step foot in Paul Brown Stadium for that organization again. When his request wasn’t fulfilled, the star quarterback retired and Cincinnati drafted Andy Dalton with its second-round pick in the 2011 NFL Draft. By October, Palmer was traded to the Oakland Raiders.

Deshaun Watson trade rumors: AFC team ‘all in’ on trade for star QB

For now, the Texans are willing to let Watson sit out the 2021 NFL season. The organization can fine him for every day of training camp he skips, withhold his game salaries and come after his signing bonus. In total, the MVP-caliber quarterback could lose out on $20-plus million if he sits out the whole year.

Houston can take that approach, but the situation isn’t as easy. Thanks to O’Brien’s trades, the Texans don’t have their first- or second-round picks in the 2021 NFL Draft. In fact, barring a trade, the team won’t be put on the clock until the No. 67 overall selection. So, it’s not like the team can effectively start rebuilding this offseason.

There’s another problem at hand. The locker room is siding with Watson, encouraging him to get out of Houston and they share some of the same feelings he has about owner Cal McNair. Meanwhile, a majority of the fans are also upset by McNair’s actions and the level of power Jack Easterby has in football operations.

While trading a star who wants out might set a bad precedent for a first-time GM, even more damage could be done if a deal isn’t made. The New York Jets, Miami Dolphins and Carolina Panthers all badly want Deshaun Watson and can offer the kind of franchise-changing return of picks and young players to help start the Texans’ rebuild.

If the organization decides to wait and drags this past the NFL Draft, though, matters will only get worse. But, given all the moves we’ve seen from this team in recent years under Easterby, the worst decision is the likeliest to happen.