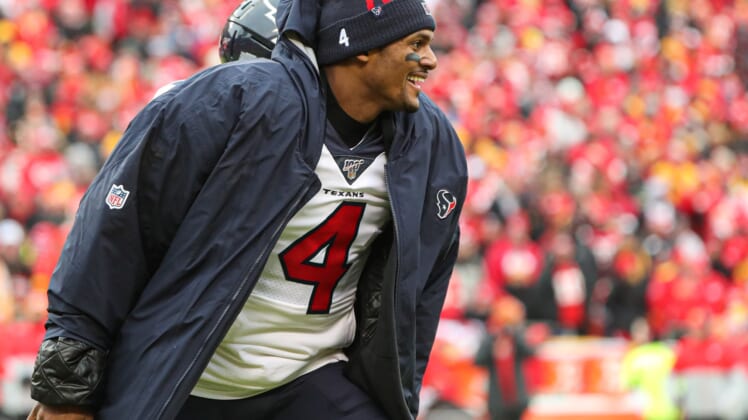 The Houston Texans are adamant they won’t trade Deshaun Watson and the star quarterback is just as determined to never play for the organization again. As the drama between the two sides unfolds this offseason, Watson’s future in Houston remains uncertain.

Things between the 25-year-old quarterback and the organization went south quickly this offseason. After firing Bill O’Brien, team owner Cal McNair reportedly promised Watson that he would receive some input in the hiring process for a coach and general manager. Instead, McNair and interim GM Jack Easterby ignored the recommendation of the search firm hired and took a private flight to hire Nick Caserio for the role.

A distrust with the organization that existed after the ridiculed DeAndre Hopkins trade, which Easterby played a major role in, got worse. Watson was angered by McNair’s decisions and had zero confidence that a team operated under McNair’s direction, with Easterby operating behind the scenes, could lead to a successful football team.

The Pro Bowl quarterback demanded a trade, leading to weeks of rumors and speculation. Now, we have a new update that could hint at a slight change in the organization’s approach.

NFL.com’s Jim Trotter interviewed head coach David Culley and asked if Watson would be the Texans’ starting quarterback in Week 1. After hearing Houston’s coach say the 25-year-old is their starter right now, Trotter now believes that Watson will be traded.

While it is only a belief, Trotter is one of the top reports in the NFL and has covered the league for years. As he explained on NFL Network, the use of qualifiers by Culley leads to the belief that the Texans aren’t ruling out a blockbuster trade. In recent memory, namely with Jared Goff, there are examples of teams stating their quarterback is the starter right now and later trading him that offseason.

Ever since Watson asked for a trade, Houston made it clear to anyone who would listen that a move isn’t happening. In his introductory press conference, Caserio expressed zero interest in moving the MVP-caliber talent. When Culley took the job and spoke with reports, he said he accepted the position with the belief that Watson was the franchise’s guy for years to come.

It’s not just publicly that the team is sending this message. Rival clubs have kept calling, only for Caserio to ignore the inquiries completely. General managers have been forced to leave their trade offers via voicemail, with the situation making Watson even more frustrated.

Houston still believes it can salvage this relationship, but that’s likely a lost cause. Recent moves have created an even bigger distrust with Watson and even the locker room is turning on the organization. Watson is willing to forfeit millions of dollars and seems ready to sit out one of the prime years in his NFL career. He also told Culley directly that he won’t suit up for the Texans again.

It’s a safe bet at this point that the saga will play out past the 2021 NFL Draft, when the Texans could likely receive the greatest return in a trade. With this dragging into the summer, Deshaun Watson likely won’t be at training camp and the real drama will begin.

Ultimately, one side will need to give in. Based on how far the 25-year-old quarterback has taken things, all by a player who is typically reserved and happy, a blockbuster trade feels inevitable.