Chicago Bears reportedly offering the most for Deshaun Watson trade 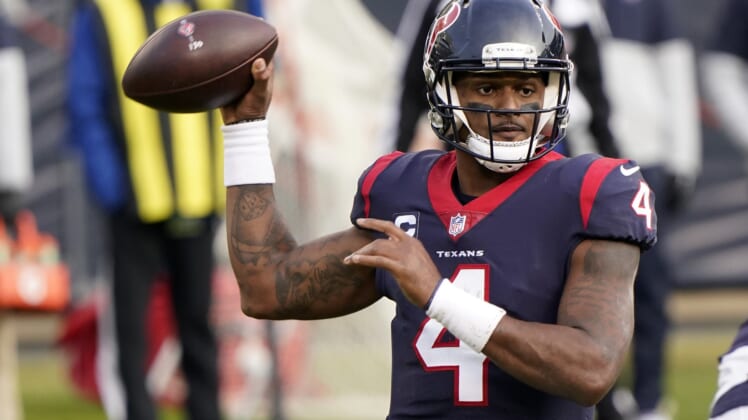 The Chicago Bears chose Mitchell Trubisky over Deshaun Watson in the 2017 NFL Draft. As the organization prepares to move on from its former No. 2 overall pick, the front office seems to have its sights set on correcting its decision this offseason.

Poor quarterback play is the thing that has kept the Bears from being Super Bowl contenders in the past three seasons. Chicago’s fateful decision to trade up for Trubisky, passing on Watson and Patrick Mahomes, is still harming the team to this day. Fortunately, thanks to the Houston Texans’ dysfunction, the Bears might have a chance to acquire the MVP-caliber talent they passed on a few years ago.

Here is the latest on the Chicago Bears pursuit of Deshaun Watson.

Watson desperately wants out of Houston. After years of former head coach/general manager Bill O’Brien making baffling decisions and executive Jack Easterby taking over control of the building, the 25-year-old has lost complete trust in the organization. Now, coming off a phenomenal season, he wants out and is willing to play anywhere else.

For weeks, the Texans have publicly stated and privately told other teams that their superstar quarterback won’t be moved this offseason. While Houston believes it can salvage the relationship, recent moves have made the situation even more toxic and Watson stood by his trade demand after a meeting with head coach David Culley. Now, he is seemingly prepared to sit out a majority of the 2021 season despite it costing him millions of dollars.

While the Texans have refused to even engage in exploratory dialogue, sending teams to voicemail, it hasn’t stopped general managers from making offers. In fact, there might already be a leader in the clubhouse if Houston ever relents.

ESPN’s Jeff Darlington shared on Get Up, that it will be extremely difficult for Houston to find a team willing to give up as much as the Bears are willing to move for Watson right now.

While specifics aren’t provided, it’s not difficult to imagine the kind of framework we’d be looking at for a potential blockbuster. For Houston to even consider a trade, a team must be willing to send at least three first-round picks and some young talent. The Miami Dolphins (No. 3 overall, No.18 overall) and New York Jets (No. 2 pick, No. 23 selection) each have more valuable picks in the 2021 NFL Draft than Chicago.

So, the Bears will need to get very creative. If they have the best offer on the table, it almost has to include first- and second-round picks from the 2021, 2022 and 2023 NFL Drafts. Furthermore, since those future picks will be later and Chicago owns the No. 20 selection this year, it would likely need to include a player like cornerback Jaylon Johnson.

That might be just a starting point and it’s a massive price for the Chicago Bears to pay. However, general manager Ryan Pace and head coach Matt Nagy are operating with their jobs on the line. If things don’t go well in 2021, both men will be fired the moment the year ends. In that position, with everything to lose, one team’s desperation could be what convinces the Texans to move Watson. If that happens, the Bears could be Super Bowl contenders next season.