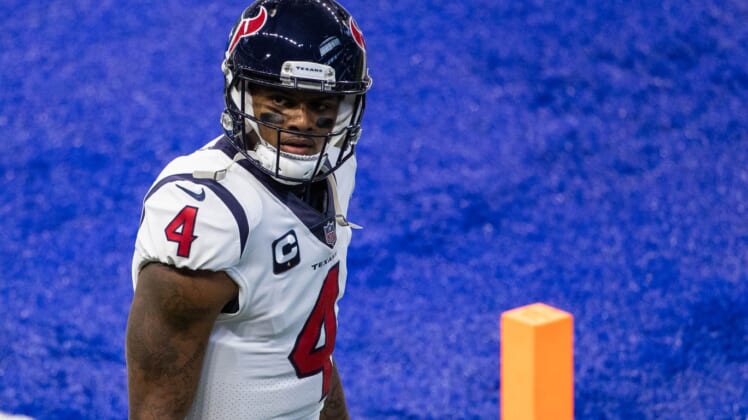 NFL rumors continue pointing in the direction of the upstart Miami Dolphins being interested in a Deshaun Watson trade. Despite boasting a solid young quarterback in Tua Tagovailoa, the idea of adding a franchise quarterback who has yet to hit his prime has to be appealing to the powers that be in South Beach.

The better news for long-downtrodden Dolphins fans is that fact that they have a ton of assets to offer up the Houston Texans in a potential Deshaun Watson trade. That includes the No. 3 overall pick in the 2021 NFL Draft (originally from Houston) and Tagovailoa as centerpieces.

We now have some more information on this. It’s not necessarily too surprising. But it does give us an idea of what general manager Chris Grier and Co. are thinking behind the scenes.

Miami Dolphins ‘all in’ on potential Deshaun Watson trade

“I do think that Miami is going to go all-in on trying to get Deshaun Watson. I do,” NBC Sports’ Chris Simms noted. “I got that sense from people I trust around the league. So I don’t look at them as drafting a quarterback.”

Simms is pretty much in the know when it comes to happenings around the NFL world. He’s not just making this declaration without some concrete information behind the scenes.

At issue here is the Texans’ unwillingness to even discuss a potential trade with other teams after Watson requested to be moved earlier in the offseason. New general manager Nick Caserio is attempting to patch things up. Given what we’ve heard from Watson’s camp and his continued lack of relationship with the Texans’ brass, that seems highly unlikely.

Recent reports suggest that a Deshaun Watson trade could happen quickly ahead of the 2021 NFL Draft. That is to say, a deal being finalized before reports break from those big-name individuals within the NFL media world.

Watson, 25 is coming off a banner year for an otherwise bad Texans team. He threw for a league-high 4,823 yards with 33 touchdowns against seven interceptions.

Despite signing a four-year, $156 million extension back in September, any team acquiring Watson would be looking at a mere $10.54 million cap hit in 2021. With the NFL salary cap having decreased this year, that has to be enticing to interested teams.

How might a Deshaun Watson trade to the Miami Dolphins look?

Obviously, it would start with the third pick in April’s NFL Draft. That was originally acquired by Miami from Houston in the Laremy Tunsil blockbuster back in August of 2019. From there, Houston would demand 2020 No. 5 overall pick Tua Tagovailoa to take over under center for Watson.

In no way would that be the extent of it. If the Texans were to actually deal Watson, they’d be looking at one of the biggest trade packages in modern NFL history. Some comparisons have been drawn to the now-infamous deal that sent Herschel Walker from the Dallas Cowboys to the Minnesota Vikings back in 1989.

Miami might actually have to throw in another pick or two. But with two first-round selections, Tagovailoa and reigning NFL Defensive Player of the Year candidate Xavien Howard as the centerpieces, this deal could get done.

As noted above, the Texans are not currently accepting offers for Watson. That will likely change the closer we get to the 2021 NFL Draft on April 29.

The Chicago Bears seem to be more focused on acquiring Russell Wilson in a blockbuster trade. Meanwhile, rumors of the New York Jets potentially landing Watson have died down some.

Out west, there’s been some suggestions that the San Francisco 49ers have already prepared an offer for the Texans’ star quarterback.

Whether something gets done here soon remains to be seen. But it appears that the Dolphins want to land Deshaun Watson. With the capital to make it works, South Beach could be his next home.