The Carolina Panthers starting quarterback in 2022 remains undetermined and with question marks surrounding the NFL Draft class, a trade for San Francisco 49ers signal-caller Jimmy Garoppolo could still be an option.

Carolina attempted to acquire Matthew Stafford in 2021 only to have him nix a deal. The franchise then turned its attention to Deshaun Watson dedicating a year-plus towards being in a position to land the NFL star. Ultimately, the Panthers didn’t even finish as a finalist for him.

The franchise is now in a difficult spot. With the No. 6 pick in the 2022 NFL Draft, they will have their choice from the best quarterback prospects. Unfortunately, the league-wide evaluation on the 2022 crop is none of these passers are worth a top-10 pick.

For now, Carolina is exploring trade-down scenarios, the best-case scenario for a franchise that needs Day 2 picks and wants to pick a quarterback later in the first round. However, the front office is reportedly also still keeping its eye on Garoppolo. 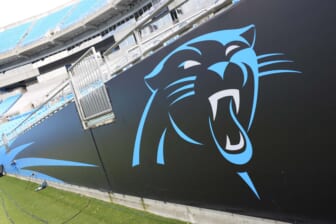 Appearing on ESPN’s SportsCenter on Sunday, NFL insider Jeremy Fowler reported that the Panthers “have done their homework” on Garoppolo. Like other NFL teams, though, they want to gather more information about his recovery from offseason shoulder surgery.

When will Jimmy Garoppolo be traded?

As Fowler mentioned, teams are very hesitant to make a move on Garoppolo following shoulder surgery. While he is expected to be cleared for training camp, clubs have no way of knowing how he will look once he recovers and the risk of a setback always exists.

Money is also an issue. While Garoppolo is far down the list of the highest paid NFL players, a $26.95 million cap hit is a massive commitment for an average starter. For any deal to happen this summer, the 49ers likely need to eat a significant portion of Garoppolo’s salary.

With all that said, he deserves to be on Carolina’s radar. Garoppolo is better than Sam Darnold and knows how to make accurate throws to playmakers around him. With the 49ers also not wanting to trade him to the Seattle Seahawks, the Panthers hold plenty of leverage in this situation.