Signing Sammy Watkins is a step in the right direction for the Baltimore Ravens' offense, but they need to do more if they want a real shot at a Super Bowl. 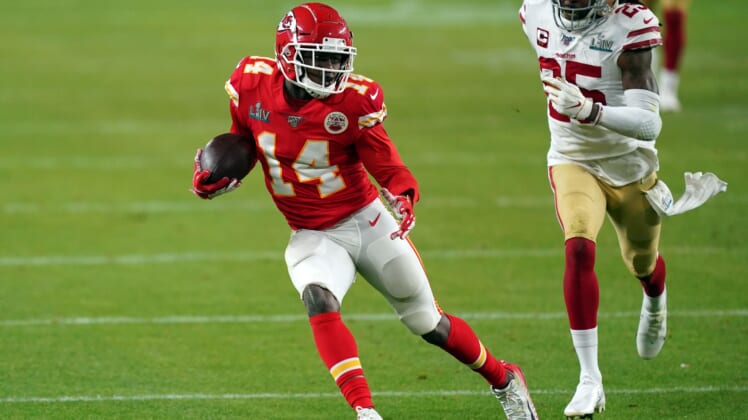 Whisking someone away from the two-time reigning AFC champion Kansas City Chiefs is a great move by Baltimore, who was starved of receiver talent. Gifted as Watkins is, though, there are still more transactions the Ravens should make to bolster Lamar Jackson’s stats in 2021.

Watkins is a former high first-round pick whose career was derailed by injuries early on. While he has played well in three seasons with Kansas City, the 27-year-old veteran has been banged up, missing 14 total regular-season games, which is obviously almost an entire year’s worth.

One positive way to view Watkins’ situation with the Chiefs is that he was vying for targets from two world-class players in supreme speedster Tyreek Hill and legendary tight end Travis Kelce. In each of the past three seasons, when Watkins was in action, he averaged the third-most receiving yards per game while he caught passes from Patrick Mahomes.

So, with Baltimore counting on Watkins at this point as its No. 1 receiver, it stands to reason he can get it done as the go-to guy for Jackson. Nothing he did with the Chiefs suggests otherwise, as his opportunities were limited due to the extraordinary skill players around him.

The big knock on Watkins remains, however. He must stay healthy to be that guy for the Ravens, and barring a reversal of course from the rest of his time in the NFL, that won’t happen. Thus, Baltimore must be proactive in finding other ways to help Jackson make that next leap as a passer and elite quarterback.

2 more moves for Ravens to make after signing Sammy Watkins

It’s no secret that Allen Robinson doesn’t love his situation in the Windy City. And why would he, honestly? The Bears franchise tagged him in the hopes of eventually working out a long-term contract.

Maybe if they’d traded for Russell Wilson, that would’ve convinced Robinson to stay for the long haul. Instead, nope. Andy Dalton is the Bears’ QB1.

After catching passes from Blake Bortles, Mitchell Trubisky and a washed-up Nick Foles, you’d think Robinson would be in the market to upgrade by any means possible. Jackson has never had a receiver anywhere close to as good as Robinson, and is an NFL MVP. You can bet Robinson would sign up for that in a heartbeat.

Chicago could badly use some future draft assets, whereas the Ravens should be all-in on winning now while Jackson has probably one more year at most before he inks a massive contract extension. Giving him the assurance that he’ll have a No. 1 target like Robinson beyond just the 2021 campaign is one way to build Jackson up and help him lift Baltimore to a Super Bowl title.

With the NFL salary cap expected to soar in 2022 and Jackson and Robinson mutually grateful to have each other, you can bet they’ll work out their multi-year contracts however they need to as a means of making sure they’re together for more than one season.

The Ravens’ right tackle has made it abundantly clear he wants to play on the left side, which won’t happen with the Ravens due to the presence of Ronnie Stanley.

Brown isn’t easily replaced on the opposite edge, so Baltimore really needs to get a solution in place, get what it can for Brown in a trade and move on before there’s a gaping hole at a vital position.

Now, this move may not come for a while yet. The 2021 NFL Draft is still about a month away, and perhaps Brown will find a new team in a draft night deal. Just saying: That’s not the most predictable or viable strategy for the Ravens to deploy to ensure Jackson is optimally protected for this upcoming year.

Baltimore isn’t picking until 27th in the draft’s first round, so a trade up may be necessary to land a player worthy of taking Brown’s place. One prospect who jumps to mind is Oklahoma State’s Teven Jenkins.

Another possibility is trying to get Watkins to recruit one of his former Chiefs teammates Mitchell Schwartz. He’s one of the best right tackles in the game and was released by Kansas City. Schwartz is reportedly mulling retirement, but he’d be an ideal acquisition if he can be convinced to suit up in 2021.