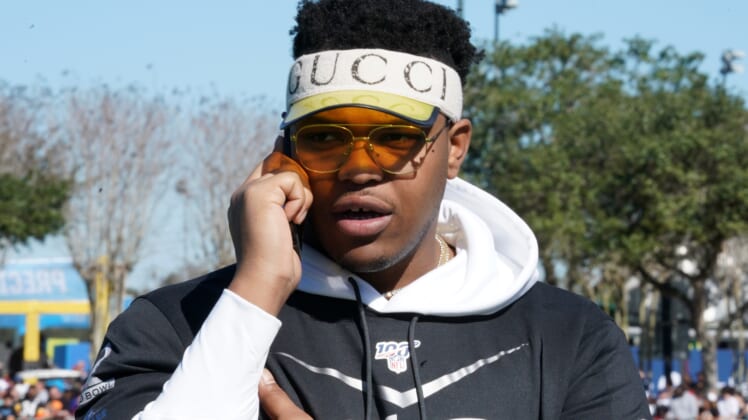 Despite being drafted to the same team as his dad, Orlando “Zeus” Brown, reports have surfaced that Orlando Brown Jr. now wants an opportunity to play elsewhere. The reasoning given is that Brown Jr. wants to play on the left side of the line, where the Baltimore Ravens already have their franchise left tackle in Ronnie Stanley.

The Ravens have taken it a step further, granting Brown and his agent permission to search for a new team via trade. Because of this, it stands to reason that the former third-round pick in the 2018 NFL Draft is available, for the right price. Now, rumors are circulating of what price teams may have to pay to acquire the talented offensive lineman. Discover which teams may be in prime position to add Brown Jr. to their line.

Part of the problem from the perspective of the Ravens is that Orlando Brown Jr. is under contract but is entering the final year of his rookie deal. With that, after the 2021 NFL season, Brown will likely hit the open market and command a pretty penny.

The current alternative for the Ravens is to attempt to hold onto him for this year, go all-in on trying to win Super Bowl LVI, and either hope he may reconsider wanting to leave by trying to re-sign him, or collect the expected third-round compensatory pick given to the team for losing valuable free agents.

However, a trade would obviously be more ideal for all parties involved. Brown will most definitely bring back more than just a third-round pick as he will be just 25 when the season rolls around and has already made two Pro Bowls playing both left and right tackle. Franchise offensive tackles are hard to come by, for that reason, expect the Ravens to receive an offer they can’t refuse before the 2021 NFL Draft concludes.

Fresh off franchise tagging right tackle Taylor Moton, Carolina understands the importance of having good offensive tackles. Last year, they swung a trade for Russell Okung. Unfortunately, he struggled to stay healthy and is an unrestricted free agent.

Though the Panthers may not be sure of who will be starting under center for them in 2021, having two solid tackles would be a great way to open up lanes for Christian McCaffrey.

Last season in Baltimore, Brown Jr. ranked as the 24th-best tackle with a 76.4 grade. With enough cap space to play around a bit, the Panthers could likely afford to trade for Brown and pay him the contract he deserves as a Pro Bowl player on the rise.

As Matt Fitzgerald pointed out, the Chargers’ o-line ranked at the very bottom of the league in Pro Football Focus’ grading for the 2020 season.

With their franchise QB Justin Herbert under his rookie contract for the foreseeable future, the Bolts need to do their best to keep him upright. Luckily, Herbert displayed incredible pocket awareness as a rookie, but having a porous blocking scheme is not conducive to winning in the long-term.

Not having to worry about the quarterback position for years to come and with great targets to throw to, the Chargers may be in the perfect position to swing a trade for Pro Bowl left tackle, Orlando Brown. General manager Tom Telesco will have a lot of options to choose from as he looks to improve the roster for new coach Brandon Staley. Trading for Brown could be the one that provides a boost to both their ground game while protecting Herbert’s blindside. It’s a win-win situation.

Whether it’s to protect Tua Tagovailoa or Deshaun Watson, if the Dolphins wish to become a legit playoff contender, they need to get better in the trenches. GM Chris Grier got a good start last year, drafting Austin Jackson in the first round and Robert Hunt in the second, but they both struggled to adjust as rookies. Jackson had a 52.3 PFF grade, which ranked 37th out of 38 left tackles while Hunt graded better at 65.8, finishing 20th among 38 right tackles.

If Orlando Brown Jr. joined the club, Jackson may be asked to line up at right tackle, Hunt could slide inside to guard where he played in college, and the Dolphins would have nearly a completely revamped offensive front to start 2021.

The minor trade for Isaiah Wilson shouldn’t change Miami’s plans too much, but he should help add competition to a group in desperate need of NFL-caliber offensive linemen. Adding a surefire talent such as Brown Jr. could be the missing piece that greatly improves the o-line.

The ‘Fins have plenty of ammo to trade for Brown Jr. and more than enough room under their budget to give the former third-round pick his first big NFL payday in the form of a new contract. Landing in Miami would allow him to play left tackle while continuing to develop along with a team yet to hit its peak.

We’ll see whether a team meets the Ravens’ trade demands. As some sellers like to declare, they know what their commodity is worth so a low-ball offer won’t get a deal done.