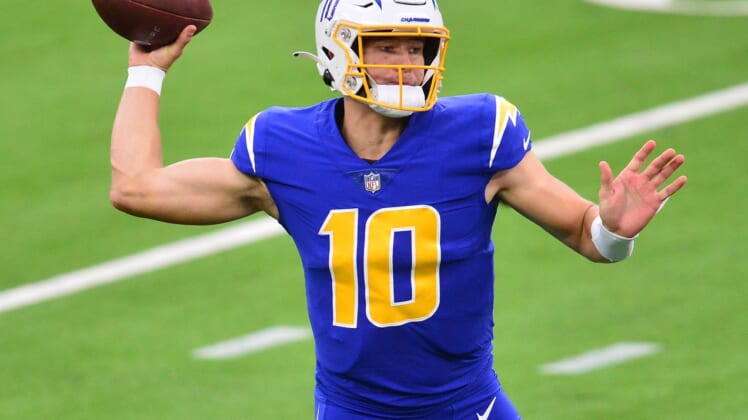 The Los Angeles Chargers have a franchise quarterback in Justin Herbert, a new, exciting head coach in Brandon Staley and a seemingly bright future. General manager Tom Telesco can bolster an already-talented roster even more with some savvy 2021 NFL Draft picks.

Telesco made the genius move of drafting Herbert in 2020 as the third signal-caller off the board. A run on QBs is expected in 2021, which could cause several of the top prospects in the class to fall to the Bolts when they pick at 13th overall in the first round.

Let’s take a look at who the Chargers should target in Round 1 based on who should realistically be available, and also look at their other top draft picks to see how else they can add to their roster.

In Pro Football Focus‘ final 2020 rankings, the Chargers offensive line ranked dead-last in the NFL. That makes Herbert’s phenomenal rookie campaign all the more impressive. It also means Telesco and the personnel department must upgrade Herbert’s protection, which will help a lackluster rushing attack improve as well.

Slater can line up either at left tackle or on the interior. He has the technical savvy, athleticism to get to the second level in the run game and the agility, quick feet and solid base to get into pass protection sets with the best of this rookie class. All those skills would help Herbert immensely as he looks to ascend among the true elite of NFL quarterbacks as a sophomore.

As mentioned at the top, though, the trickle-down effect of a run on quarterbacks could very well mean someone as special as Florida’s Pitts could fall to the Bolts at No. 13. Pitts is arguably the best tight end prospect of the past decade or so, and is really a twitchy receiver in a 6-foot-6 tight end’s body with amazing ball skills and body control.

Instead of paying Hunter Henry a ton of money on the open market just to retain him, Los Angeles could definitely take Pitts if he’s there, and probably get a better player at the position long-term.

Another key free agent for the Chargers is Melvin Ingram, who’s combined with Joey Bosa to form one of the league’s best edge-rushing tandems. However, Staley is a defensive genius and can make do with less-proven players at key spots. Paye is an athletic marvel who might still be there, depending on whether a team ahead of the Bolts like him or Gregory Rousseau as the No. 1 edge prospect.

Read More: Los Angeles Chargers: How team can build around Justin Herbert this offseason, contend in 2021

If Pitts isn’t on the board in Round 1 when the Chargers are up, they should definitely address their need for another pass-catcher on Day 2 of the draft. They could still re-sign Henry and go for another wideout instead.

While Keenan Allen and Mike Williams are viable outside receivers, what Los Angeles lacks is a twitchy, explosive slot man. Moore has the play strength to fit outside, but his short-area quickness, agility and electrifying speed make him an immediate threat to be a big-play contributor as a rookie.

Moore can take middle screens and quick slants to the end zone, and would thrive if players like Allen, Williams and Henry/Pitts are attracting the defense’s attention.

Should Slater not be available on the first day of the draft, Dickerson is all but certain to still be on the board. The Alabama product can play anywhere on the line, but his latest position of center is an ideal fit since Mike Pouncey announced his retirement. Dickerson’s stock will fall as he recovers from a knee injury, but in all likelihood, he’ll be ready by Week 1.

With some uncertainty surrounding All-Pro safety Derwin James due to his playing only five games in 2019 and missing all of last season, there’s a real chance the Bolts go with someone like Molden in Round 2. The Huskies standout was PFF’s third-ranked safety two seasons ago and No. 2 this past year, but has the skill set to play cornerback and would be a great, versatile piece to add to the secondary regardless of James’ status.

Had Thomas played in 2020 instead of opting out, he might’ve been higher up on many mock projections and draft boards. As it stands, he is a little slight of frame, yet he played at a high enough level in the Big Ten and stacks up well enough in coverage to offer Los Angeles great Round 3 value should he be under consideration here. Thomas is fast, physical and has tons of upside.

In the event Moore’s name has already been called before the Chargers can acquire him, they could go with a similarly slight but explosive slot receiver in Atwell. His 2019 sophomore season was electrifying, as Atwell racked up 69 receptions for 1272 yards and 11 touchdowns, highlighting his knack for ripping off chunk plays.

Again, targeting Tremble is based on the possibility that Henry isn’t re-signed by LA. Well at least that’s the primary reason for listing him. Tremble could still be a viable option for the Bolts, because he’s as capable of an in-line blocker as there is at the position in this class, which isn’t really Henry’s forte.

The absence of an offensive lineman targeted here is due to the diminishing returns that tend to happen on such players later in the draft, and the decent depth at the cornerback and tight end spots, which could help Los Angeles out more in the near term while Herbert is still on his rookie contract.

The reality is the Chargers could spend a little in free agency to upgrade their offensive line instead of spending their top draft asset on a prospect from that position group.

Pitts is too gifted to pass up here if he’s still on the board. Giving someone like Herbert a talent like Pitts would not only make for one of the NFL’s premier passing game combinations, but it’d add to a fun tight end group in the AFC West with Travis Kelce, Darren Waller and Noah Fant.

In this scenario, Los Angeles still spends a high pick on an offensive lineman in Dickerson who’s probably a first-round-caliber player whose recent injury is enough to drop him to this point.

Finally, Thomas represents an investment in the future of a very important position. The Bolts feature aging cornerbacks on their roster such as Chris Harris Jr. and Casey Hayward. They both hit free agency in 2022.

Between adding protection for Herbert, supplying him with arguably the best all-around pass-catcher in the draft and investing in secondary depth, this mock really is among the best outcomes Los Angeles could hope for as it seeks to challenge the Kansas City Chiefs for the division crown.