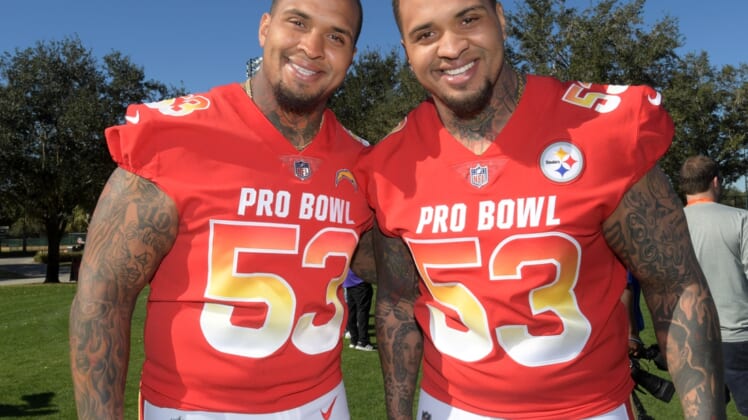 Twins Maurkice Pouncey and Mike Pouncey are retiring from the NFL.

The announcement was made on Friday by Ramon Foster, a former Pittsburgh Steelers teammate of Maurkice Pouncey.

“It’s my honor that my brothers from another asked me to announce the next stage in their life,” Foster tweeted. “After over a decade @MaurkicePouncey and Mike Pouncey are RETIRING from the @nfl.”

It’s my honor that my brothers from another asked me to announce the next stage in their life. After over a decade @MaurkicePouncey and Mike Pouncey are RETIRING from the @nfl ??. Below are their memos to thank those involved in their careers. #Steeler #chargers #Miami #NFL pic.twitter.com/v9IALOrZaX

The Pouncey brothers, both centers, were first-round draft picks from Florida — Maurkice to the Steelers with the No. 18 overall pick in 2010 and Mike to the Miami Dolphins the following year with the No. 15 overall selection.

Maurkice spent his entire career with the Steelers. He twice was named a first-team All Pro, was selected to the Pro Bowl nine times and was part of the Hall of Fame All-2010s team. He played in 134 games, all starts.

Mike played seven seasons with the Dolphins until he was cut following the 2017 campaign. He signed with the Los Angeles Chargers and had a Pro Bowl season in 2018, but the following two seasons ended with him on injured reserve. In 2019, he suffered a neck injury, and in 2020, a hip injury ended his season in September. He played in 114 games, all starts.

The Pounceys turn 32 in July.

“We began this journey at 6 years old and now at 31 we will close this chapter of our lives as I announce my retirement from the @nfl and walk away from the game,” Mike Pouncey said in a statement posted by Foster.

Maurkice Pouncey also issued a statement via Foster and alluded to the toll football had taken on him.

“I’ll always love the game of football & always will be the ultimate competitor in life @nfl @steelers ! I’m jus not in love with the sacrifice football carries on my life, my beautiful daughters Jayda, Marley & my family!” he said.