In 2020, when Danielle Hunter missed all 16 games, the Minnesota Vikings struggled like never before under former head coach Mike Zimmer. Missing their top pass-rusher, the team went from ranking seventh (2.9) in the NFL in sacks per game to 28th (1.4).

Yet, in 2021, with Hunter returning to the lineup, the Vikings ranked second in the NFL, averaging 3.0 per game. They also ranked sixth in pressure rate, according to Pro Football Reference, after being 29th the year before.

But wait, Hunter got injured in Week 8 and only played seven out of a possible 17 Vikings games this season. So, the Vikings actually generated more pressure this past season, without their top pass-rusher, does that make Hunter expendable?

With an $18 million roster bonus due to Hunter on March 20, reports have suggested that new general manager Kwesi Adofo-Mensah could look to trade the freakish defensive end instead of finding common ground on a restructure or extension.

Under contract through 2023, The Vikings don’t have to make a move here, but should they want to create some extra cap space, shedding Hunter’s contract would be a great way to do so.

So who are some potential trade suitors for Danielle Hunter? To be truthful, it may be easier to list teams who wouldn’t be interested, but here’s four who absolutely would be.

The Jacksonville Jaguars didn’t have much success on either side of the ball in 2021. This is why we’ve seen them splurge on various free agents already. But they still need to improve a pass rush that tied for the fifth-fewest sacks (32) in 2021. Of course, they could use some of their draft capital being that they have four picks in the top 100 selections in 2022 to land an established player at a position of need.

As of now, the expectation is that they will use their top selection on Aidan Hutchinson, but they could just as easily trade the pick, or fall in love with a different positional need. Especially if they know they can acquire a proven game-changer such as Danielle Hunter.

For the Vikings, they add the top pick on day two and day three of the 2022 NFL Draft, in addition to an extra selection in 2023. While trading Hunter isn’t ideal from a team-building perspective, it would shave just over $14 million from their current cap number. This would give the new regime a chance to continue adding pieces in free agency.

The trade may seem light on compensation for one of the league’s best pass rushers and it likely is, should he actually be offered to the highest bidder. At the same time, Hunter has missed 26 games in the past two seasons, the Vikings are more experienced playing with him than without him as of late and are switching to an entirely new scheme with a 3-4 front. But I still wouldn’t rush into a deal, he’s a special player when healthy and a contract extension should be the priority here. 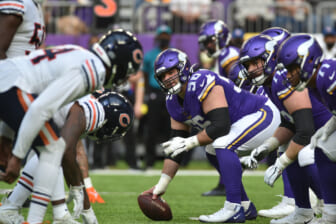 Like many teams, the New York Jets don’t have an elite pass-rusher. Quinnen Williams and John Franklin-Myers wreak some havoc, but they need more help after tying for the team lead with six sacks in 2021. The Jets could address the position with one of their two top-10 selections in the draft, but if they found a way to land a sure thing, they would probably prefer option B.

Danielle Hunter is as close to a sure thing as they get. Despite missing some more games than some would like, he’s not suddenly going to forget how to drill the quarterback. In seven games last season, Hunter had six sacks. Just based on their player stats alone this season, Hunter would be among the team leaders on the Jets. In other words, the Jets would likely leap at the opportunity to add Hunter, as most teams would.

The Vikings may want to move up the draft board while collecting more assets along the way. Who knows how the new front office wants to retool the roster, but having more draft picks never hurts. Landing the fourth pick from the Jets would be ideal for the Vikings (Kyle Hamilton), but it might be a reach as the Jets look to keep building around Zach Wilson. 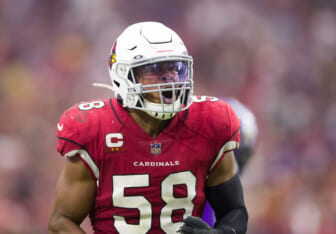 The New York Giants lack elite playmakers on defense. Azeez Ojulari looks like a nice find in the second round, but he’s only part of the solution. This is likely why many project the Giants to add another edge rusher to the with one of their two first-round picks in April.

While new GM Joe Schoen is in a similar situation as the Vikings are with a lack of current cap space, there are moves they can make to carve out some extra room, if need be. Simply put, players like Danielle Hunter don’t come along often.

So, instead of the Giants taking another roll of the dice on a pass rusher with one of their top two selections, they land one in a trade, while still holding on to two first-round picks, just a little later than they originally planned.

It’s a strange trade proposal, but the Vikings would be able to improve their draft position, perhaps securing a player they covet in the top ten without having to completely dismantle their current draft capital. In fact, they get even more lotto scratch tickets to play with. 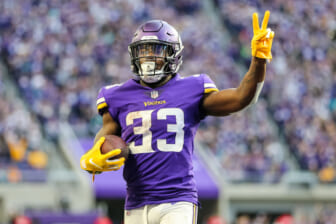 Everyone knows the Kansas City Chiefs have the offensive firepower to hang with any NFL team in the league when it comes to playoff time. Patrick Mahomes does all the heavy lifting and now that Tyrann Mathieu appears set to leave via free agency, defensively, they could use a few more players who can help swing the momentum in their favor.

Ranking in the bottom-five in team sacks, but the top-five in pressure rate, the Chiefs do get after the quarterback, but they’ve had issues finishing the job. Mahomes has helped them reach the Super Bowl in two of his four seasons, but the AFC keeps getting more and more stacked each offseason. Now, the Broncos may be emerging as a top contender with Russell Wilson, the Chargers are likely only going to keep improving around Justin Herbert, and the Raiders were already a playoff team a year ago.

All four of the teams in the AFC West have a premier quarterback, finding a way to generate pressure will be more important than ever going forward as they can’t just keep running up the scoreboard and hope they end with the high score by the time the clock expires.

Instead, they can go on the offensive, by getting aggressive trading for an elite game wrecker such as Hunter. Parting with a first-round pick is never fun, but look at it this way. Will Hunter make more of an impact in his first season than whoever is still available at pick No. 30? Yes, there’s a good chance he will. And Hunter is still just 27 years old, offering plenty of long-term potential just as an incoming draftee would.

Of all the trade packages listed here, this one might accomplish the most from Minnesota’s perspective. Not only do they get Hunter out of the conference so they don’t have to help a competitor, they add immediate draft capital that allows them to wiggle around in the upcoming draft should they want to move up or down.

At the end of the day, trading Hunter would be a massive move away from trying to win now, despite what the draft picks may offer. Hunter is already a premier player and he has several strong seasons left in the tank. But a trade would also offer a new chance to start over per se, molding the roster and Ed Donatell’s new defense to their liking. And of course, if Hunter were traded, finding a pass rusher would immediately move to the top of the Vikings’ needs, along with finding some competent cornerbacks for the back end. 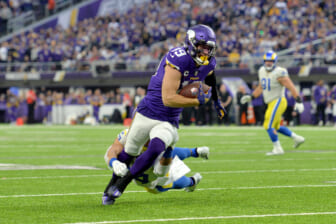