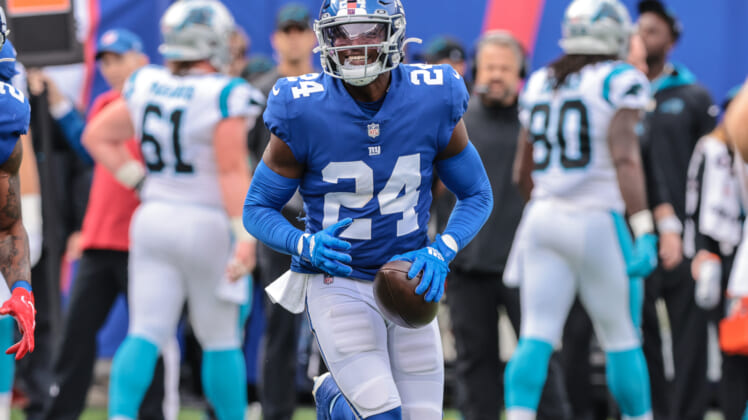 One of the topics New York Giants general manager Joe Schoen mentioned since taking the gig was a goal of shaving roughly $40 million off their 2022 salary cap. We’ve already seen some of the beginning signs of the squeeze with the release of Kyle Rudolph and Devontae Booker, and rumors of asking Sterling Shepard to take a large pay cut as well.

The next name that could be on the move is cornerback James Bradberry. Signed two seasons ago by former general manager Dave Gettleman to a three-year, $43.5M contract, Bradberry is set to carry a $21.8M cap hit in 2022. This is way too much money for a non-Jalen Ramsey-level corner.

In an effort to cut $12.1M off their cap, the Giants could look to trade Bradberry this offseason, suffering a $9.7M dead cap hit. With Bradberry entering the last year of his contract, Ian Rapoport of NFL Network suggests the Giants just might trade their No. 1 cornerback this offseason.

Here are four teams who could be intrigued by a James Bradberry trade this offseason.

When Robert Saleh took the head coaching gig with the New York Jets a season ago, he likely expected some early growing pains in his first season. But not even Saleh would have anticipated the Jets to rank 30th in the NFL in passing yards allowed. Not with his defensive scheme.

Looking closer at the players Saleh had on hand, there were already low expectations, but that only leaves more room for growth, right? A quick way for the Jets to experience a sharp turnaround in their secondary is by adding a proven veteran at the position. With 91 career starts, Bradberry has picked off 15 passes, giving their secondary a much-needed playmaker with ball skills.

The top priority for the Los Angeles Chargers this offseason likely centers around them improving their league-worst run defense from a year ago. Another way to make life easier on the front seven is by adding to their cornerback group, especially with Chris Harris set for free agency.

Luckily, the front office is in a good position to do so with the second-most salary cap space in the NFL at an estimated $57.5 million, which should allow for plenty of space to fit Bradberry under the budget via trade. They selected Asante Samuel Jr. in the second round of the 2021 NFL Draft, but at 5-foot-10 there’s no guarantee he becomes a No. 1 corner. Bradberry’s 6-foot-1 frame would play nicely opposite Samuel in Brandon Staley’s D.

The once ferocious defense of the Baltimore Ravens was nowhere to be seen during the 2021-22 season. Sure, they’ve made some coaching changes, but their players need to improve, especially in the secondary after allowing more passing yards per game than any other NFL team. They could even move on from Marcus Peters, saving $6.4M in the process.

Either way, with Jimmy Smith entering unrestricted free agency and after the performance we saw from the rest of the group a year ago, the Ravens need to add to the cornerback position this offseason.

James Bradberry adds more speed to the secondary to help deal with the Tyreek Hills of the world and has proven effective in both man and zone coverage. He may have had a down year like many of the Ravens defenders, but Bradberry’s a prime candidate to bounce back in 2022.

The Cincinnati Bengals were just a few plays away from securing the first Super Bowl trophy in their 53-year franchise history. They’re likely to worry about the offensive line first and foremost, looking to protect Joe Burrow, but there are other areas they can improve. Cornerback is one of them.

Allowing the seventh-most passing yards during the 2021-22 season, the Bengals could look to add a playmaker to help supplement Jessie Bates once he’s re-signed to a hefty contract. Trading for Bradberry isn’t likely to cost more than a mid-round selection and he’d immediately compete with Chidobe Awuzie to be the top cornerback on the staff, and that’s not necessarily a bad problem to have.