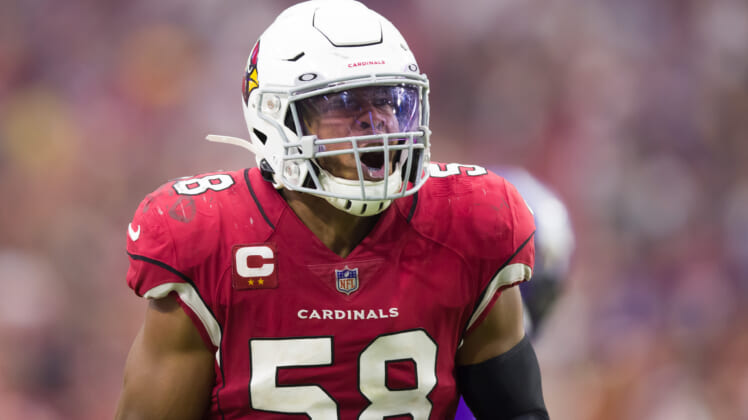 In switching to a 3-4 defense, Minnesota Vikings general manager knew he needed to provide new defensive coordinator Ed Donatell with some pieces to fit the new defensive scheme. Near the top of that list was adding to their existing linebacker corps. They did just that today by signing Jordan Hicks, formerly of the Arizona Cardinals and Philadelphia Eagles to a two-year, $12 million contract.

What does the addition of Jordan Hicks mean for Eric Kendricks, Anthony Barr?

Some might say, now that the Vikings added Jordan Hicks, that Eric Kendricks could be the next veteran to leave the Land of 10,000 Lakes, choosing to take the cap relief and possible draft capital included in a potential trade. There have been reports of the Vikings looking to move on from some veterans, but other than Michael Pierce, we have yet to see any of these rumors actually come to fruition.

As you can see, the cap savings included from moving on from the All-Pro linebacker isn’t all that significant, especially when compared to the dead money left behind. This basically means the Vikings, unless approached with an offer they can’t refuse, perhaps a second-round pick, likely won’t look to get rid of one of their best defensive players this offseason.

There’s no need to, he still performs at a high level as one of the better coverage linebackers in football.

Anthony Barr, his fellow UCLA grad, is an unrestricted free agent, so he could already be gone, but he has yet to sign elsewhere this free agency period. Plus, Hicks plays the middle, next to Kendricks in a 3-4 scheme, whereas Barr plays along the edge, which means signing Hicks shouldn’t hurt Barr’s chances of re-signing with the team, if there’s mutual interest.

But in the grand scheme of things, signing Hicks means nothing for the future of Kendricks or Barr. Hicks should complement Kendricks up the middle if anything and Barr can still switch back and forth from rushing the quarterback, or dropping into coverage. There’s room for all three if the financials work.

For now, the Vikings added a tackling machine, in the hopes he can continue helping them reshape their woeful run defense from a year ago in which they allowed the seventh-most rushing yards per game. It’s only the beginning of addressing their needs, which will surely continue in the 2022 NFL Draft in April, where the Vikings currently hold the 12th pick.