Jacksonville Jaguars make move that could hint at Aidan Hutchinson going No. 1 in 2022 NFL Draft 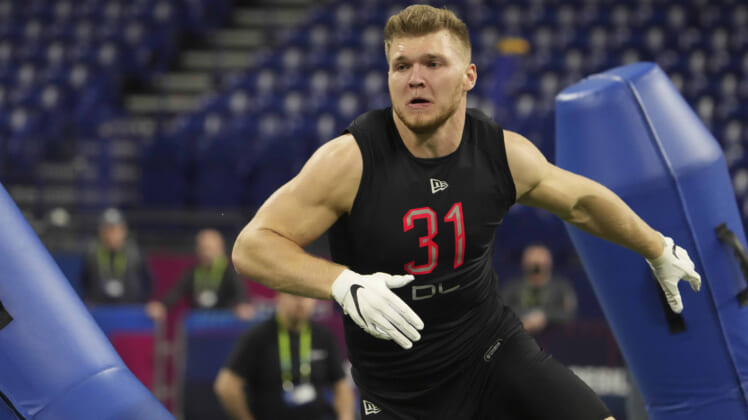 Some years, we know well ahead of time who the No. 1 overall pick will be, but for 2022, few draft analysts can agree on a consensus top pick for April’s player selection process. Many have linked the Jacksonville Jaguars to an offensive tackle such as Evan Neal or Ikem Ekwonu in the past few months, but one of their most recent transactions could erase that idea altogether, opening up a wider possibility for defensive end Aidan Hutchinson to become the first overall pick.

With the Jaguars placing the franchise tag on left tackle Cam Robinson for the second consecutive season, it would appear unlikely for the team to then use their first selection also on a player who fills the same position. This lines up with what Peter King recently suggested as well.

Cam Robinson getting tagged could mean the Jacksonville Jaguars have settled on Aidan Hutchinson, or another player at No. 1 instead. Of course, we can’t rule out an offensive tackle entirely. Robinson has been tagged, but that doesn’t necessarily mean he’s in their long-term plans.

For whatever reason, the organization has decided to tag him two years in a row now, despite Robinson arguably not being among the very best at his position. Clearly, the Jaguars feel otherwise, or at the very least value him as a contributor and don’t want to lose him, yet.

Being tagged consecutively means Robinson is automatically in line for a 20% raise over last year’s salary amount which was $13.75 million. In 2022, Robinson will earn $16.66 million, unless the Jags otherwise come to an agreement on a long-term extension.

Either way, instead of targeting an offensive lineman to help protect the blindside of Trevor Lawrence, now it appears the team may be looking at strengthening the defense instead. You really can’t go wrong in this year’s draft.

Drafting Hutchinson would give the Jaguars a fearsome pass-rushing duo, with Josh Allen also terrorizing quarterbacks in Duval. While we’re still over a month away from the first round of the draft, which will take place on April 28th, the Jaguars may already know who they’re taking No. 1. Unless, of course they’re blown away with a trade offer between now and then.