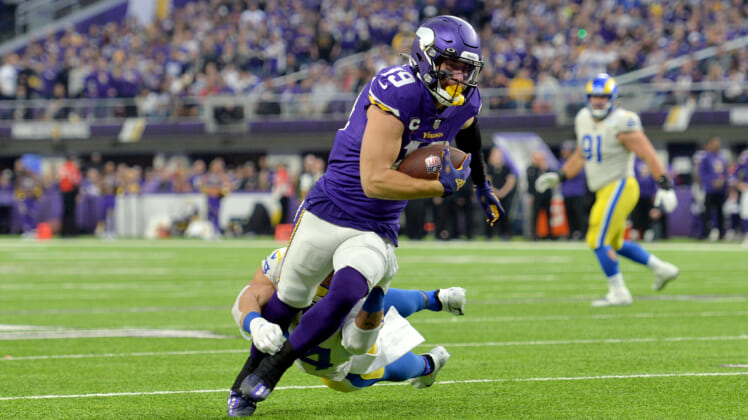 Reportedly, that could include selling off veterans such as Thielen in salary dumps — acquiring very little in return.

If so, Thielen would have a pretty robust market on the NFL trade block. Here’s a dude who’s averaging 75 receptions for north of 945 yards and nine touchdowns over the past five seasons.

Sure his cap hit of $12.05 million for an acquiring team could be a deterrent. Even then, those finances can be worked out post-trade. Below, we look at four ideal Adam Thielen trade scenarios.

It’s rather clear that Indianapolis’ focus right now is on the quarterback position following the trade of Carson Wentz. In no way does this mean general manager Chris Ballard and Co. are not going to add a wide receiver with the ample amount of cap room the Colts boast. They need an upgrade over a watered-down version of T.Y. Hilton.

They need someone to step up behind Michael Pittman Jr. Running backs Jonathan Taylor and Nyheim Hines were second behind Pittman Jr. in catches last season with 40 each. Pending free agent receiver Zach Pascal caught 38 passes. Perhaps, offering up the third-round pick they acquired in the Wentz trade from Washington could get the deal done here.

There was some thought given to the idea of the Los Angeles Chargers chasing after Davante Adams before he was franchise tagged by the Green Bay Packers. Instead, Los Angeles signed Mike Williams to a massive contract extension. Why not find Justin Herbert another target to go with Williams and Keenan Allen? Adding Thielen to the mix would be absolutely huge here.

The Chargers are also currently $43.53 million under the 2022 NFL salary cap. They can afford to take on the whole of Thielen’s $12.05 million hit for next season.

There’s no reason to believe that Denver is simply going to stop adding talent after acquiring Russell Wilson in a blockbuster trade with the Seattle Seahawks. Veterans are going to want to join him on a team that now has legitimate Super Bowl aspirations.

The crazy thing here is that Wilson is set to count a mere $24 million against the cap in 2022 — giving general manager George Paton more room to add talent to the mix. Teaming Thielen up with Courtland Sutton and Jerry Jeudy would be an absolute boon.

Deebo Samuel and Brandon Aiyuk represent one of the better young wide receiver tandems in the NFL. San Francisco is also a mere $3 million under the cap with the Jimmy Garoppolo situation still unsettled. It has to consider signing both Samuel and star edge rusher Nick Bosa to extensions.

So, why would general manager John Lynch go after Adam Thielen? Can the 49ers even afford him? Well, there’s a lot to look at here. By trading Garoppolo and restructuring multiple contracts, the 49ers could find themselves roughly $50 million under the cap. They are also going to be in the market for another receiver. Acquiring Thielen on the cheap to team up with Samuel, Aiyuk and George Kittle would just be brilliant in Kyle Shanahan’s offense.