The first thing Seattle Seahawks fans witnessed when Geno Smith took over after Russell Wilson‘s ugly finger injury, was that the 2013 39th overall pick actually looked pretty good. Yet, that was on short notice, without any defensive gameplanning.

After all, Wilson never leaves the game. The Rams likely spent all of zero seconds preparing for the likelihood of Smith or any QB other than Russ throwing a pass on Thursday night.

Still, Smith deserves some credit for staying ready and for giving his team a chance in a big NFC West divisional game. With the only other quarterback in the organization being 2020 sixth round pick Jake Luton, it shouldn’t surprise anyone if the Seahawks bring in another quarterback before Week 7.

Here are four alternative quarterback options for the Seahawks until Wilson returns from injury after the reported 6-8 week recovery time.

Since being released from the New England Patriots prior to Week 1 after Mac Jones won the starting job, Cam Newton has yet to receive any real interest on the open market. Free to sign with any team, it’s possible Newton is waiting for a starting opportunity again.

While a potential starting role with the Seahawks wouldn’t last forever, it could be the lifeline Newton needs to show teams what he’s capable of in 2021. There’s no denying Newton is a better backup quarterback than several others currently on NFL rosters. Having D.K. Metcalf and Tyler Lockett to throw to should be an enticing offer for anyone looking to get back into the league. 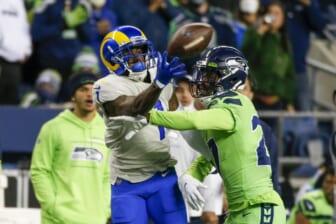 Oddly enough Both Nick Foles and Russell Wilson were third-round selections in the 2012 NFL Draft. While their careers have been very different, they both have one Super Bowl victory apiece. With the Seahawks at 2-3, in last place in the NFC West, another trip to the promised land may not happen this season.

That doesn’t mean they won’t still do their best to remain competitive. The Seahawks don’t even have their own first-round pick in 2022 due to the Jamal Adams trade, their best bet is competing their tails off. Unless a full rebuild is in the works.

If Geno Smith ultimately is not the answer or if Wilson did get traded, it likely wouldn’t cost more than a future sixth-round pick (they don’t have a 2022 sixth either) to acquire Foles from the Chicago Bears. 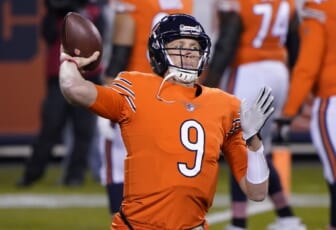 As one of the more overlooked backups in the league, Buffalo Bills quarterback Mitchell Trubisky could offer some hidden potential. Sitting behind star Josh Allen, there’s a case to be made for Trubisky to still take a major step in his development.

Remember, this is the same system, coaching staff, and atmosphere where Allen himself saw massive improvements in his ability to throw accurately while improving his throwing motion. Trubisky, drafted even higher than Allen, still has plenty of room for growth. The Bills haven’t been afraid to throw him into the action so far, maybe Trubisky can be the Seahawks’ unsung hero?

4. Seattle Seahawks go all in for Deshaun Watson

Granted, the Seahawks may not have the draft capital the Houston Texans desire in a possible Deshaun Watson trade, but they do have one very valuable piece for any team without a franchise quarterback. They have Russell Wilson, another franchise quarterback, but seemingly every offseason there are questions surrounding his future in Seattle.

The Texans aren’t getting any offers for any other franchise quarterbacks, can they do any better than Russ? Probably not. If I’m the Texans’ general manager Nick Caserio, I’m placing a call to Seahawks’ general manager John Schneider yesterday. Houston won’t be going anywhere this season, Wilson being hurt, returning next season would be no issue at all.

The biggest hurdle is whether or not Wilson would be willing to waive his no-trade clause to play for a downtrodden franchise. Just as Watson doesn’t want to go through another rebuild, my guess is there’s no chance Wilson wants to start over in Houston.