The Carolina Panthers' trade for Sam Darnold is yet another high-profile quarterback move that could soon lead to other big trades around the NFL. 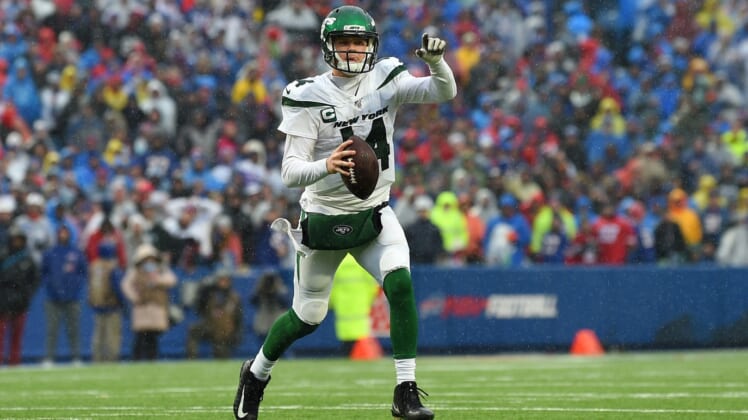 The 2021 NFL Draft fundamentally changed with the Carolina Panthers’ trade for Sam Darnold.

First of all, the New York Jets are definitely taking a quarterback at second overall, if that was ever a doubt. Secondly, Carolina probably won’t take a rookie signal-caller with the eighth overall pick.

This also opens up a world of possibilities as to what other QB-needy teams might do to upgrade at the most important position.

Get ready for a few really awesome trade scenarios we’d love to see unfold after the Panthers’ Darnold deal — and in two of the cases, these are two-for-one specials.

So, with the news that Teddy Bridgewater is seeking a trade out of Carolina, it’d only make sense that he’d land with the Denver Broncos.

Play-caller Pat Shurmur shared time with Bridgewater in Minnesota, and the latter is very familiar with the West Coast system Shurmur runs. This presents a chance for Denver to give up very little and still get a legitimate veteran to compete with Drew Lock for the starting gig.

That is, until draft night. With serious questions about Lock’s future and his fit in Shurmur’s offense, the Broncos have the ultimate golden ticket to trade up to the fourth overall pick with the Atlanta Falcons.

Lock going to Atlanta is a logical next step for both teams. The Falcons wouldn’t be putting tons of pressure on Matt Ryan, whose benching would be called for if the team started slow in 2021 and had a fourth-overall QB sitting behind him.

Meanwhile, this maneuver would allow Denver to either choose between (probably) Mac Jones or Justin Fields. The former could well start over Bridgewater, while the latter is an ideal candidate to sit as a rookie in a scenario very similar to what the Broncos’ AFC West rival Kansas City pulled off when Patrick Mahomes eventually took the reins from Alex Smith.

After an absolute spending spree in free agency, the Patriots’ skill position talent and overall roster depth is far better than it was in 2020. That means they’re arguably a QB away from taking a huge step forward this year.

Cam Newton could definitely go off in his second season with New England, what with a full offseason and far superior pass-catchers flanking him. However, Jimmy Garoppolo was supposed to be Tom Brady’s heir apparent in the first place. The last season in which he was healthy, he led the San Francisco 49ers to a Super Bowl berth.

It’s puzzling as to why so many are surprised by the high compensation quarterbacks such as Carson Wentz and Sam Darnold. They play easily the most valuable position on the field and are cost-effective players. The compensation price inflates as a result.

Since the Pats unloaded so much cash on the open market, they don’t necessarily need a ton of draft picks right now. They can part with a mid-first-round pick to get back their beloved Jimmy G. In fact, you can bet Bill Belichick would love to do that, especially doing business with the team he traded Garoppolo to in the first place.

The scenario is a win for all parties. New England’s outlook at QB is much improved around a player they’re familiar with. The 49ers get another first-round pick after sacrificing two future No. 1’s to move from 12th to third in the 2021 NFL Draft order. Garoppolo goes back to the place where his NFL journey started, and hopefully assumes the role he was initially destined to fill.

The Bears must hear their fans decrying the fact that Andy Dalton is their QB1. Say goodbye to yet another year of Khalil Mack’s prime, and your job, Ryan Pace. That is, unless you pull a rabbit out of your magic hat and wheel, deal and will your way to a new field general.

Now that Carolina is seemingly out of the QB equation, there’s actually a path here for Chicago to make the ultimate move. Here’s the route and mock draft scenario we’ve come up with in which the Bears somehow manage to totally redeem themselves:

It’s a steep price for Chicago to pay, and giving up Allen Robinson isn’t the most feel-good story ever. However, Robinson is probably going to walk as a free agent in 2022, so you might as well justify getting rid of him in a package that gets you your next franchise quarterback.

The mock simulation from Pro Football Focus following this trade gives Chicago a choice between North Dakota State’s Trey Lance and Jones. It’s very much in the realm of possibility that Jones is already off the board to San Francisco, and it’s Fields here instead. That’s all a matter of preference on the 49ers’ part.

This way, not only does Detroit get the No. 1 receiver it was going to target at seventh overall anyway, but now can still get someone like Rashod Bateman or Terrace Marshall Jr. at 20th overall. The Lions will also have three first-round picks in the 2022 draft in the likely event that Jared Goff doesn’t work out, which could actually convince Robinson to sign a long-term extension, against all odds.

Meanwhile, smart money is that the Bears go with the dual-threat dynamo Lance, whose superior upside, experience in a pro-style offense and ability to contribute as a stark contrast to Dalton in 2021 all make him more appealing than Jones.

Chicago can then target a receiver at 52nd overall. Strong prospects who should be available include North Carolina’s Dyami Brown, Oklahoma State’s Tylan Wallace and Amon-Ra St. Brown of USC.