Russell Wilson could return for Seattle Seahawks in Week 10

Seattle Seahawks superstar quarterback Russell Wilson injured his finger in a Thursday Night Football matchup against the Los Angeles Rams in Week 5. The Seahawks placed Wilson on injured reserve, causing him to miss at least three games, if not more.

With the injury, Wilson had to miss the first start of his NFL career, snapping a 149-game starting streak.

While reports have been all over the place regarding Wilson’s expected recovery time, saying anywhere from 4-6 weeks, now it’s being reported Russ will have the pin removed from his finger sometime this week.

Having the pin removed gives Wilson a chance to play as soon as he’s eligible to come off the IR, in Week 10 against the Green Bay Packers. 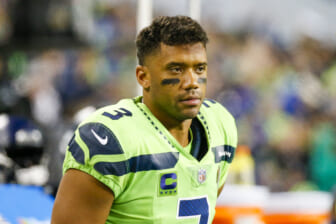 Geno Smith started their Week 6 game in the absence of Russ, but the Seahawks fell to the Pittsburgh Steelers 23-20. As the 2-4 Seahawks look to stay alive in the competitive NFC West divisional race, every game will be more important than the last. Getting Russ back is the key to their season.

With upcoming matchups against the 3-2 New Orleans Saints, 1-5 Jaguars, and then a bye, it makes sense that Wilson would want to be ready to go when the Seahawks take on Aaron Rodgers and the Packers in Week 10. For now, it sounds like Wilson may be back just in time.