The Jacksonville Jaguars' 2021 schedule is rather easy in the early going. Can they generate momentum and make a run for the AFC South title? Find out here.

Myles Jack can help hold Kyler Murray‘s rushing ability in check, but that’d leave Jacksonville exposed in coverage. Arizona has too many weapons on its front seven as well, between Chandler Jones, J.J. Watt, Isaiah Simmons and Zaven Collins. The Cardinals’ personnel just happens to match up really well against the Jags.

All our predictions are based on the Jaguars keeping and starting these key players: 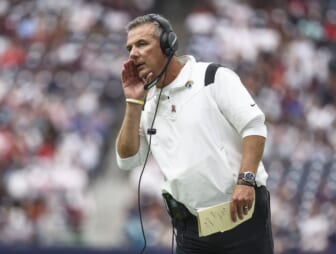 Simply put, the Texans are a disaster. Their projected QB depth chart led by Tyrod Taylor is straight-up bad, and their deepest position group, running back, won’t help against most teams. Thankfully for Houston, the Jaguars aren’t most teams. Jacksonville laid an absolute egg in Week 1, and got rolled by maybe the worst roster in the NFL. Bad look. 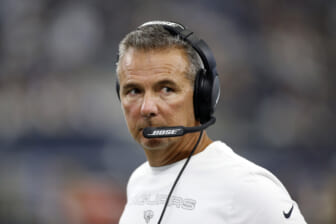 Teddy Bridgewater worked hard in training camp to earn the starting QB job over Drew Lock, and he’s balled out so far in Denver. Bridgewater threw for 328 yards and two scores against Jacksonville in Week 2. If not for a late kickoff return for a touchdown by the Jaguars’ Jamal Agnew, this outcome would’ve been even more lopsided.

Should be an epic battle duel between the past two No. 1 overall picks in Lawrence and Joe Burrow, but frankly, it’s more realistic to expect the Jaguars’ younger defense to step up than Cincinnati’s dreadful front seven. Jacksonville should be able to play keep-away, and the Bengals’ poor home turnout will only work to the visitors’ advantage.

Both duels between these divisional foes should be high-scoring, and it feels like a split is coming, because the departure of Titans offensive coordinator Arthur Smith is at least going to have some negative effect. Plus, Tennessee’s defense didn’t improve that much this offseason. The exciting trade for Julio Jones doesn’t make the Titans better on the side of the ball they desperately need to improve. 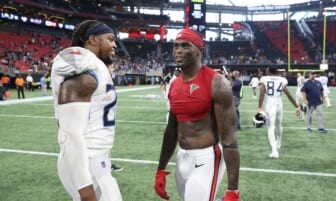 Tua Tagovailoa looked shaky as a 2020 rookie, to the point where it already feels safe to project Lawrence as the far superior quarterback. That’s bad news for Miami, who otherwise has a championship-caliber roster for the most part, especially on defense.

See where the Jaguars rank in our latest NFL power rankings

It’ll be fascinating to see how Russell Wilson‘s future plays out in Seattle. There might be more tension than usual in the locker room during the season. This should be closer than expected, yet if enough 12th Man fans are packing the Seahawks’ stadium, that’ll probably be too much for the young Jags to overcome.

Two players named Josh Allen in this contest, but the Bills have the better, more valuable one at quarterback. Allen should dismantle the Jaguars, and a seasoned defensive coach in Sean McDermott will scheme up too many exotic looks for Jacksonville’s offense to keep pace in a shootout. 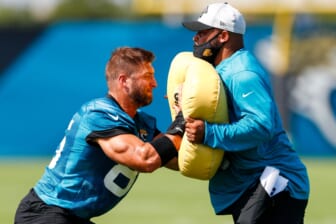 Playing at Lucas Oil Stadium isn’t easy, but since the Colts have a total wild card at QB in Carson Wentz and no clear answer at left tackle with Eric Fisher coming off a torn Achilles, Jacksonville should keep this one surprisingly competitive. In the end, home-field advantage helps Indy edge it out.

That San Francisco running game is liable to overwhelm Jacksonville. Even with Malcom Brown providing a huge upgrade on the interior defensive line, once the 49ers backs get to the second level, they should be able to run all over the Jaguars.

Notorious for blowing big leads, Atlanta has a long way to go to exorcise those demons. Kyle Pitts will help the offense, but the Falcons’ defense still leaves much to be desired. Lawrence should carve them up and catalyze a comeback win.

The Rams represent what the Jaguars probably aspire to be in some form or fashion. Tons of speed, perimeter playmakers on offense and defense, and an explosive quarterback talent. Matthew Stafford should feast on the Jaguars secondary with the weapons at his disposal in LA.

Don’t be surprised when the reigning division champs get pushed to the limit in Nashville. However, given the running prowess of Derrick Henry, stellar play under center from Ryan Tannehill and Julio Jones in the mix, it’s difficult to envision a scenario where Jacksonville escapes with a road win. 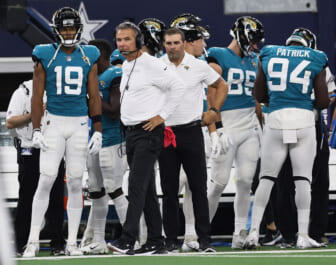 Houston had far less cap space and draft capital to play with this offseason than the Jaguars, and now is dealing with a Deshaun Watson scandal that has no end in sight. Not a great combo. It could lead to a winless Texans season.

The top two picks go head-to-head! Zach Wilson leads the Jets, who’ve definitely bolstered their offense, yet have neglected many key areas on defense. This should come down to what happens at the line of scrimmage. Given how suspect the Jags’ o-line is and how well New York has built its unit around Wilson, Gang Green has the edge here.

Young QBs historically don’t fare well at all against Bill Belichick. Although the Patriots’ offense isn’t going to scare anyone too much, if you’re a Jaguars fan, don’t expect Lawrence to waltz into Foxborough as a rookie and outfox The Hoodie. 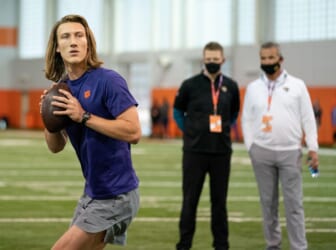 It’s not a stretch to picture Jacksonville pass-rusher Josh Allen teeing off on Wentz, along with 2020 first-round pick K’Lavon Chaisson. If that young duo can knock the Colts signal-caller off his spot, Indianapolis will have its hands full on the road. That said, the visitors probably have enough firepower to get the “W” in the season finale.

Will the Jaguars do enough to make the postseason? Find out in our NFL playoff predictions