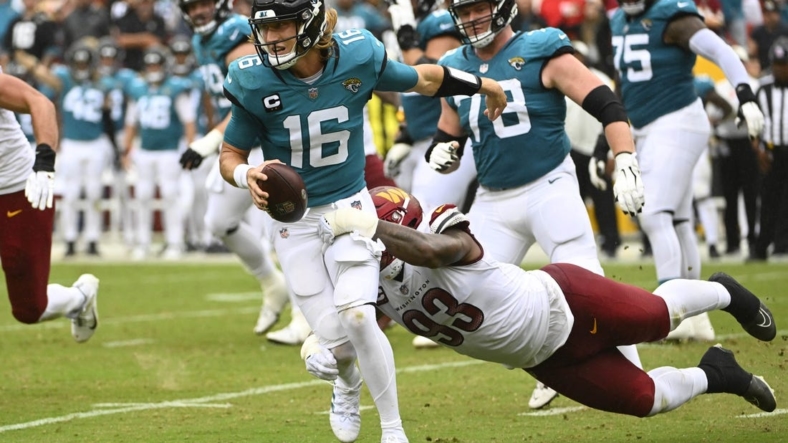 Carson Wentz recovered after throwing two-second half interceptions in his debut to rally host Washington to a 28-22 victory over the Jacksonville Jaguars in the team’s first game as the Commanders on Sunday in Landover, Md.

Wentz completed 27 of 41 passes for 313 yards and four touchdowns, including two in the final 10 minutes to ruin the Jacksonville debut of coach Doug Pederson.

In a seesaw game, Washington (1-0) came from eight points down in the fourth quarter after surrendering 19 straight points and blowing an 11-point halftime lead.

After throwing interceptions on consecutive possessions, Wentz shook off the miscues to throw a 49-yard touchdown strike to Terry McLaurin to trigger the comeback.

Wentz threw his second touchdown of the day to rookie wideout Jahan Dotson with 1:46 to go.

Then with 1:10 left, Darrick Forest sealed the victory with an interception near the sideline.

It was the lone turnover of the afternoon for Trevor Lawrence, who completed 24 of 42 passes for 275 yards and a touchdown.

Lawrence was in sync with newly acquired wideout Christian Kirk, who had six catches for 117 yards. James Robinson carried 11 times for 66 yards with a scoring run and a touchdown reception for the Jaguars.

Antonio Gibson had seven catches for 72 yards and carried 14 times for 58 yards for Washington.

Fueling the Jaguars’ comeback were interceptions by Tyson Campbell and Travon Walker, the No. 1 overall pick in this year’s NFL Draft.

Jacksonville marched 60 yards with the opening kickoff, setting up a 33-yard field goal by Riley Patterson. But Washington responded with touchdown drives on its first two possessions.

Wentz completed a 26-yard pass to Gibson to set up a 3-yard touchdown pass to Curtis Samuel that gave the Commanders the lead. Samuel finished with eight catches for 55 yards.

Then, after forcing a punt, Washington took a 14-3 lead with a 14-play, 71-yard drive, capped by a 7-yard scoring pass from Wentz to Dotson.

Jacksonville drove inside the Washington 10 twice in the final six minutes of the first half but came up empty. On fourth-and-goal from the 3, running back Travis Etienne was open in the flat but dropped a potential touchdown pass.

On the Jaguars’ third snap of the second half, Kirk made an over-the-shoulder catch for 49 yards to set up a 3-yard touchdown pass by Lawrence to Robinson.