New York Giants prove to be too big for Carolina Panthers, move to 2-0 on 13 points from Graham Gano 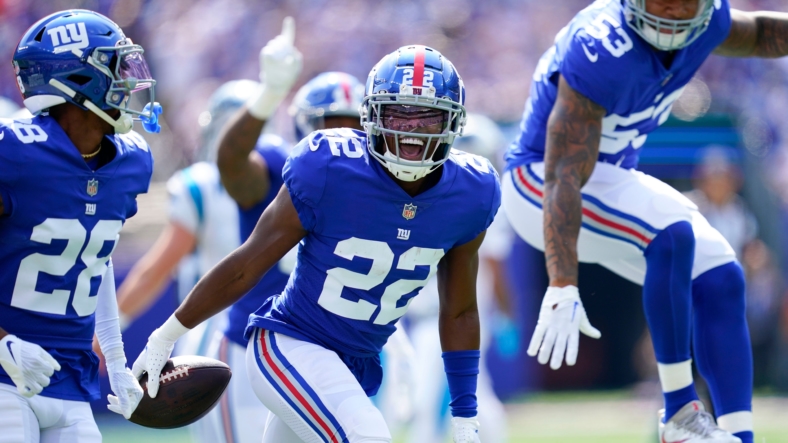 For the second time in two weeks, the New York Giants were on the winning end of a tightly contested game as they defeated the Carolina Panthers 19-16 in their home opener.

With the win, the Giants improve to 2-0 for the first time since 2016, and if the Minnesota Vikings defeat the Philadelphia Eagles on Monday night, they’ll find themselves in sole possession of first place in the NFC East.

The game couldn’t have gotten off to a better start for New York as Carter Coughlin forced a fumble from Chuba Hubbard that was recovered by Dane Belton on the opening kickoff. The Giants’ offense was unable to get a first down on their first possession of the game and had to settle for a Graham Gano 36-yard field goal to take a 3-0 lead.

On Carolina’s first offensive possession of the game, it was the Giants’ defense’s turn to force a turnover as Darnay Holmes forced a Robbie Anderson fumble which was recovered by Adoree’ Jackson at the Panthers’ 40-yard line.

But once again, the offense struggled to get anything going and had to call on Gano, who connected on his second field goal of the day, this time from 33 yards out.

New York’s offense struggled the remainder of the first half, but thankfully their defense stepped up. They shut down Baker Mayfield and the passing game and held running back Christian McCaffrey in check. The Panthers were able to connect on two Eddy Pineiro field goals to tie the game at six going into halftime.

The game would remain tied until the Panthers’ first drive of the second half that went 67 yards in just three plays and culminated with a Mayfield 16-yard pass to DJ Moore to go ahead 13-6.

However, their lead would be short-lived as Big Blue’s offense finally woke up as Daniel Jones engineered an eight-play, 75-yard drive that ended with a 16-yard touchdown pass to tight end Daniel Bellinger. It was the rookie’s first career touchdown reception.

Defenses put the clamps on all offensive efforts at MetLife

Both teams’ defense would then re-establish their dominance as the next five possessions ended in punts.

Then, with 12:31 remaining in the game, Cano would convert on his third field goal attempt of the day, this time from 51 yards out, to put New York back in front 16-13.

But as the theme of the second half would go, no team had the momentum for an extended amount of time. Carolina would tie the game on their next possession on a Pinero 38-yard field goal.

After being held in check for most of the game, Saquon Barkley gained 18 yards on the ground on the Giants’ first two plays on their next possession. Gary Brightwell also had a key run of 14 yards later In the drive that got the Giants into Panthers territory.

The drive would eventually stall at the Panthers’ 38 yard-line, and once again, Cano was called upon and would connect on a 56-yard field goal with 3:34 remaining in the game to put New York up 19-16.

Now it was up to the defense to step up, and they did. New York forced a three-and-out thanks to a Julian Love sack of Mayfield on a 3rd-and-6 from the Panthers’ 46-yard line.

With just 2:06 remaining in the game and the Panthers having three timeouts remaining, New York needed two first downs to wrap up the game. The first conversion occurred on an encroachment penalty on the Panthers. Then facing a 3rd-and-6 from the Giants’ 40-yard line, Jones would scramble on a bootleg and gain 11 yards to seal New York’s second victory of the season.

Related: See where the New York Giants rank in the 2022 NFL Power Rankings

An ugly win is still a win

It may have been an ugly win, but in the NFL, a win is a win. In years past, New York would typically lose these types of games. But as Brian Daboll said in his postgame press conference, “We have a group of tough-minded guys.”

The defense has to take the bulk of the credit for the win as they held the Panthers to 275 yards of total offense. What made this more impressive is that the Giants did this without their two best pass rushers, Kayvon Thibodeaux and Azeez Ojulari.

The offense, however is a work in progress, but you can expect them to improve as the year progresses.

Daniel Jones completed 22-of-34 passes for 176 yards and a touchdown and, more importantly, did not turn the ball over.

Saquon Barkley finished the game with 72 yards on the ground on 21 carries and had three receptions for 16 yards.

Next up for Big Blue is a showdown in Week 3 on Monday night against the Dallas Cowboys as they look to improve to 3-0.