MLB games today will offer daily predictions and the full schedule for the entire season from 2022 Opening Day to the World Series. As part of our year-round MLB coverage, we’ll provide analysis, the latest news and MLB trade rumors.

Bookmark this page for in-season updates to our MLB predictions.

The Los Angeles Dodgers might have lost the NL West in 2021, but there’s no doubt this is the best team in the division entering the 2022 season. From the starting rotation to the lineup, Los Angeles holds the advantages and its farm system is better. With Freddie Freeman joining the mix, the Dodgers are undoubtedly the best team in MLB. After adding closer Craig Kimbrel, the gap between Los Angeles and its NL West foes is even wider.

No one saw the San Francisco Giants being that good last season, they surpassed their wildest expectations. Losing Kevin Gausman (Toronto Blue Jays and Buster Posey (retirement) are two huge blows, leaving voids that can’t be filled directly. The rotation is strong, especially after signing Carlos Rodón. We also like the depth pieces added to the staff (Carlos Martinez, Matt Boyd) and it will prove crucial this year. However, concerns at catcher and in the outfield put SF a tier below the Dodgers. If there weren’t enough concerns, early IL stints for Evan Longoria and Lamonte Wade Jr. heighten worries with the Giants lineup and its diminishing depthj. 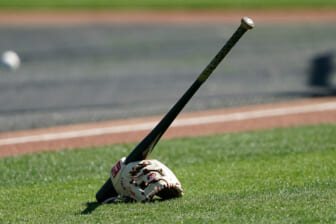 Bob Melvin is the perfect skipper for the clubhouse, providing both strong in-game management and a leader who can help keep a lot of personalities in sync. There’s no question the Padres have the talent to win the NL West, even a World Series title is possible. The Fernando Tatīs Jr. injury creates a bigger separation from the Dodgers in the projected MLB standings, but he’ll be back by July. We do like the Sean Manaea addition, it solidifies one of the best rotations in baseball. The one thing missing is another quality outfielder to fill out the lineup.

As for the Rockies and Diamondbacks, there isn’t much to say. Arizona is avoiding a total rebuild and the Ketel Marte extensions signals he won’t be moved. Unfortunately, the starting rotation and lineup aren’t remotely good enough to even challenge for 72 wins. As for Colorado, signing Kris Bryant feels like a move for ticket sales as this is still one of the worst teams in MLB.

A starting rotation with two Cy Young candidates (Corbin Burnes, Brandon Woodruff), an All-Star No. 3 (Freddy Peralta) and a potential Rookie of the year candidate (Aaron Ashby). Pair that with a strong bullpen and a productive lineup. That’s everything the Milwaukee Brewers already bring to the table. It makes them the team to beat in the NL Central, especially if Christian Yelich rebounds and Kolten Wong stays healthy. Watch out, Milwaukee is a darkhorse World Series threat.

The St. Louis Cardinals strengthened their rotation depth this offseason, signing Steven Matz. Pitching depth will be crucial because of the compressed training period before the regular season starts. Factoring in that advantage along with an electrifying Cardinals’ bullpen, elite defense and a sufficient lineup, we expect St. Louis in a Wild Card Game. If Jack Flaherty is unavailable for a majority of the season, though, that significantly changes the Cardinals’ outcome.

We’ll give credit to the Chicago Cubs for not tearing everything down and beginning a total rebuild. The moves made this offseason ensure this team will be competitive, maybe even enough to play in October under a 14-team playoff format. Compared to the Brewers and Cardinals, the Cubs don’t stack up and that’s even after signing outfielder Seiya Suzuki. We’d also feel comfortable projecting a Willson Contreras trade in our MLB predictions, coming in July.

Considering the Cincinnati Reds are shopping their starting pitchers and trimming payroll, they belong in the “ignore” tier for the 2022 season. They’ll be better than the Pittsburgh Pirates, but at least we can say we like the outlook for Pittsburgh’s future.

The Atlanta Braves surprised everyone by winning the World Series. Even more surprising, potentially letting Freddie Freeman walk in free agency. Atlanta can erase some of our concerns by acquiring Matt Olson. Sure enough, that’s exactly what they did. With the money saved by choosing Olson over Freddie Freeman, Atlanta signed Kenley Jansen and Collin McHugh. That’s enough to push them ahead of New York in our MLB predictions.

The Philadelphia Phillies committed to spending money this offseason, improving the lineup with Kyle Schwarber and Nick Castellanos. That’s two huge additions, creating a lineup that should be among the NL leaders in home runs and RBI. We’d be even higher on this team because of its exciting rotation, if not for the fact Philly’s defense is the worst in baseball. It might not matter right now, but it will cost them multiple games and potentially a playoff spot. At least they have one of the best MLB lineups. 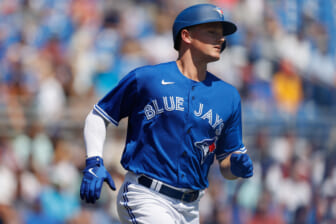 Disappointment in 2021 compelled the New York Mets to spend even more money this offseason. The results, Marcus Stroman being replaced by Max Scherzer and holes in the lineup being filled by Starling Marte, Mark Canha and Eduardo Escobar. We felt great about New York’s rotation trio and even liked some of the depth behind it. Unfortunately, the Jacob deGrom injury is a massive blow. Sidelined until June, in a best-case scenario, that wipes out multiple wins in our MLB predictions. It also highlights the risk of a starting rotation with so many durability worries.

Derek Jeter left the Miami Marlins for a reason, he doesn’t believe this team is all-in on winnings. Because of a below-average lineup, on its best days, the Marlins’ exciting rotation will be wasted. As for the Washington Nationals, the greatest hitter in MLB (Juan Soto) can’t fix their rotation, bullpen nor take multiple spots in the batting order.

Putting the Houston Astros atop the AL West in our MLB predictions today was easy. Justin Verlander is back and we’re expecting healthy seasons out of Kyle Tucker, Yordan Alvarez and Alex Bregman. Losing Carlos Correa hurts, it’s why we’re not projecting the Astros to win the AL pennant, but there’s a real gap between Houston and its competition in the division.

Can the Los Angeles Angels avoid bad fortune? If the snake-bitten franchise gets full seasons from Anthony Rendon, Mike Trout, Shohei Ohtani and Noah Syndergaard, it’s a no-doubt playoff team. The bullpen and rotation are stronger than last season and the lineup will be productive. It will all come down to how many IL stints the Angels’ stars have in 2022. For now, with everyone healthy, this looks like a Wild Card team that doesn’t reach the ALDS.

The Seattle Mariners will win the AL West, just not this year. Jarred Kelenic still needs to make a lot of strides. Julio Rodriguez, who earned a spot on the MLB roster, can win Rookie of the year and make a significant 2022 impact. We also like the move to acquire both Jesse Winker and Eugenio Suarez. However, the starting rotation just doesn’t seem good enough in a long season.

We’re seeing the Texas Rangers and Oakland Athletics head in opposite directions. Texans spent heavily on Corey Seager and Marcus Semien, adding two All-Star hitters to the lineup. However, its outfield will be problematic and the starting rotation is even worse. Until those issues are addressed, even a .500 record feels unlikely.

As for Oakland, it already traded Chris Bassitt, Matt Olson and Matt Chapman. With Sean Manaea also gone, it’s even easier to predict fewer wins. Ultimately, this is a total rebuild and the organization isn’t thinking about the final MLB standings in 2022.

The Chicago White Sox can start looking at designs for their 2022 AL Central champions shirts and hats. Carlos Rodon is gone, but Michael Kopech is waiting in the wings to take over as the No. 5 starter. Not only is Chicago’s rotation among the best in the AL, its lineup is also outstanding. Luis Robert is a darkhorse MVP candidate, Jose Abreu is consistent and there is even more All-Star talent (Eloy Jimenez, Yasmani Grandal, Tim Anderson).

Replacing set-up man Craig Kimbrel with outfielder A.J. Pollock is a net win, given Chicago’s needs, but the Garrett Crochet injury (Tommy John surgery) is a huge blow. Even worse, Lance Lynn is now sidelined until June. Chicago still finishes atop the AL Central in our MLB predictions, but the separation is decreasing. 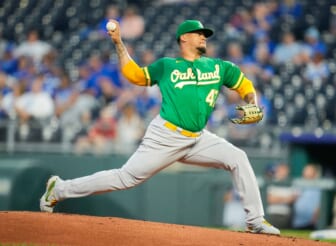 The Minnesota Twins are an interesting case. Acquiring Sonny Gray improves the rotation, but it could still use a front-line starter. Landing Carlos Correa is a monumental upgrade at shortstop, improving this team’s fielding and run production. However, there is room for improvement in the outfield and we’d really want to see a No. 2 starter acquired before being more optimistic with our MLB predictions. With that said, adding Chris Archer is a nice low-risk, high-reward move that should add more stability to Minnesota’s pitching staff.

Payroll is the one thing keeping the Cleveland Guardians from putting up a great fight against Chicago. Jose Ramirez can win an MVP, Franmil Reyes is capable of a .800-plus OPS and Myles Straw is an exciting talent. We also like Cleveland’s pitching. There just isn’t enough talent around Reyes and Ramirez to make this a playoff-caliber lineup and that will prove costly over a full season.

The rest of the AL Central is largely thinking about the future. The Detroit Tigers farm system leads us to believe they are a future World Series contender, but the big leap isn’t coming until 2023. For now, we’ll be focused on development for the young pitchers and the eventual debuts of Spencer Torkelson and Riley Greene.

As for the Royals, 2022 is centered Bobby Witt Jr. and MJ Melendez. Witt Jr. could be the future face of MLB and Melendez’s bat is convincing Kansas City to give the catching prospect a shot at other positions. We like the Zack Greinke return and have optimism for the Royals’ future, but 2022 won’t be great.

MLB predictions for the AL East are the most fun, they’ll even vary on a weekly basis. Toronto’s moves this offseason inspire confidence Canada might host a World Series game. Matt Chapman is one of the best defensive players in the game and his bat should look better with the talent around it. The rotation lost Robbie Ray but added Kevin Gausman and Yusei Kikuchi. As of now, this is the best team in the AL East.

Behind the Jays, it could go either way between the New York Yankees and Tampa Bay Rays. For now, we’ll keep the Yankees in the No. 2 spot. New York received good news with the restrictions on unvaccinated players being lifted. However, the Yankees’ lineup could be without 60% of its production whenever it plays in Toronto. Pair that with the injury concerns we have for multiple starters, it’s enough to put this team a tier behind the Blue Jays.

As for the Rays, the Wander Franco hype is real. He’s going to be one of the best players in MLB before long and some even think he’ll get MVP votes in 2022. If that happens, Tampa Bay is in business. The biggest thing we like about the Rays is their wealth of pitching, a crucial factor in a season where arms will be tested more than ever. Both of these teams will be in the playoffs, everyone’s preference between the two is understandable.

Needless to say, our MLB predictions aren’t quite as high on the Boston Red Sox. There are two MVP candidates in the lineup and the Trevor Story signing creates one of the best infield in MLB. However, pitching is a major concern. Boston’s bullpen isn’t among the best in the American League and its starting rotation lacks quality depth, especially with Chris Sale on IL. 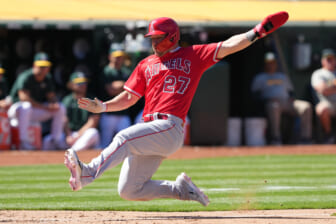