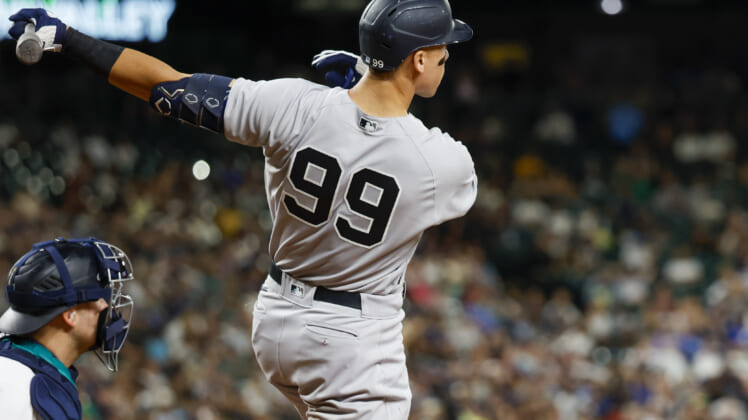 Major League Baseball is the only American professional sport that wards two MVP awards, one to each conference. It allows two players to take home a prestigious honor, joining some of the best players in MLB history with the coveted award on their trophy case.

Bookmark this page for updates on the MLB MVP race throughout the season, including the latest odds and analysis.

Here is Sportsnaut’s breakdown of the 2022 MLB MVP race so far. Each candidate is ranked based on a variety of factors. Those factors include stats, team performance, lineup factors and probability of the overall production being sustained.

MLB stats as of Wednesday, August 10

On pace to shatter the Roger Maris home run record (61), New York Yankees outfielder Aaron Judge is really starting to run away with AL MVP honors. He cooled off a bit at the plate early this summer, but he currently leads the American League in wRC+ (303), SLG (.956) and home runs (11) since the second half. Really, the only question is how many votes Judge wins by.

Reigning AL MVP Shohei Ohtani jumps ahead of Yordan Alvarez on our ballot this week, but the gap from Judge is still significant. There’s no denying that Ohtani is the most valuable player in all of baseball, he’s a Cy Young candidate who will also hit 30-plus homers. However, record and context matter. On a losing team under far less pressure to perform than Judge, that’s the difference here.

Houston Astros slugger Yordan Alvarez is enjoying a fantastic season. One of the best hitters in baseball, he is still hitting for power despite playing through a wrist issue right now. With that said, a .254/.395/.525 line since the All-Star Break is pushing Alvarez a lot further behind Judge in the MLB MVP race.

As the Boston Red Sox dip below .500, the odds for Rafael Devers even appearing in the top-three on AL MVP ballots diminishes. He’s enjoying a phenomenal season and he might be receiving a little more buzz if the players around him could deliver. Ultimately, this should just be remembered as the year Devers became a superstar.

MLB stats as of Wednesday, August 10

Nolan Arenado surges past his teammate in the NL MVP race. The All-Star third baseman was already one of the best defenders in baseball, maintaining that historic level of greatness even into his 30s. Since the All-Star Break, though, Arenado is slashing .347/.429/.714 with a 214 wRC+ and that pushes him past Paul Goldschmidt.

The battle for MVP honors could really come down to the wire between two teammates. Offensively, Goldschmidt’s numbers are superior to his fellow Cardinal this season. It’s also not like he is struggling at the dish, boasting a .319/.411/.745 slash since the ASB. Ultimately, the nod goes to Arenado because of the value he adds defensively.

Austin Riley recently tied Hank Aaron’s franchise record for the fastest player to reach 30 doubles and 30 home runs in a season. It’s a credit to Riley, who is once again transforming himself into a perennial MLB MVP candidate. Since June 1, the Atlanta Braves star holds a .333/.385/.671 slash line with 18 home runs, 49 RBI and a 186 wRC+

There’s a strong case to be made for several players on the ballot. Freddie Freeman is leading the best team in baseball and that’s certainly going to earn him a few more MVP votes. In addition, the 2020 NL MVP ranks third in FanGraphs WAR. Ultimately, this comes down to those above him just performing at a higher level as of late.

Check below for our evaluation of the MLB MVP predictions and race heading into the season.

MLB MVP odds 2022: Who will win Most Valuable Player?

Who will win MLB MVP in 2022? We look at the latest odds from BetMGM, looking at the top candidates who could win the AL and NL MVP awards this season. While he’s not quite as elite in that spot defensively, he still earned a 3.2 Defensive rating from FanGraphs with three Defensive Runs Saved in 211 innings. On top of the defensive value, Edman is the best base runner in MLB and he’s outstanding atop the lineup. Combine the defense, versatility, base-running impact and offensive production together, it gives you an MVP candidate.

When is MLB MVP announced?

MLB announced the 2021 AL and NL MVP recipients on Thursday, Nov. 19, 2021. An official announcement date for the 2022 MLB awards isn’t determined as of March, but the expectation is both MLB MVP awards will be handed out in November.

Here are some of the past MLB MVP winners.