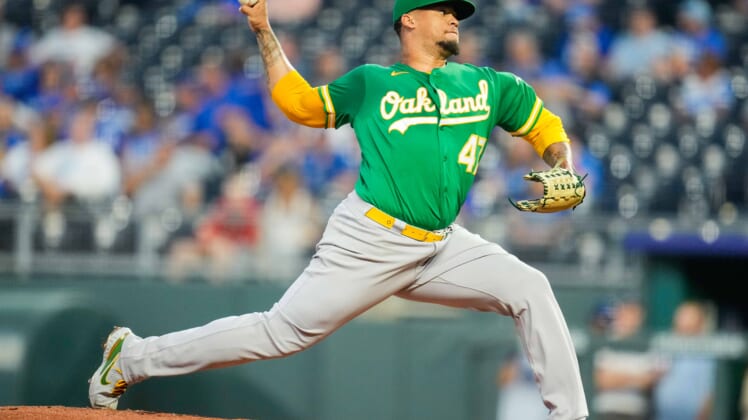 The Chicago White Sox starting rotation suffered a massive blow with the Lance Lynn injury, losing their co-ace until June due to a tendon tear. Even before Chicago learned of the news, though, the front office wanted to improve its pitching staff.

We’ve already seen multiple starting pitchers moved in 2022, with Sean Manaea traded to the San Diego Padres, Chris Bassitt joining the New York Mets and Sonny Gray dealt to the Minnesota Twins. It shouldn’t come as a surprise that Chicago checked in with each of those clubs.

The Lynn injury changes things. Entering his age-35 season, the righty won’t even be able to throw off a mound until May. He’ll then need time to work his arm strength back up, requiring multiple rehab assignments to tolerate a higher pitch count. In a compressed season with a shortened spring training, the organization will need to watch innings and usage.

Keeping that in mind, let’s examine three starting pitchers the Chicago White Sox should look into.

It starts at the top with a pitcher the White Sox know pretty well. Frankie Montas joined the organization in 2013, pitching in the minor leagues from 2013’15 with a brief taste of the majors. Ultimately, Chicago traded him to the Los Angeles Dodgers in a package for Todd Frazier. Years later, Montas is the ace of the Athletics’ rotation.

While Montas served an 80-game suspension in 2019 for performance-enhancing drug use, he’s turned things around. It took some time upon his return, posting a 5.60 ERA in 2020 with a 15.6% K-BB rate. However, everything came together this past season.

We saw the best version of Montas in his final 17 starts. He recorded a 2.24 ERA, 2.92 FIP and posted a stellar 28.9% strikeout rate. On top of that, Montas posted the third-highest Swinging Strike rate (15.4%) among all starters after the All-Star Break. The stuff is legit for a front-line starter and he’s under contract for two seasons. As for the potential cost, here’s one hypothetical trade.

The Chicago White Sox farm system might limit their options, especially this time of year. Moving further down the potential list of targets, San Diego Padres pitcher Chris Paddack offers intriguing upside for an organization with a solid track record.

San Diego’s wealth of pitching makes Paddack expendable. There are also multiple other needs on the roster that need to be addressed. While trades between MLB postseason contenders are rare, there could be a fit here.

Paddack is just a few years removed from being one of the top MLB prospects. He rated as the 34th-best prospect by MLB Pipeline in 2019, viewed as a starter with the stuff to one day become a front-line starter. With quality command and two ‘plus’ pitches (fastball, changeup), things looked promising early.

Across his first 140.2 innings, the 6-foot-5 righty posted a stellar 3.33 ERA with a 26.9% strikeout rate and only a .202 batting average allowed in his rookie season. Unfortunately, the past two years have seen things unravel for the 26-year-old.

As Ken Rosenthal and Dennis Lin detailed, though, many around the game seem to believe Paddack’s struggles reflect more upon the Padres’ pitching development. Chicago’s work with Dylan Cease, Carlos Rodón and many others in recent years could make this a nice reclamation trade.

The Los Angeles Dodgers signed Tyler Anderson to provide depth for their starting rotation. He’s now expected to work out of the bullpen, making him a potential starting pitcher the White Sox could target for a cheap acquisition.

He’s nothing more than a back-end starter, but Chicago needs arms who can eat innings. The 32-year-old southpaw made 31 starts for the Seattle Mariners and Pittsburgh Pirates in 2021, compiling a 4.53 ERA with a 1.25 HWIP and a .256 batting average allowed across 167 innings.

Anderson certainly wouldn’t be the marquee name baseball fans in Chicago likely want. However, this is still a veteran lefty who generated a strong 11.5% swinging-strike rate in 2021 and he walked just 5.4% of batters faced. Those are quality numbers for a fifth starter on a playoff-caliber team. Best of all, it wouldn’t cost much to get him from the Dodgers.