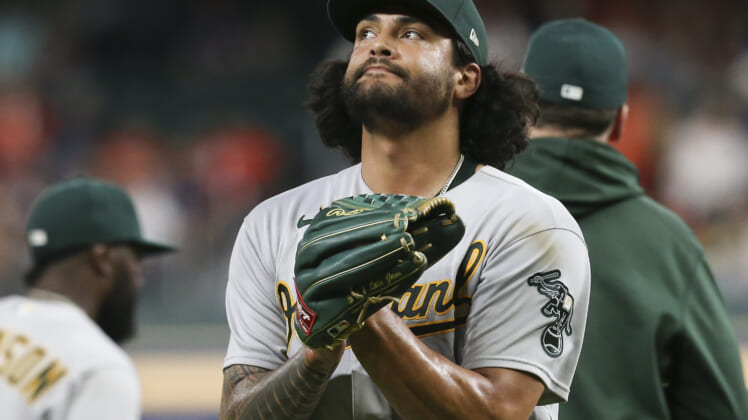 The Oakland Athletics are trading starting pitcher Sean Manaea to the San Diego Padres in a four-player swap just days ahead of Opening Day.

Just shy of Opening Day on April 8, the Athletics are now trading one of their most impactful starters to the Padres.

MLB insider Mak Feinsand first reported the trade, with Oakland receiving a pair of prospects in the deal from San Diego.

Manaea is scheduled to earn $9.75 million this season in his final year of arbitration. The 30-year-old southpaw will be a free agent next offseason.

Manaea, a co-ace in the Athletics’ rotation, figures to become a back-end starter in a deeper Padres’ pitching staff.

A second-round pick in the 2013 MLB Draft, Manea has pitched line a front-line starter when healthy. However, durability has been an issue at times. He underwent arthroscopic surgery on his left shoulder in 2019 and has only thrown 170-plus innings in a single season.

San Diego could be an ideal situation for the 6-foot-5 lefty. Moving towards the back of a rotation will reduce the workload put on his arm. The Padres also have a deep bullpen with multiple pitchers capable of covering multiple innings.

Before acquiring Manaea, San Diego likely would have relied on Nick Martinez as its fifth starter to begin the season. The 31-year-old joined the team after playing in Japan from 2018-’21. Across 415.1 innings in the majors, Martinez has a 4.77 ERA.

In a 162-game season with pitchers given less time to build their arm strength up due to the MLB lockout, depth will prove crucial in 2022. It’s one thing the Padres certainly won’t lack and their current rotation is certainly one of the best in MLB right now.

As for the cost, it was relatively cheap. Martinez, a right-handed pitcher ranked as San Diego’s No. 26 prospect by MLB Pipeline. Euribiel Angeles is a 19-year-old infielder who entered the year ranked as the Padres’ No. 12 prospect.