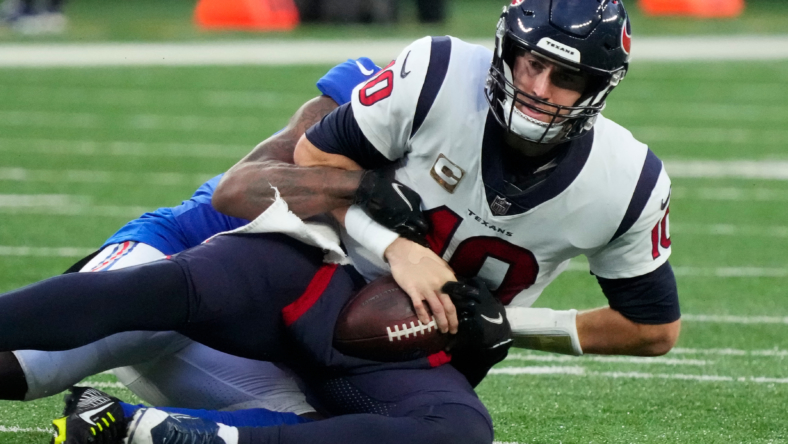 The Houston Texans head into Week 12 with a league-worst 1-8-1 record. They have lost five consecutive games and rank 30th in points scored. Second-year quarterback Davis Mills looks to be nothing more than a backup at this point in his career.

While things are not looking great on the field for this team, it is set up well to add a plethora of talent in the 2023 NFL Draft. As of right now, Houston would boast the No. 1 pick in the annual event next April. It also has the Cleveland Browns first-round pick from the Deshaun Watson trade (currently seventh overall).

Given that the quarterback class is seen as absolutely loaded in 2023, there’s every reason to believe general manager Nick Caserio and Co. will add a potential franchise player at that position next spring. There’s really no reason to evaluate Mills any more. He’s not the answer. He’s not the long-term solution.

The Davis Mills backdrop for the Houston Texans

Mills is coming off a Week 11 outing against the Washington Commanders in which he completed 19-of-33 passes for 169 yards with zero passing touchdowns and two interceptions. Over the course of the past five games (all losses), he’s been a mistake waiting to happen.

Assuming both Caserio and first-year head coach Lovie Smith return for the 2023 season, the pair will want to find that next quarterback to replace Mills under center.

This is still a talented young team. It has the assets to improve leaps and bounds in the offseason with the right moves. Whether it’s bringing in a veteran to go with a rookie or simply starting a Year 1 guy, there’s options at quarterback for the Texans. Below, we look at four of them.

We already know that Caserio has a built-in relationship with Garoppolo. He was part of the New England Patriots’ decision-making process when they selected Garoppolo in the second round of the 2014 NFL Draft to be the eventual heir-apparent to Tom Brady.

In fact, Caserio joined head coach Bill Belichick in pushing back against trading Garoppolo midway through the 2017 campaign before they were overruled by owner Robert Kraft. Long story short, there’s a real relationship here. It also must be noted that Garoppolo, an impending free agent, can be seen as a stopgap option in Houston.

In this scenario, Houston uses the No. 1 pick on a player at another position. That includes potentially adding to a talented young defense by going after Alabama edge guy Will Anderson. A likely franchise left tackle in Peter Skoronski to eventually replace Laremy Tunsil could make sense. In the process, these Texans then add Kentucky QB Will Levis or Spencer Rattler from South Carolina with the pick they acquired from Cleveland for Watson.

Houston will have a ton of different options and avenues to pursue in the 2023 NFL Draft. In addition to Cleveland’s first-rounder, the team has its own high second-round selection. It also boasts two third-rounders and a total of four sixth-round selections. This will give Caserio and Co. ample opportunities to move up and down the board.

In this scenario, the Texans eye either the aforementioned Levis or Ohio State star signal caller C.J. Stroud in a move up from Cleveland’s original pick while going another position with the No. 1 overall selection. The Texans could also technically trade out of the first selection to a bit further down in the top-five, adding more future draft capital to the mix. This would still give them two top-10 picks with more assets to work with as the organization looks to become relevant once again. So many options here.

While those two scenarios listed above are fun, there’s a chance that Houston simply opts to stand pat and goes with a quarterback in Bryce Young who many view as the top player in the entire 2023 NFL Draft. The reigning Heisman winner has seen somewhat of a downtick in production from the 2021 campaign, but he’s still performing at a high level for the Crimson Tide.

Acquiring someone of Young’s ilk with the No. 1 overall pick could help expedite Houston’s rebuild. Perhaps, the team signs a stopgap option like Garoppolo or another veteran to hold down the fort for another season. This scenario would also enable the Texans to use its other first-round pick to build up talent around Young.

Related: Houston Texans defense has a chance to set new NFL record, in a bad way

Team pulls off blockbuster trade for a quarterback

Let’s be clear here. Houston is nowhere near contention right now. With that said, the team has several nice building blocks. First-year running back Dameon Pierce is a top-end NFL Offensive Rookie of the Year candidate. Wide receiver Nico Collins has displayed flashes. Laremy Tunsil is one of the best left tackles in the game. Rookies Derek Stingley Jr. and Jalen Pitre lead what is a talented young defense.

Perhaps, the Texans use their draft capital to pull off a trade for a proven quarterback on the market. After all, we saw the likes of Russell Wilson, Deshaun Watson, Matt Ryan and Carson Wentz all dealt last offseason.

It’s pure conjecture here. But someone likes Jared Goff or Derek Carr could be made available. If the Texans played their cards right with their ample cap room and draft assets, they could build up an instant winner. It’s all about what the front office wants to do.