The Chicago Bears have fired Matt Nagy, a move that everyone expected for months. With the change finally official, the Bears coaching search is underway.

In 2018, the Bears were one missed field goal away from heading to its first NFC Championship Game since 2010. Although it wasn’t Nagy kicking, his decision to retain Cody Parkey despite inefficiencies represent his coaching faults. 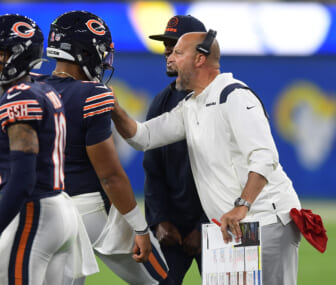 There’s going to be a theme here. That includes Chicago hiring another offensive-minded head coach to replace Matt Nagy. After exhausting multiple first-round picks on young quarterback Justin Fields, that has to be the focus for the Bears’ brass.

Hackett, 42, has extensive experience as a play-caller in both college football and the NFL That includes serving as the offensive coordinator with the Buffalo Bills, Jacksonville Jaguars and his current Green Bay Packers squad. He’s worked with the likes of Ryan Fitzpatrick, Blake Bortles and Aaron Rodgers. Talk about your array of quarterbacks. It could also help Fields to install a Kyle Shanahan-type system moving forward.

Immediately, a feasible coaching candidate for the Bears would be Brian Daboll. The Buffalo Bills offensive coordinator has proven his craft at every level of football. Daboll has been on the coaching staff of five Super Bowl-winning teams. He was also the offensive coordinator and quarterbacks coach for Alabama when the Crimson Tide won the College Football Playoff (2017).

Daboll’s influence on the success of Bills’ quarterback Josh Allen is evident. Last season, Allen threw for at least 300 yards nine times. Daboll offers a pass-heavy scheme with down-field targets and yards after the catch.

Daboll may be the key to helping Fields unlock his Russell Wilson potential. He creates a healthy diet of the run game into Buffalo’s menacing offense. However, the Bears will not be the only team that has Daboll on its radar this offseason.

Last spring, Moore was in consideration for the Eagles’ coaching vacancy, but experience may have been a reason why he was overlooked.

In particular, Dak Prescott has taken large steps forward while working with Moore. To be clear, the talent has been present on the Dallas sideline over the past few seasons. Perhaps Moore’s maturity and increased experience have played a role in the relentless, well-balanced Dallas offense.

Although one successful season does not necessarily equal a promotion, Moore’s potential shimmers and very well could be an NFL head coach over the next three seasons. Similar to his relationship with Prescott, could Moore ignite the best in Justin Fields? Remember, Bengals’ head coach Zac Taylor spent just one season as a quarterbacks coach before taking over in Cincinnati.

Andy Reid has a lot of branches on his coaching tree. Soon enough, another sector may flourish. Eric Bieniemy has been primed to lead an NFL team over the past three seasons. Critics claim Bieniemy to only be a “titleholder”, with Reid making many of the offensive decisions. However, if he was truly lacking contribution, Kansas City wouldn’t keep an offensive coordinator around just to fill a coaching roster spot.

One reason for keeping him from the head coaching club would be his questionable past. While at Colorado, Bieniemy was allegedly involved in an altercation at a bar after being called a racial slur. His license has also been suspended multiple times following driving infractions. Vance Joseph, who was also involved in a Colorado scandal, has been allotted a head coaching opportunity.

Do the Bears want to bring in a coach with a spotty past into a fiesta media circus that is Chicago? It’s at their discretion.

Ultimately, it’s been over 20 years since Bieniemy has acted inappropriately and has maintained the utmost integrity throughout his coaching career.

The one red flag of a Bieniemy hiring would be Chicago repeating its process of picking a coordinator from the Andy Reid tree. One thing is certain, it would’ve been intriguing to see how Patrick Mahomes‘ career would’ve unfolded with Matt Nagy calling plays in Kansas City.

Chicago previously sought out this Iowa State head coach to replace Nagy, all to no avail. Things could have very well be in a different situation right now given the crazy coaching changes we’ve seen around the college football world and the Cyclones’ lack of success this past regulare season (7-5 record).

There’s a reason NFL teams have had interest in the 42-year-old Campbell. He helped turn Toledo into a national brand before taking over as Iowa State’s head coach back in 2016. Since then, he’s posted a 42-33 record for a program that fell on hard times prior to his arrival. That included a Fiesta Bowl win following the 2020 season. If the Bears are indeed sold on an offensive-minded head coach to replace Matt Nagy, Campbell makes sense.