Could the Philadelphia Eagles swoop in and steal Kellen Moore from the NFC East rival Cowboys? Philadelphia is requesting to interview Dallas' play-caller. 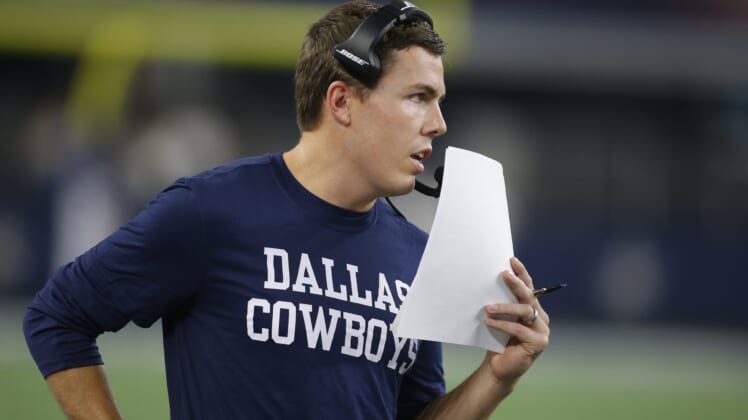 The Philadelphia Eagles may wind up stealing one of their division’s most prized assistants, as they’ve submitted a request to interview Dallas Cowboys offensive coordinator Kellen Moore for their head coaching vacancy.

Moore has been calling plays for Dallas since 2019 and produced magnificent results with Dak Prescott at quarterback. He even helped the unit stay productive well into 2020 when Andy Dalton was pressed into duty.

Reporter Nick Eatman cited multiple reports in posting the news on the Cowboys’ official website, which has to have fans of America’s Team at least a little flustered.

According to the report, NFL rules dictate that coaches must be allowed to interview for roles that are considered promotions. Moore, who just agreed to a three-year contract extension, would obviously be making a big move if he were to take the head coaching job, and it’s fascinating that the 32-year-old’s name hasn’t popped up in connection to other NFL vacancies.

While there’s still a chance Moore could decline the Eagles’ interview request, if he does wind up talking to them, it could be telling as to what the situation is like in Dallas right now.

Would Kellen Moore bail on Cowboys for Philadelphia Eagles?

To say the first season for head coach Mike McCarthy was disappointing would be a colossal understatement. Despite having a chance to win the NFC East in Week 17, Dallas still posted a 6-10 record in 2020, which gives the team a top-10 pick in the 2021 NFL Draft, which should be used to upgrade the maligned defense.

But while former Falcons head coach Dan Quinn should be an upgrade over fired defensive coordinator Mike Nolan, the Cowboys’ offense is already in major flux. Prescott’s future with the team hasn’t been decided, and owner/general manager Jerry Jones was reluctant to pay the signal-caller top money prior to this past season, much less truly commit to him.

With all that chaos going on in Dallas, it’s possible Moore could join an organization that won a Super Bowl just a few years ago and posted winning records in back-to-back seasons after that. On the other hand, Moore may feel a sense of loyalty to the Cowboys for giving him the keys to the offense at such a young age. Plus, if he’s really invested in the organization, he wouldn’t want to bail and join a division rival.

Taking the interview would be in Moore’s own self-interest, but it’s unlikely he’d be able to deftly discuss everything without revealing too much to the Eagles. Their decision to fire Doug Pederson in the first place, combined with a mess at quarterback between underperforming Carson Wentz and his young challenger Jalen Hurts, brings a ton of baggage with the Philly job as it is.

It’d be more surprising if Moore actually accepted the request to interview, and also not a great sign of what the outlook is for the Cowboys in 2021. Especially provided Prescott returns to Dallas, Moore is likely to stay put, considering in his first year calling the shots in 2019, the Cowboys led the NFL in total yards and ranked sixth in points per game.