The talk and the anticipation are almost over as the New York Giants will travel to Nashville to take on the Tennessee Titans to open their 2022 regular season campaign. This will be the first time we can truly assess what kind of team Big Blue will be this season under new head coach Brian Daboll.

As is with every game, you want to pay attention to every player and see how the team performs in all three phases of the game. But on Sunday, there are five players you need to closely observe because they’ll play a massive role in determining the outcome. Here are the five you have to watch on Sunday afternoon.

Daniel Jones make or break season begins with a tough first task against the Titans. Last season Tennessee held their opponents to 20.8 points per game which tied for fifth best in the league. Although Tennessee will be without their leading sack artist from a season ago in Harold Landry, they still have plenty of playmakers on defense led by two-time All-Pro safety Kevin Byard.

This will be the first time we can truly assess how quickly Jones has a grasp of the offense that Daboll and offensive coordinator Mike Kafka have installed. They want Jones to get the ball into his playmakers’ hands both on intermediate and deep passes and above all else, avoid making costly mistakes.

A great showing by Daniel Jones on Sunday could be a sign of things to come and instill confidence in him and the offense. If he has a subpar performance, then it could mark the beginning of the end of his time in New York.

Now that we’re in the regular season, the New York Giants will open up their playbook which means get the ball into Barkley’s hands any way possible.

Throughout training camp, the Giants had Barkley lined up all across the field so that they can get the ball to him in space and great mismatches. The star running back looked quick, elusive, and ran with power throughout the summer, now it’s time to see if he can do it when it matters most. Barkley will be the focal point of New York’s offense not just on Sunday but for the entire season, and they will need for him to have over 100 all-purpose yards if they’re going to pull off the upset.

The Titans live and die with their power running game which is spearheaded by Derrick Henry. Slowing down the 6’3 247 pound Henry was going to be a tall task for Big Blue, and that task became more challenging following the release of Blake Martinez last week.

The onus of trying to contain Henry will be placed upon Tae Crowder and Austin Calitro are is the starting inside linebackers on New York’s unofficial depth chart. Releasing Martinez was a surprise move by the Giants since he led the team in tackles in 2020 with 151, and because New York’s first three opponents feature star running backs. 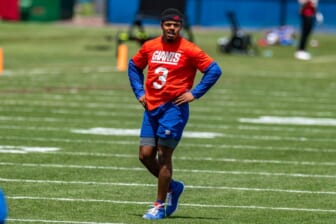 Crowder started all 17 games last season and would wind up leading the team in tackles (130) in large part to Martinez being lost for the season in Week 3 with a torn ACL. Calitro has started nine games during his four-year career and will be making his Giants debut on Sunday.

Expect Henry to get over 20 carries, and when he’s not in the game, Tennessee will still try to pound the ball with backup running backs Dontrell Hilliard and Hassan Haskins. If Crowder and Calitro are overwhelmed by the Titans’ ground game, it will be a long day for the Giants.

In today’s NFL, it’s imperative to have a number one wide receiver that can win one on one matchups, and become a dependable target that your quarterback can rely on. Kadarius Toney is that person for the Giants.

Toney has dealt with lower leg issues during the summer, but after looking good at Tuesday’s practice, the second-year wide receiver seems good to go. The Titans have two young corners that are on top of their depth chart in Kristian Fulton who’s entering his third season, and rookie Roger McCreary. 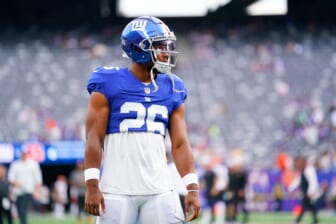 Look for the Giants to try to take advantage of the rookie by having Toney do double moves and take chances with him down the field. Across the league, people are expecting Toney to have a breakout season if he can remain healthy. Sunday will be his first opportunity to prove that he is a legit number one receiver.