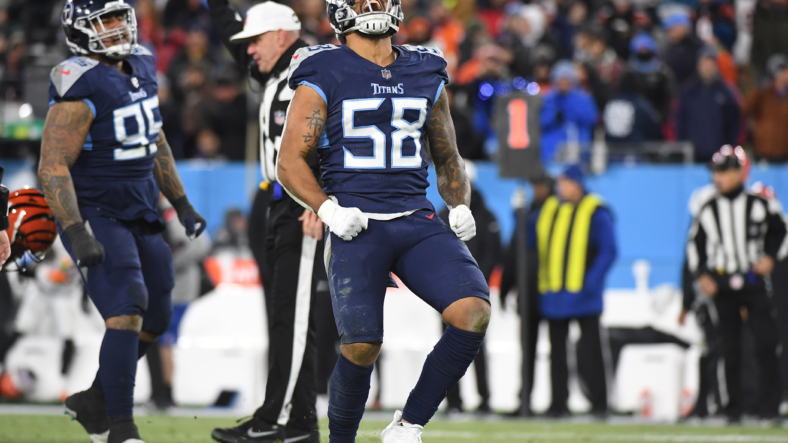 The Tennessee Titans may have escaped the preseason relatively healthy, but on Wednesday with just over a week before they kick off their regular season, the franchise received a big blow. Pro Bowl linebacker, and their top pass rusher, Harold Landry suffered a torn ACL, the team announced on Thursday. This means Landry will miss the entire season.

Landry had just signed a five-year, $87.5 million contract back in March, a deal that doesn’t kick in until 2023. While the Titans and Landry are happy to not have to worry about the long-term future, his immediate loss is a major concern. This is a defense that ranked 10th in the NFL in sacks per game, with Landry leading the way with 12.5.

In other words, Mike Vrabel’s defense will have to get creative as they look to replace the 26-year-old Landry’s sack production. While they’re surely scheming something in Nashville, here are three potential solutions to address their sudden need for a top pass-rusher.

If coach Vrabel doesn’t want to mess around with inexperience, the team could look to the free agency pile, where former Pro Bowl edge rusher Dee Ford remains without a contract. The only issue is, Ford may not be too reliable either. He’s battled neck and back issues for the past two seasons and has been able to suit up in just seven contests.

While Ford has tallied 40 sacks in his career, adding the 31-year-old on may not be a safe solution, even if he knows how to get after quarterbacks. But, if he’s healthy, and wants to play another season, the Titans could do a lot worse as they look to create more pressure off the edge.

Another player who NFL fans know all too well is former New York Giants and Tampa Bay Buccaneers pass rusher Jason Pierre-Paul. The 33-year-old two-time Super Bowl winner is also waiting for a call in free agency before the regular season begins. Like Ford, JPP didn’t make it through a full season in 2021, suiting up for 12 contests. He totaled just 2.5 sacks despite playing in 74% of the team’s defensive snaps.

Yet, in 2020 Pierre-Paul still managed to rack up 9.5 sacks with the Bucs. It’s possible he simply had a down season in Tampa. The Titans shouldn’t hesitate to at least give the three-time Pro Bowl rusher a look. But if the Titans don’t want to gamble too much on their season, the next name on our list might be their best bet.

The Chicago Bears have maintained their stance all along; They don’t want to trade Pro Bowl pass rusher Robert Quinn. Why would any team want to trade a player who ranked second in the NFL with 18.5 sacks a season ago? Most teams wouldn’t.

Yet, most teams are also heading into the 2022 season with higher expectations than ‘Da Bears have. Quinn is also a three-time Pro Bowl player and is 32 years old. He’s never won a Super Bowl and likely sees the writing on the wall. Before his days of being elite are done, Quinn likely wants a ring on his finger. Of course, that’s not guaranteed should he join the Titans, he would help improve their chances. For both Quinn and Tennessee, it’s a match made in heaven.

Trading Quinn would clear $12.9 million off Chicago’s books (not that they’ll use it or need it in 2022). The bigger question is how much he’d cost to trade for. Since he’s on the wrong side of 30 yet is also under contract for two more seasons as a reasonable rate, the Bears won’t get a haul for the aging vet, but a Day 2 selection, or early Day 3 draft pick shouldn’t be out of the question. Though, replacing your starting defensive end, and top pass rusher with just over a week before the games begin would be a tougher challenge. One the Titans are faced with right now.

The Titans may already have Landry’s replacement on the roster with 2021 fourth-round pick Rashad Weaver. The 24-year-old edge rusher broke his leg as a rookie so he could only suit up for two games in his first season. Now he’ll be asked to possibly start unless Titans general manager Jon Robinson can find another veteran to pencil in before their Sept. 11 opener.

Weaver is another big body, at 6-foot-4, 259 pounds and had 17.5 sacks in his college career at Pittsburgh. The Titans clearly liked the prospect enough to take a flier on him a season ago but didn’t get to see much of Weaver before his injury wiped out his season. They’ve seen more of Weaver than anyone else has from training camp and other practice sessions. It’s possible Vrabel puts his second-year pro to the test over the next few days before the Titans determine how they want to proceed.