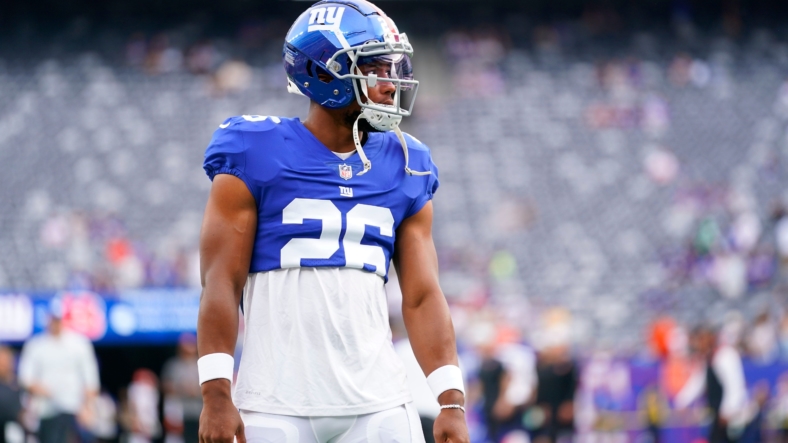 The New York Giants season is about to kick off with a Week 1 matchup against the Tennessee Titans that has fans excited about the things to come this fall and in the years ahead.

There are reasons to be excited about Big Blue coming into this season. Offensively, head coach Brian Daboll brings a new-look offense that is more innovative and will put players in the best possible position to succeed. In addition, free agency and the 2022 NFL Draft strengthened the roster with key additions made by first-year general manager Brandon Beane.

Expect to see a positive change from New York this season which could lead to some impressive feats, and the team doing better than anticipated in NFL predictions.

Here are five bold predictions for the New York Giants in 2022.

Saquon Barkley broke onto the scene as a rookie, erupting for 15 total touchdowns and 2,000 scrimmage yards in 16 games. It earned him Offensive Rookie of the Year and Pro Bowl honors. He followed that up with a productive 2019 season, but injuries have derailed him in the years since.

Barkley now says he’s fully healed, returning to the player we’ve seen before. He’ll be running behind an improved offensive line and working with a coaching staff that will get him the ball in open space. It leads us to our first bold prediction. Barkley will play in every game this season and eclipse 2,000 scrimmage yards.

With Barkley playing like one of the best players in the league again, don’t be shocked if New York offers him a new contract at the end of the season since they’ll have a ton of cap space next season.

Martindale’s defense is predicated on applying pressure to opposing quarterbacks early and often. Not only will New York improve on the 34 sacks they had a season ago, but two members of the defense will have double-digit sacks. The last time New York achieved this feat was back in 2010 when Osi Umenyiora and Justin Tuck each had 11.5 sacks.

The two likely candidates to pull this off will be Thibodeaux and Azeez Ojulari who will shaky off the injuries they sustained over the summer and become disruptive forces coming off the edge. Leonard Williams is another player that could wind up with at least 10 sacks on the season, in this aggressive scheme.

Everyone knows about Jones’s turnover issues and erratic play of his first three seasons in the league. This is why the top priority this season for Big Blue is to see if quarterback Daniel Jones can develop into an above-average starting quarterback.

For the first time in his career, Jones has a head coach in Daboll and an offensive coordinator in Mike Kafka who know how to create innovative offenses and they design game plans and plays with a quarterback’s strengths in mind. They’ll put Jones in positions to succeed and to get the ball out quickly to his playmakers. For his career, Jones has never completed 65% of his passes or had a QBR over 55.7.

All of this bodes well for Jones. He’ll be given more time to throw behind the improved offensive line, allowing him to take more chances vertically and helping reduce turnovers. We should also see this become a more efficient offense with New York’s playmakers turning quick throws into huge gains. Put all of that together and Jones can set career-highs across the board.

To say that Kadarius Toney’s first season in the NFL was a disappointment would be a huge understatement. The former Florida Gator appeared in 10 games and caught 39 passes for 420 yards and failed to reach the end zone.

This year things will be vastly different as Toney will be the focal point of the Giants passing game. Not only will he have a breakout season, but he will become the first Giant since Odell Beckham Jr in 2018 to have 1,000 receiving yards in a season, and have the most receiving yards of any receiver in the NFC East.

Normally being above 500 wouldn’t be considered a bold prediction for a team. But the last time New York had a winning record at any point in the season was back in 2016, which was also their last playoff appearance.

Since then, the franchise has a record 22-59 which includes losing the last five season openers. But this dubious streak will finally come to an end this season, and it could happen as early as Sunday against the Titans. Not only will Big Blue have a winning record, but they’ll be in contention to make a wildcard going into the season finale against the Eagles.