The Chicago Bears’ new brass has not necessarily taken to 2021 second-round pick Teven Jenkins. The young offensive lineman and former No. 39 overall pick is coming off an injury-plagued rookie campaign and has just been moved inside to guard from the offensive tackle spot.

This comes on the heels of reports that general manager Ryan Poles and Co. might very well opt to trade Jenkins rather than throw him out there in front of young quarterback Justin Fields.

Chicago’s offensive line was a disaster in front of Fields as a rookie. The new power duo of Poles and head coach Matt Eberflus are attempting to find the right mix heading into 2022. That included signing Riley Reiff to man the right tackle spot with Braxton Jones and Larry Borom competing on the other side. This could leave Teven Jenkins out in the cold.

Despite falling out of favor in Chicago, Jenkins is a mere 24 years old and less than 18 months removed from being hyped as a potential first-round pick in the 2021 NFL Draft. Teams will be interested if he does indeed hit the trade market. Here’s a look at four ideal destinations.

Mitchell Trubisky will likely open the season as Pittsburgh’s starting quarterback. However, there’s a darn good chance that Kenny Pickett will take over soon. The rookie first-round pick performed well in his preseason debut and is trending in the right direction.

At issue here is Pittsburgh’s questionable offensive tackle situation. Dan Moore Jr. is slated to start at left tackle with Chukwuma Okorafor on the right side. Moore started 16 games in front of Ben Roethlisberger as a rookie last season. According to Pro Football Focus, Moore posted a 57.8 grade — one of the worst marks for a regular starter in the NFL. Okorafor yielded just two sacks and could be the left tackle of the future. Adding a potential swing tackle or guard to the mix would help big time as Pittsburgh eventually moves on to the Pickett era.

Related: Trey Lance set up for success as the face of the San Francisco 49ers

San Francisco might have one of the best players in the game in that of left tackle Trent Williams. However, the rest of its offensive line is a major question mark ahead of young quarterback Trey Lance. There’s also some major depth issues at tackle given Mike McGlinchey’s injury issues and inconsistency on the other side of Williams.

If San Francisco wants Lance to succeed as a first-time starter, it will have to get a nice amount of protection for the youngster. While Teven Jenkins is unproven, his ability to play right tackle and guard would create more depth for head coach Kyle Shanahan and Co.

Pass protection was a major issue during the Russell Wilson era in Seattle. It’s one of the many reasons he wanted out of dodge and ultimately ended up with the Denver Broncos. Seattle attempted to rectify this by using one of the picks it acquired for Wilson on offensive tackle Charles Cross. He’s been an absolute disaster during the preseason.

With Abraham Lucas looking like a potential keeper, adding Jenkins to the mix could make sense. It would enable Seattle to move Lucas to left tackle for the time being with Cross either in a swing tackle role or Jenkins filling that spot. Either way, the Seahawks could use more depth. Why not take a chance on this former second-round pick? 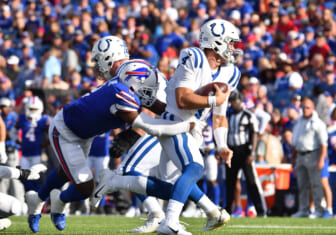 Also Read:
Indianapolis Colts might be planning for failure with Matt Pryor at left tackle

Indianapolis has decided to go all in after acquiring future Hall of Fame quarterback Matt Ryan in a trade with the Atlanta Falcons. Unfortunately, the offensive line remains a major issue for the Colts. Primarily, that’s the left tackle spot with Matt Pryor looking like nothing more than a pedestrian starter.

We’re not saying that Teven Jenkins can come in and man the blindside spot. Rather, he would add more depth at both the tackle and guard positions. The cost would be relatively cheap, giving general manager Chris Ballard and Co. more options.