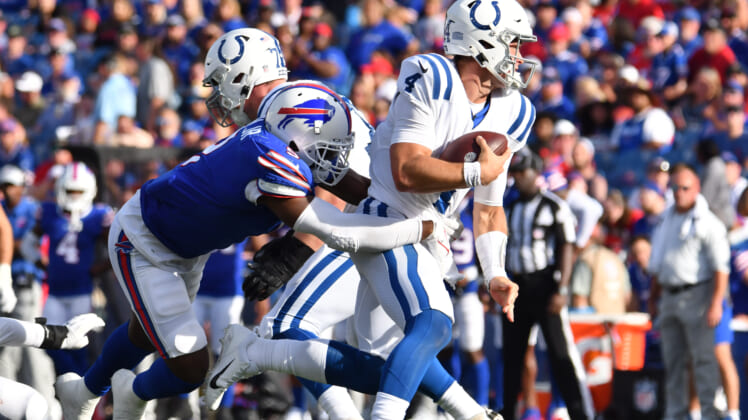 Well, that first preseason game didn’t go the way many had hoped or wanted. For those that missed it, the Indianapolis Colts lost to Buffalo 27-24 in essentially a walk-off field goal. Many thought that since the Colts would be playing their starters for the first quarter that it would lead to the team winning the game. Only, that’s not what happened.

Many fans expressed their anger and frustration when the team wasn’t winning the game early or by a lot. Well, it’s the preseason, so the games don’t count, and therefore the outcomes don’t really matter. What does matter is the play of both the players and the team, and the former is what brings us here today.

Indianapolis Colts’ plan at left tackle not working out

We’ve been told and shown, that the team believes in Matt Pryor as their starting left tackle. Super quick recap, the Colts didn’t sign or trade for any NFL left tackle. And they didn’t draft one until the third round. So, while many were skeptical of Pryor being the starter, after not being able to overtake a struggling Eric Fisher, the Colts let us know they know what they’re doing.

To be fair, last season Pryor did play 241 snaps without giving up a sack. Which was second in the entire NFL, only behind Eagles tackle Lane Johnson. Also, Carson Wentz was the Colts’ QB last season, and he liked to hold onto the ball. So, it makes that state even more impressive for Pryor. Well, this weekend’s game showed us that maybe they need to re-evaluate that plan.

It’s possible that Pryor may just not have had a very good game. It would be a bit hard to swallow that theory as he’s gone against Yannick Nagakoue all throughout camp. And he should be better than Buffalo’s backup. Or maybe Nagakoue isn’t that good and the Colts are in a big world of hurt. Or maybe, just maybe, it’s the first preseason game. So, let’s all chill the corn, as the expression goes.

Related: Indianapolis Colts fans should be rooting for kicker Jake Verity to shine in training camp

Regardless though, the performance of Colts’ plan A for left tackle does leave a lot to be desired. Or at least very concerned about it. So, if Pryor doesn’t work out, where does the team go next? Well, next up would be the afore-referenced rookie lineman, Bernhard Raimann.

Raimann did well in the first NFL-level game of his hopefully long career. Not great, but well. He at least showed that the Colts drafted a player who can perform at the NFL level. While that may not be a ringing or encouraging endorsement. It does mean that he shouldn’t be a bust like former Colts general manager Ryan Grigson did time and time again with his drafted linemen.

In the practicality of being pragmatic, who or what are the other options for a left tackle? If Pryor is Plan A and Raimann is Plan B. Who’s Plan rest of the alphabet? After Raimann, it would be Jordan Murray, then either Danny Pinter or Ryan Van Demark, and then probably some free agent or maybe another team’s camp casualty. After that, it could be moving Braden Smith over or the local afternoon radio show host’s idea of kicking Quenton Nelson out to left tackle.

Also, somewhere in that list is the option for a trade. There are three very important components to a successful NFL team. They are a quarterback (shocker I know), someone to protect his blind side, and then a premier pass rusher. This season the Colts finally have or should finally have all three. The last time they had all three was six years ago, which was Robert Mathis’ final season.

Again, this is just the first preseason game. There is still time for things to get better. It provided a learning opportunity for everyone. Now there is film that can be reviewed and problems that can be corrected. It was disheartening and a bit concerning to see Pryor’s performance. However, the thought should be that he can get better. Let’s just see how Pryor does during the rest of training camp and the preseason.