Despite starting in only two games during his debut season in the NFL, San Francisco 49ers quarterback prospect Trey Lance is a popular choice among bettors to win the MVP award in 2022.

While it was uncommon for much of the leagues history, young gun quarterbacks taking the NFL by storm an winning top awards has come en vogue. Before Green Bay Packers legend Aaron Rodgers snagged up back-to-back MVP honors the last two seasons, a couple of relative newbies won the award.

In 2018, Kansas City Chiefs franchise QB Patrick Holmes was the league’s most valuable talent in his second year, after starting only one game the year before. In 2019, Lamar Jackson followed suit by winning the NFL’s top honor in his second season after starting in just seven games the year prior.

Considering that, I guess it can’t be too much of a surprise that as Lance heads into his second season — and one where he is expected to start after the 49ers move Jimmy Garoppolo — that he is a popular pick with savvy sports bettors to win the MVP award in 2022.

On betting site BetMGM.com, the third overall pick in last year’s draft went from opening as an 80-to-1 favorite to now having a 66-to-1 chance of winning the MVP. He is currently the third most popular bet on the site to earn the award.

The 49ers have high hopes for Lance after trading two first-round and a third-round pick to the Miami Dolphins in 2021 to move from 12 to three to select the North Dakota alum.

After making the NFC Championship game last season, and with a belief that Lance should be an improvement on Garoppolo, the 49ers also have the second best odds of making it to the Super Bowl next season at +600. They only trail the biggest favorite in the Packers at +450. 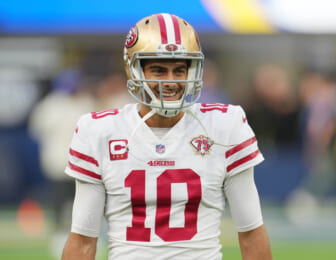 Also Read:
Indianapolis Colts will be ‘in the mix’ for Jimmy Garoppolo following Carson Wentz trade