Philadelphia Eagles path to perfect season: How Jalen Hurts and Co. can match the Dolphins 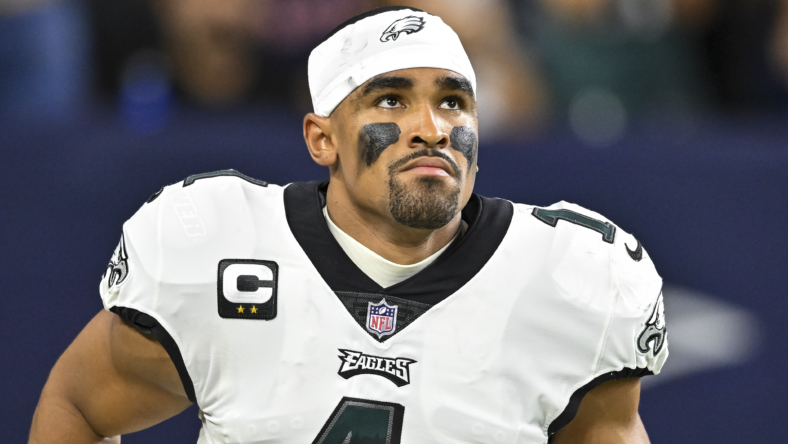 It’s that time of the season to talk about it. The next time Jalen Hurts and the Philadelphia Eagles take to the field will be Nov. 14 against the Washington Commanders.

Philadelphia will enter said game with an 8-0 record and roughly halfway to just the third perfect regular season in NFL history following Thursday’s 29-17 win over the lowly Houston Texans.

The Eagles’ Week 9 performance was not perfection. Hurts lost the team’s first fumble of the season. Meanwhile, Philadelphia’s top-tier defense enabled Davis Mills to complete 8-of-9 passes for 80 yards and two touchdowns in the first half alone.

With that said, it was the same story from the first seven games of the season. Hurts and the Eagles’ offense couldn’t be stopped. Meanwhile, Philadelphia’s secondary came up with a game-changing play on a C.J. Gardner-Johnson interception of Mills in the third quarter — leading directly to an Eagles touchdown and a 21-14 lead.

All of these pieces will have to come together in Philadelphia for the team to run off the first ever 17-0 record in the history of the National Football League and potentially match the 1972 Miami Dolphins as the only undefeated team in NFL history (no, the 2007 Patriots don’t count).

But there’s avenues to this happening. Below, we look at how the Eagles got here and why they can accomplish this feat.

Philadelphia Eagles’ 8-0 start to the season

Philadelphia started the season like gangbusters, scoring 24 second-quarter points against the Lions in Week 1. The team found itself up 38-21 after three quarters before seeing Detroit score 14 garbage-time touchdowns in the final stanza. Hurts started out his third season strong, completing 18-of-32 passes with 333 total yards and a touchdown.

In Week 2, these Eagles actually handed the Vikings their first (and only loss) of the season. It was at this point that we realized this team could be for real. Philly took a 24-7 halftime lead with neither team scoring a point in the final two quarters. It outgained the Vikes by north of 200 yards (486-264).

Week 3 was pretty much the same story. After a scoreless first quarter, the Eagles put up 24 points in the second stanza. Nick Sirianni’s squad outgained the division-rival Commanders by a margin of 252-21 in that second quarter.

Week 4’s outing against former Philadelphia Eagles head coach Doug Pederson and the Jacksonville Jaguars was a different story with this team falling down by the score of 14-0 after the first quarter. Like the Eagles have done all season, they dominated their opponent in the second quarter — outscoring the Jaguars by the margin of 20-0. In fact, the Eagles scored 29 unanswered points before a garbage-time Jags touchdown in the fourth quarter.

If a team is to go undefeated throughout the course of a season, it will need to win close games. That’s what we saw from Philadelphia in Week 5 as it took out the Arizona Cardinals, 20-17. Tied up late in the game, Philly’s offense responded to a Cardinals touchdown by driving down the field 70 yards on 17 plays in just under eight minutes for the game-winning field goal from kicker Cameron Dicker.

Taking on backup Cowboys quarterback Cooper Rush in Week 6, Philadelphia took advantage of three interecptions to come away with the 26-17 win. This game saw Hurts complete just 15-of-25 passes for 155 yards, a clear indication that the Eagles’ defense can do its thing to take over a game.

Speaking of taking over, Philadelphia forced two more turnovers against the Pittsburgh Steelers in Week 8 to win by the score of 35-13. Hurts returned to form, completing 19-of-28 passes for 285 yards with four touchdowns in the win.

Philadelphia does have a difficult stretch of three games against winning opponents during a four-week stretch. That includes outings against the division-rival Giants and Cowboys, both of whom find themselves at 6-2 on the campaign.

Though, the Eagles’ run to an 11-0 record seems to be relatively easy. Washington has won three consecutive games. But as we saw in Week 3, this team is in a different level than the Commanders. The Colts also don’t seem to be too much of a threat with Sam Ehlinger having taken over for Matt Ryan as their starting quarterback.

Meanwhile, the Packers have lost four consecutive games. Aaron Rodgers lacks the offensive weapons to take on the Eagles’ elite defense or match whits with what Jalen Hurts and Co. can do on offense.

It really starts Week 13 against a Titans team that has won five consecutive games after an 0-2 start to the campaign. Any team with Derrick Henry running the rock can keep a game close. That’s probably when we can start looking at the Eagles potentially losing a game.

Pretty much the same things that we have seen through the first eight games. Win the turnover battle and get continued great play from the defense.

Philadelphia has now forced 18 turnovers in eight games. It has turned the ball over just three times. We’re talking about a plus-15 turnover margin.

Then again, it’s all about Hurts continuing to make sweet music with the likes of A.J. Brown and DeVonta Smith while Miles Sanders continues to perform at a career-high clip in the backfield. If all of this happens, the Philadelphia Eagles have a real shot at a 17-0 mark when all is said and done.