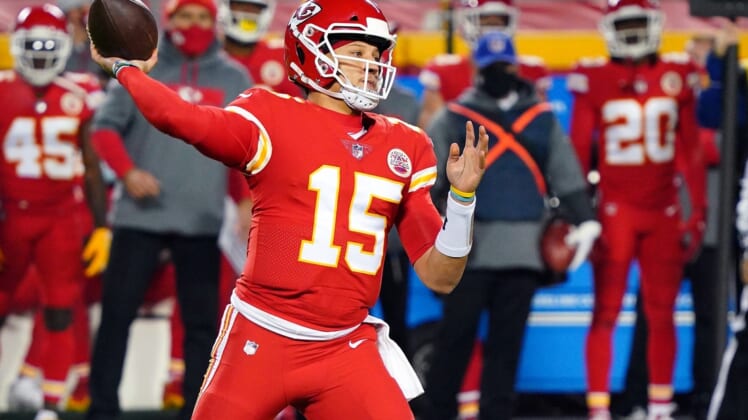 The NFL Week 15 slate promises to be pretty darn exciting. It starts with the Las Vegas Raiders battling for their playoff lives against the division-rival Chargers in Sin City.

After an intriguing three-game slate on Saturday, there’s a possible Super Bowl preview in the Bayou with the Saints hosting the defending champion Kansas City Chiefs the next day. Meanwhile, the surprising Cleveland Browns play a rare “Sunday Night Football” game against another surprising team in that of the New York Giants.

Here’s a look at the NFL Week 15 schedule with odds and point spreads for each of the 16 games.

Following its 23-15 win over San Francisco this past Sunday, Washington heads into Week 15 at 6-7 on the season and in first place in the NFC East. Ron Rivera’s squad has won four consecutive for the first time since early in the 2016 campaign. It also scored two defensive touchdowns and recorded four sacks in last week’s game. The moral of the story? Rookie Chase Young and Washington’s defense should feast on a Seahawks quarterback in Russell Wilson who has been sacked 40 times this season. At the very least, don’t take the Hawks and the points here.

Brutal. Absolutely brutal. That has to be the best way to describe Houston’s performance in its ugly 36-7 loss to the Chicago Bears last Sunday. The Texans’ defense gave up three Mitchell Trubisky touchdown passes without recording a single interception. Houston has now yielded 25 touchdowns against three picks through 13 games. It is also taking on a quarterback in Philip Rivers who has thrown 15 touchdowns and just three picks in his past seven starts after some early-season struggles to begin his Colts career. Indy at -7.0 seems safe as they win a third in a row in NFL Week 15.

Both the Bears and Vikings find themselves at 6-7 and one game out of the final playoff spot in the NFC heading into Week 15. This is pretty much a do-or-die game in the old black and blue division. However, the two teams are trending in completely opposite directions. Minnesota is coming off an ugly loss to the Buccaneers while the Bears ran roughshod over Houston. At this point in the season, momentum is everything. It’s in this that I am not too sure about Kirk Cousins and Co. at -3.0.

How bad has Cam Newton been for the Patriots since he returned from COVID-19? The former NFL MVP has thrown three touchdowns against eight interceptions in his past nine starts. He’s failed to complete double-digit passes three times while throwing for less than 100 yards three other times. As for the 8-5 Dolphins, they are coming off a hard-fought loss to the Kansas City Chiefs in a game that saw their defense record three interceptions of Patrick Mahomes. This NFL Week 15 outing has mismatch written all over it.

Jacksonville’s 31-10 loss to the Tennessee Titans this past Sunday represented the 12th consecutive defeat for embattled head coach Doug Marrone and Co. Of those 12 losses, half have come by double digits. All said this season, the Jaguars are being outscored by an average of 9.4 points per game. When going up against winning teams, that number inflates to nearly 12 points per outing. The Ravens have bounced back big time over the past two weeks after recent struggles, last week’s huge win over the Browns included. A 14-point spread is high for NFL Week 15. But we like Baltimore here.

Last week’s terrible performance against the Los Angeles Chargers represented the first time since Week 2 of the 2019 season and just the second time since 2017 that Matt Ryan has been picked off three times in one game. Having to go without Julio Jones in the mix played a role here. Ryan threw for just 100 yards with those three picks when not targeting Calvin Ridley. There’s a reason behind this statistic. That could very well make the difference in what should otherwise be a close game.

Since the start of the 2017 season, Jimmy Garoppolo has posted a 22-8 record while averaging 27 points per game in 30 starts. All other 49ers quarterbacks during that span are 6-27 while averaging more than a touchdown less per outing. Despite the Cowboys’ struggles prior to a Week 14 win over the hapless Bengals, this is a major storyline heading into Big D. Can San Francisco somehow get over the hump with mistake-prone quarterback Nick Mullens under center? Somehow, I doubt it.

It is absolutely absurd what Derrick Henry has done over the past couple years. He just recently broke the NFL record for the most career 200-yard, two-touchdown games by tallying 215 rushing yards against the Jaguars in Week 14. Thus far this season, Henry leads the NFL in attempts (297), yards (1,532) and touchdowns (14). He’ll be taking on a Detroit Lions defense on Sunday that has yielded the fourth-most rushing yards and a whopping 21 rushing touchdowns on the year. Tennessee at -9 seems to be a safe bet.

Here’s a stat for you. In Jalen Hurts first NFL start this past weekend, Philadelphia dropped 24 points in a win over the New Orleans Saints. It’s the most points the Eagles have scored since Week 6. It also came against a Saints defense that had yielded a total of 44 points in its past five outings. That’s some stunning stuff right there. This makes me think that the Cardinals at -6.5 might be a bit of a reach. While taking Philadelphia straight up might not make sense, expect the team to cover here.

Seventeen points. That’s obviously the largest point spread of Week 15. However, there’s every reason to believe that the red-hot Rams will cover against the winless Jets. New York ranks dead last in points scored and 31st in points allowed. It is being outscored by a disgusting 16.1 points per game. Meanwhile, the Rams have yielded the third-fewest points in the NFL heading into Week 15. With the Jets likely headed to a winless season and coming off a 40-3 blowout loss to Seattle, look for them to be embarrassed once again Sunday.

Prior to last week’s three-interception performance, Patrick Mahomes had thrown two picks in 463 pass attempts this season. What’s so shocking about this is the fact that Kansas City was still able to win its 23rd game in its last 24 tries against a darn good Miami Dolphins squad. That’s perspective right there. As we focus on this potential Super Bowl preview, it’s really hard to look past those glaring numbers and expect New Orleans to either win outright over cover. That’s especially true given the Saints’ recent loss to Philadelphia.

Prior to last week’s 26-7 defeat at the hands of the Los Angeles Rams, the Giants’ previous four losses had come by a combined 14 points. That included losing to another playoff contender in the Tampa Bay Buccaneers by two points back in Week 8. Heck, New York was riding a four-game winning streak heading into Week 14. The moral of this story? While the Browns should come out on top, it’s a game I wouldn’t bet the bank on. That’s evidenced by the mere four-point spread.

To say that Cincinnati is completely lost without Joe Burrow under center would be a dramatic understatement. This team has scored 14 points over the past two games and is being outscored by 35 points during that span. Whether it’s Brandon Allen or Jeff Driskel under center Monday night, I envision Pittsburgh rebounding after losing its past two games. Expect Ben Roethlisberger and Co. to cover, too.

The Los Angeles Chargers finally won a close game this past Sunday against the Atlanta Falcons. It came via a last-second field goal after more in-game coaching mistakes from embattled head man Anthony Lynn. Meanwhile, the Las Vegas Raiders were blown out 44-27 by the Indianapolis Colts. In their last two games against teams that are not the Jets, Jon Gruden and Co. have given up 87 points. Regardless of these facts, it’s hard to imagine a Chargers team playing for nothing going into Vegas and winning to start NFL Week 15.

It’s pretty amazing to look at. Broncos quarterbacks had thrown 14 touchdowns compared to 21 interceptions on the season heading into last week’s game against the Panthers. Drew Lock responded by tossing four touchdowns and zero picks. Will that translate to this Week 15 outing against a better Bills squad? I am not too sure. Buffalo has forced nine takeaways over the past four games. That should be enough for Sean McDermott’s squad to cover here.

Mismatches on top of mismatches. Following his three-touchdown performance against the Lions last week, Aaron Rodgers has tossed 39 scores compared to just four interceptions on the season. It’s the continuation of a record-breaking campaign for the NFL MVP candidate. On the other hand, the Panthers’ defense has yielded 23 passing touchdowns against five interceptions through 13 games. It really isn’t too hard to do the math on this one.