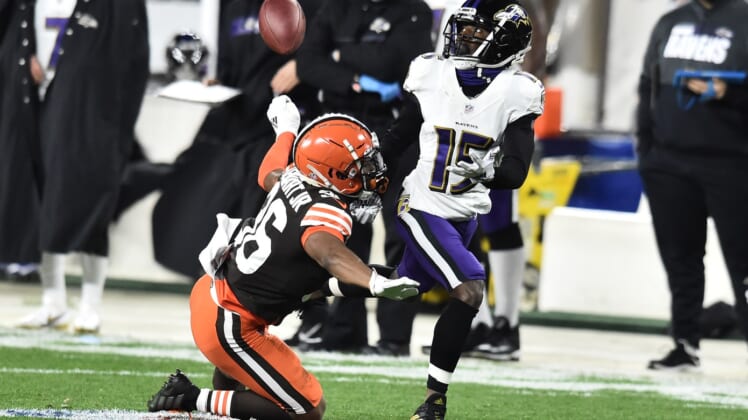 The Baltimore Ravens were in a desperate situation Monday night against the division-rival Cleveland Browns. Boasting a 7-5 record, Lamar Jackson and Co. needed a win.

It was not looking great. Jackson went down to cramps in the final stanza. He was ultimately replaced by Trace McSorley before Baker Mayfield led Cleveland back from a 34-20 deficit to take a 35-34 lead. With McSorley injured himself at the two-minute warning, Lamar Jackson came from the locker room facing a fourth-and-five.

In what has to be described as his very own Willis Reed moment, the reigning NFL MVP hit Marquise Brown on a 44-yard touchdown pass. It was something else.

After Baltimore converted on a two-point conversation to take a 42-35 lead, Baker Mayfield and the Browns’ offense had what seemed to be a signature moment. Boasting a 9-3 record on the season, this unit need to make a statement.

Cleveland’s offense responded by driving down the field 75 yards on four plays, capped off by this 22-yard touchdown pass from Mayfield to Kareem Hunt.

Having completed a combined seven passes prior to his team’s last possession of regulation, Lamar Jackson responded by connecting on his first four attempts to open said drive before spiking the ball at the Browns’ 37 with seven seconds left.

That’s when Justin Tucker came on and hit a 55-yard field goal to give Baltimore a shocking 47-42 win.

A lot was made of Lamar Jackson and his struggles heading into this game. He couldn’t get anything going from a passing perspective before returning from the above-mentioned injury. But after that, the reigning NFL MVP was nails.

By virtue of this win, Baltimore moves to 8-5 on the season and remains firmly in the AFC Playoff race. Cleveland moves to 9-4 after a sorely disappointing loss in front of a 12,000 home fans.