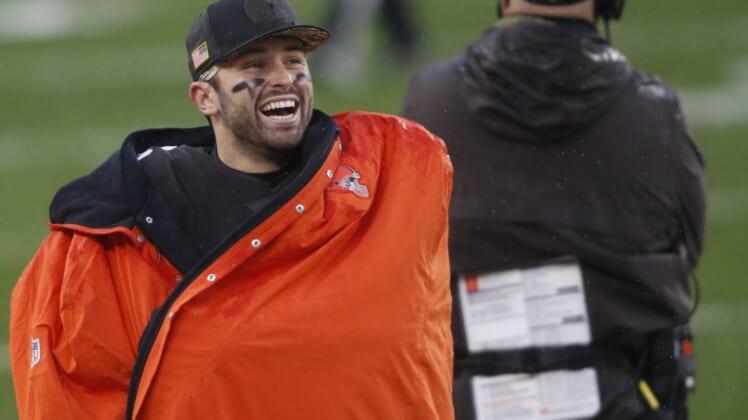 Cleveland Browns quarterback Baker Mayfield has been on the receiving end of criticism dating back to his days at Texas Tech and Oklahoma. Seen by some as a strong personality and a new breed of quarterback, skeptics were ready to jump on him at every turn.

Despite earning a Heisman in resounding fashion following his final season with the Sooners, these skeptics did not quiet down. Even when Mayfield was selected No. 1 overall in 2018 and turned in a record-breaking rookie campaign, those skeptics were still abound.

That’s why some were super excited to see Baker Mayfield struggle as a sophomore for then-Browns head coach Freddie Kitchens in 2019. To be fair, he was a complete disaster under center. The quarterback threw 22 touchdowns compared to 21 interceptions en route to being one of the reasons Kitchens was fired after just one season.

Enter into the equation first-year head coach Kevin Stefanski. Seen as a genius offensive mind, the Browns hoped that his presence would lead to a turn around from Baker Mayfield.

At least initially, it did not happen this season. Mayfield was downright terrible in a blowout 38-6 loss to the Baltimore Ravens in Week 1. He struggled with consistency over the next several weeks before turning it up big time. Now heading into Monday night’s contest against the Baltimore Ravens, Mayfield has an opportunity to prove naysayers wrong once and for all.

Over the course of his past two games, the third-year signal caller is completing 71% of his passes for 592 yards with six touchdowns and zero interceptions while boasting a 133.3 quarterback rating. Last week’s game against the Tennessee Titans saw Mayfield throw five first-half touchdowns en route to leading his team to an insurmountable lead and a 9-3 record on the campaign.

All said, Mayfield has not thrown an interception since all the way back in Week 7. That’s a span of 137 pass attempts. Given how turnover prone Mayfield was a season ago, this is a huge turnaround for the still greenish quarterback. This, while Baker Mayfield gains a new level of relationship with his wide receivers as Odell Beckham Jr. remains sidelined to a torn ACL.

“At the receiver position, it’s our job to be very detailed and precise in the pass game and be exactly where we need to be at all times and have consistency in that area,” pass game coordinator and wide receivers coach Chad O’Shea said, via the team’s official website. “I think Baker is trusting our guys to do that. He’s definitely shown that by his play.”

As a whole, the Browns’ status as a legit playoff contender is already etched in stone heading into this huge “Monday Night Football” game. That’s not really the story here. These Browns now have a real opportunity to prove their worth among the AFC’s best against reigning NFL MVP Lamar Jackson and Co.

There’s a major backdrop here for Baker Mayfield and Co., too. Baltimore sits at an unflattering 7-6 on the season and on the outside looking in when it comes to an AFC Playoff appearance. A home win by Cleveland would likely lead to the defending division champs missing out on the postseason altogether.

This is rather amazing stuff given that the Ravens defeated Cleveland by 32 points back in Week 1. At that point, more questions were raised about Mayfield’s status as a starting quarterback in the NFL. Jackson’s star was continuing to shine bright. All the while, murmurs persisted within Cleveland that this long downtrodden organization might have to start anew at quarterback for what would be the 30th time or so since it reentered the league back in 1999.

Fast forward a few months, and the narrative has changed big time. Perhaps, the NFL has figured out Lamar Jackson (story for another time). It’s even possible that those who criticized Mayfield were jumping the gun. Imagine that.

Overreactions in today’s social driven media world. Couldn’t be us. Wait, it could be us. In comparing these two quarterbacks thus far this season, the numbers couldn’t be more eye-opening.

Who would’ve thought? Sure a major component to Jackson’s game is his ability to run (669 yards, four touchdowns this season). Even then, Baker Mayfield has him beat from a passing perspective. Again, this is astonishing.

Overall, the Browns are off to their best start since Bill Belichick was manning the sidelines for this organization back in 1994. One year later, and the Browns ultimately became these Baltimore Ravens.

Now, more than a quarter-century after that, and Baker Mayfield has an opportunity to make sure his star shines bright while leading the Browns to league-wide relevance for the first time since before the quarterback himself was born.

Let that sink in.