The NFL Divisional Playoffs got going Saturday with two games. In the opener, Patrick Mahomes and his Kansas City Chiefs took out a game Jacksonville Jaguars team by the score of 27-20.

Mahomes found himself hobbled in the second quarter, suffering a high-ankle sprain. In shocking fashion, he returned to action and played pretty well. As for Jaguars quarterback Trevor Lawrence, this proved to be too big of a stage for him.

Speaking of struggling, the New York Giants got off to a slow start against the Philadelphia Eagles to conclude Saturday’s NFL Divisional Playoffs. They were down 28-0 at the half, pretty much ending any hope of advancing against the heavily-favored Eagles. In the end, Philly came out on top by the score of 38-7 to advance to the NFC Championship Game.

Here, we look at the 10 biggest winners and losers from Saturday’s action around the NFL as Kansas City and Philadelphia advanced to Championship Sunday.

Travis Kelce is a future Hall of Fame tight end. He’s proven for far too long that he just can’t be stopped or even slowed down, even when Patrick Mahomes is forced out of the lineup due to injury, as we saw on Saturday. Whether it’s Mahomes or backup Chad Henne, it didn’t seem to matter for one of the game’s best tight ends.

Kelce broke multiple playoff records, including setting the NFL’s single-game reception record for a tight end with 14. He would finish with 98 yards and also tacked on two of the team’s three touchdowns. While the Chiefs didn’t seem to flinch when Henne came into the lineup, one has to wonder how much Kelce’s presence helped stabilize the attack.

The NFL Divisional Playoffs were not friendly to Giants QB Daniel Jones after his record-setting postseason debut against the Minnesota Vikings last week. Jones completed 15-of-27 passes for 135 yards with zero touchdowns and one interception in Saturday night’s 38-7 loss to Philadelphia.

Too often, it seemed as if this stage was too big for Jones as he closed up shop on his fourth NFL season. He was out of rhythm all evening in Philadelphia, struggling to find open receivers and missing on multiple passes. One now has to wonder how this performance will impact his stock as a free agent in March.

Winner: Haason Reddick continues to do his thing

One of the most-underrated signings of last year’s NFL free agent cycle, Reddick spearheaded an Eagles defense that registered 70 regular-season sacks. He was one of four members of Philadelphia’s defense that had double-digit sacks.

Early in the NFL Divisional Playoffs, Reddick made his name known big time. That included two consecutive sacks on Daniel Jones, the last of which resulted in a turnover on downs. All said, Reddick tallied three QB hits, 1.5 sacks and one tackle for loss as Philadelphia’s defense put pressure on Jones throughout the night en route to advancing to the NFC Championship Game.

The Jaguars have several playmakers capable of stepping up. We saw it all season, whether it was Lawrence using his legs to move the chains, or relying on his leading receiver Christian Kirk, or even Evan Engram’s athleticism. Yet on Saturday, dynamic running back Travis Etienne didn’t receive enough opportunities to make a difference.

When he did receive the ball, Etienne averaged 6.1 yards per touch. He had just ten carries and three more receptions. If the Jaguars found themselves facing a large deficit, maybe a case could be made to abandon the running game, but there wasn’t really a reason not to continue feeding Etienne the ball, in any way they could.

It just doesn’t make any sense not to rely on your team’s leader in yards from scrimmage once you reach the playoffs. It’s something coach Doug Pederson will have to figure out over the offseason.

The Chiefs have struggled to find a leading tailback all season long. With players such as former first-round pick Clyde Edwards-Helaire, plus Jerick Mckinnon and Ronald Jones on the roster, instead, it’s seventh-round rookie Isiah Pacheco who led the team in carries and rushing yards this season.

It was the same story on Saturday against Jacksonville, where he averaged 7.9 yards per carry to rack up 95 yards. His number may not have been called often, but Pacheco made the most of each opportunity he received. 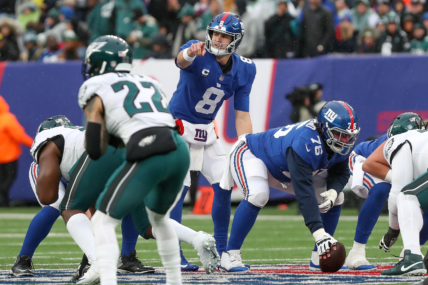 The very next drive saw Smith catch his own touchdown from Hurts to give the Eagles a two-score lead. They did not look back. Smith’s stat line wasn’t too great. He tallied six catches for 61 yards on nine targets. Even then, his early performance set the Eagles up well.

Loser: Where was A.J. Brown?

Brown might have caught a touchdown in his postseason debut with Philadelphia, but the high-priced receiver did very little after that. Adoree Jackson did pretty well covering Brown, yielding just three catches for 22 yards on six targets.

It might not have mattered against an inferior Giants team in the NFL Divisional Playoffs. But Philadelphia will need Brown to play a larger role in the conference title matchup against either San Francisco or Dallas.

There’s no doubt Jaguars return specialist Jamal Agnew was a big part of the team’s mild success in Kansas City. He accounted for a total of 161 yards, with 154 coming via kick or punt returns. Yet, it was his final touch, a three-yard reception that may have ultimately cost Jacksonville a chance at overtime at the very least.

Agnew caught the three-yard pass from Lawrence but lost a fumble that Chiefs linebacker Nick Bolton was able to recover. It came at a crucial point in the game, with the Jaguars at the five-yard line, trailing 27-17. In a game that finished with a final score of 27-20, it’s hard not to wonder what could have been had the Jaguars found a way to put another touchdown on the scoreboard instead of committing their first of two turnovers.

Related: 3 moves the Jacksonville Jaguars must make to contend in 2023

As expected, the story was all about Patrick Mahomes in the Jaguars versus Chiefs matchup. But not in the way anyone hoped or expected. Instead of seeing the NFL’s highest-scoring offensive attack run up the score, the Chiefs weren’t able to meet their season average of 29 points.

Yet, Mahomes missing a quarter of action while receiving treatment for his ankle sprain surely played a large factor. Then again, Chad Henne didn’t really miss a beat, promptly leading a 98-yard touchdown drive to keep the offense rolling.

Mahomes was rumored to have a high ankle sprain, which, depending on the severity, is typically a multi-week injury. But not for this former NFL MVP who’s looking to win his second Super Bowl. Mahomes somehow emerged after halftime and stepped right back into his starting role to complete the Chiefs’ victory. It was a day filled with drama, but the Chiefs are headed to the AFC Championship once again.

Speaking of setting the tone early, Daboll’s decision to go for it on fourth-and-8 from Philadelphia’s 40-yard line early in the first quarter was a decision. The conversion failed with New York down 7-0. Just over four minutes later, the Eagles would score a touchdown to go up 14-0. It was game, set, match from there.

Daboll’s decision to punt from the Giants’ own 42-yard line with his team down 28-7 early in the fourth quarter wasn’t a great look, either. He pretty much threw in the towel, setting the tone for the remainder of the game in what was a 38-7 loss in the NFL Divisional Playoffs.