3 moves the Jacksonville Jaguars must make to contend in 2023

Doug Pederson and the Jacksonville Jaguars finished up their surprising season Saturday evening, losing to the Kansas City Chiefs in the AFC Divisional Playoffs.

Jacksonille had won six consecutive games heading in and made it to the second round of the NFL Playoffs after completing an historic comeback against the Los Angeles Chargers during wild card weekend.

While Jacksonville ended up being one of the feel-good stories of the 2022 NFL season, there’s still a lot of work for general manager Trent Baalke and Co. to do this spring. Below, we look at three moves the Jaguars must make to be seen as legitimate Super Bowl contenders next season.

However, there was one glaring hole in the secondary. Andre Cisco gave up an absurd 75.9% completion mark and 117.4 QB rating when targeted. He also gave up four touchdowns on 29 targets.

Enter into the equation free-agent safety Jessie Bates of the Cincinnati Bengals. He’s likely going to be calling another city home in 2023 after playing under the franchise tag this season. The 27-year-old former Wake Forest star was brilliant in coverage, giving up a mere 76.1 QB rating while picking off four passes. If Jacksonville can find a way to land him, this would complete a strong secondary.

As we saw late in the season following the injury to left tackle Cam Robinson, depth and versatility became an issue on Jacksonville’s offensive line. Trevor Lawrence was hit seven times and sacked twice in the Jags’ AFC Divisional Playoff loss to Kansas City. A ton of the pressure came from the interior. 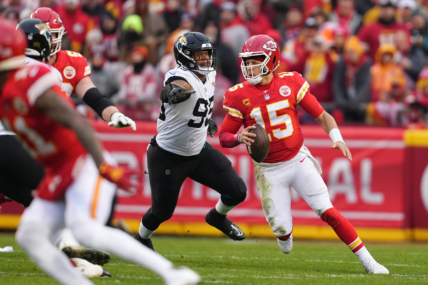 With Jacksonville an estimated $20.96 million over the cap, it must do some work in order to be active in free agency. Even then, going after a top-end guard like Chris Lindstrom doesn’t seem to be in the cards. Instead, the Jags target a versatile guard in that of Daniel Brunskill from the San Francisco 49ers. Brunskill has started 42 games at four different offensive line positions throughout his four-year carer. He could initially slot in at left guard or be Jacksonville’s sixth offensive linemen.

As noted above, Jacksonville is not in a great cap situation. The team can save $24 million by releasing cornerback Shaquill Griffin and wide receiver Calvin Ridley, the latter of whom was suspended for the entire 2022 season. Perhaps, Baalke and Co. figure that Ridley is not worth the risk and looks for an upgrade at wide receiver.

Trevor Lawrence proved himself to be a franchise quarterback as a sophomore. The likes of Zay Jones and Christian Kirk performed well this past season. However, netting him a true No. 1 pass-catcher via a trade should be in the cards here.

We’re specifically looking at Arizona Cardinals star DeAndre Hopkins. The All-Pro will more than likely be traded this offseason. He has the capability of elevating Jacksonville’s offense to new levels. Hopkins is averaging 85 receptions for 1,130 yards throughout his 10-year career.